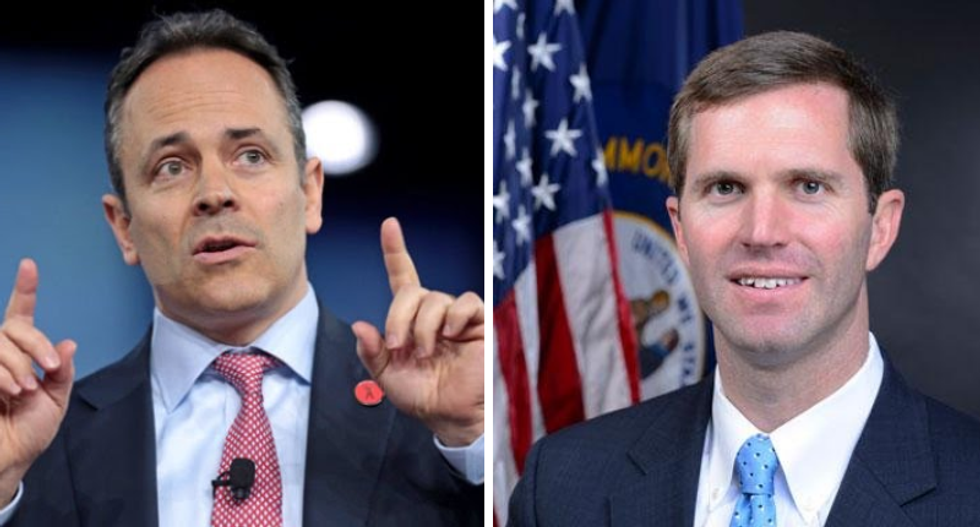 Of all the wild turns 2020 could have taken, I doubt anyone had "Kentucky's new governor becomes a sex symbol during the coronavirus crisis" on their bingo card, but here we are. Or rather, here we were until Democratic Gov. Andy Beshear, 42, delivered a loving yet stern call-out during his press briefing Wednesday to defiant bingo halls that weren't closing to enforce social distancing to reduce the spread of COVID-19. These updates, live-streamed daily at 5 p.m. Eastern time, have become must-see and -listen events for Kentuckians thanks to Beshear's combo of trustworthy information, empathy, and uplifting we're all in this together messages. "If you are a bingo parlor in Pike County, you ought to be closed by the end of today," he said, with unmistakable concern in his eyes. "Those parlors cater to an older and more at-risk crowd." Forget being brave enough to face the toilet paper-hoarding supermarket crowds, there's a new benchmark for courage: Andy Beshear's not scared of angering stir-crazy grandmothers in order to protect his people.

"Govern me, daddy," cracked Natasha Collier of Lexington on a Reddit thread in response to Beshear's decisive leadership. When I reached out to ask her about her post, Collier told me that was her response to "a lesbian friend of mine who said that she was starting to develop a crush" on Gov. Beshear too. They're not alone; just in my social circle I've noticed Andy Thirst where before none existed. Turns out competence and empathy, perhaps, are the biggest turn-ons.

During Beshear's daily talks — a sort of Fireside Chat for the Facebook Live era — the governor gets visibly emotional about the sacrifices Kentuckians are making with regard to their livelihoods, extended family contact and religious practices in order to help flatten the curve. He mourns the Kentuckians who have died from the virus (there have been three fatalities so far). He talks openly and directly about why mental health is important too, and why empathy and caring for others is non-negotiable. He coaches folks applying for unemployment about processes and deadlines and reinforces that there's no stigma in filing for assistance. When needed, he scolds. On Saturday, Beshear all but shamed a company by name that bragged about offering employees six weeks of unpaid sick leave. "Please don't be that organization that acts like you're doing something great when your people need so much more from you," he said. He's not mad; he's just disappointed. And constituents stuck at home, anxious and restless, are getting extremely horny for this big dad energy.

How thirsty are some Kentuckians now for the Democrat who beat roundly despised authoritarian Republican Matt Bevin in a squeaker of an election last November? "Like I just ran a marathon in the Mojave," a fellow writer and Kentucky native explained to me. "It's like hot Mr. Rogers explaining calmly that the world is in fact on fire, but he definitely knows where the extinguisher is and also he's gonna teach me to stop, drop, and roll."

Here's where we stop to acknowledge that yes, Andy Beshear is by most standards a conventionally handsome man. And yet his emergence as a sex symbol during this anxious time doesn't actually seem to have much to do with his looks, which I would describe as "former captain of your hometown's least-druggy high school sports team." If church and court are your thirst-trap hot spots — he's both a deacon and a lawyer and dresses like it — then sure, this tracks. But let's be clear: Andy Beshear is the clean-cut son of a former governor, not a parking lot skateboarding, punk band bass-playing erstwhile bad boy like Beto O'Rourke. And yet, given the responses I've observed over the last two weeks as he's led Kentucky's efforts to be proactive and transparent in fighting the spread of COVID-19, Beshear now has a standing invitation to step on many necks — even as it is widely understood that he, a married father of two, would never, which is surely also part of the appeal.

"It's rather a shock to see someone so calm and in command. It takes a little jolt of levity and thirst memes to remember what a competent leader looks like," Randy Blevins of Louisville told me. "But would a little 5 o'clock shadow kill you, Andy? So we know you've been working those late nights."

Plenty of the love for Beshear is fatherly or platonic, of course. A Facebook group, "andy beshear memes for social distancing teens," has become a go-to repository for images comparing Beshear to everything from the Mandalorian (babysitting Kentuckians, represented by Baby Yoda) to Disney's "The Lion King" father Mufasa (Kentuckians are Simba, of course). He's cast as Jason Momoa tackling Henry Cavill standing in for a bingo parlor. By decree of the admins, the memes are supposed to be wholesome, and mostly they are. Nevertheless, innuendo persists. In one post, "SNL" star Pete Davidson is cast as Andy Beshear with Kentuckians represented by Ariana Grande, licking a lollipop and looking up at him in unfiltered lust; an image of Jeff Goldblum suggests that while Beshear is focused on keeping Kentuckians safe, some constituents wish he would, um, sexually choke them at the same time.

Some of the Andy thirst is likely an involuntary, biological release: a response to imagining Bevin still in office during this crisis, and breathing a deep sigh of relief at having Andy's normcore, science-positive calm instead. (Bevin, who took his kids to "chicken pox parties" instead of having them vaccinated, tweeted snarkily about "Chicken Little" on March 11 and has been mostly silent since.) And it's hard not to compare Beshear's model of leadership — empathetic, steady, informed, dismissive of politics right now — to Donald Trump's petty and chaotic pressers and tweets.

But I think it's a mistake to interpret this phenomenon as a purely partisan response. In an incredibly difficult and destabilizing time, Andy Beshear is modeling a masculinity that stands in direct opposition to what pop culture, at least, has told us we'd be drawn to when the shit goes down. The world's order begins to fray, the zombie apocalypse prestige dramas tell us, and the scared and lost automatically gravitate toward the strongmen, the violent enforcers, the armed vigilantes — especially in a conservative state like Kentucky, which Donald Trump is predicted to win handily in November. Fear of the unknown has sent gun sales surging in Kentucky, it's true. But we're no longer living in a hypothetical TV simulation. COVID-19 is real, and it's deadly. And in the midst of so much fear and uncertainty, with people worried for their lives and jobs and what's going to be left of our economy and society when this is all over, Andy Beshear is standing on TV every day, repeating that we are stronger when we work together and all play by the same rules. And he's reminding his constituents that when they feel overwhelmed, they should breathe. Heavily, apparently, if necessary.