Is America's largest evangelical denomination about to get even more conservative? 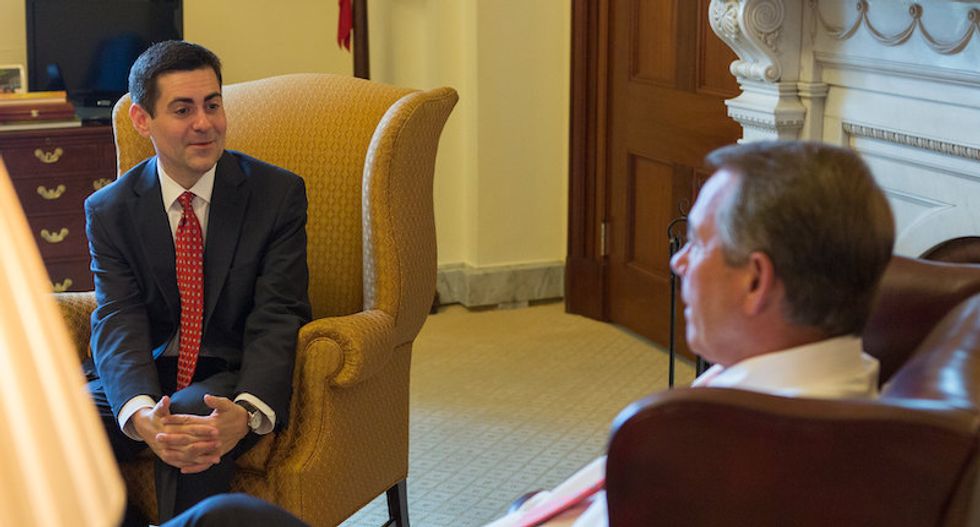 Russell Moore, the embattled head of the ERLC, chats with former Speaker of the House, John Boehner in 2013. Image: Bryant Avondoglio/flickr

There is perhaps no easier way to illustrate the history and present realities of white evangelicals’ pluralism problem than by turning to the Southern Baptist Convention. These days, the range of acceptable political opinion among white Southern Baptists ranges approximately from very right-wing to ultra right-wing. But even as the SBC struggles to come up with an effective response to numerous cases of abuse and coverups that have come to light in recent years, some of the prominent ultra-right-wingers are clamoring to suppress the merely very right-wingers, whom they disdain for being “too liberal” and blame for declining finances in the SBC’s central structures.

The primary target of the ultras’ ire is Russell Moore, head of the SBC’s Ethics and Religious Liberty Commission, a body that was formed on the foundations of the older Baptist Joint Committee for Religious Liberty (with which the SBC cut all ties in 1991) and the Christian Life Commission. The ERLC’s founding was part of the culmination of the SBC’s so-called “conservative resurgence,” a purge of liberals from SBC leadership and institutions that dominated SBC life in the 1980s and 1990s. The hostile takeover was led by men like Paul Pressler, who stands credibly accused of molesting boys over decades, and Paige Patterson, who was disgraced in 2018 when audio surfaced of him counseling an abused wife to stay with her husband and to try to change him through prayer.

As Boston University Professor emerita Nancy Ammerman and the SBC moved in divergent ideological directions in the 1980s, she became a scholar of the denomination she grew up in. As a young sociologist, Ammerman sought to understand the processes that fuel a denominational split, and her efforts yielded critical documentation of how the “conservative resurgence” played out.

On her telling, the Baptist Joint Committee and the Christian Life Commission “were the prime whipping boys for the conservatives in the 80s.” The question thus inevitably presents itself: might the ERLC now, in the continuation of a toxic trajectory that began decades ago, be the target of a purge of the SBC’s very right wing carried out by its ultra-right wing? RD turned to Ammerman for insights into parallels between the 1980s and the present and where the SBC may be headed from here.

Tensions are clearly brewing again. Hardliner William Harrell, a retired SBC leader who oversaw the denomination’s break with the Baptist Joint Committee, has publicly accused Moore and the ERLC of ceasing to represent the interests of the general SBC membership. It’s hard to escape the conclusion that, in a certain sense, he’s right. Moore has criticized Christian support for Donald Trump, but, Ammerman notes, “Like the rest of white evangelicalism, [the SBC leaders have] hitched their star to Trump, and so long as he is dominating the conservative landscape, that’s where they will fit in the larger American landscape. And that’s a niche that is increasingly defined by white privilege and by race.”

Moore is well known for his advocacy of “racial reconciliation,” an approach that some critics find falls short of robust anti-racism. Even so, Moore managed to bring a number of non-white churches into the SBC fold, a legacy that is now in question as the SBC is largely defined by Trump support. Ammerman says that from what she can see, the conservatives who are looking to remove Moore are “pretty explicitly pro-Confederate South.” The racism in the SBC, she contends, is closer to the surface now than it was even in the 1980s. Per Ammerman:

A big question for me is what the African-American churches that have come into the SBC in the last twenty years are making of this allegiance to Trump and to the conservative Republican Party. And it’s up for grabs also what the younger and better educated members of the denomination are going to make of it.

Moore’s right-wing bona fides include defining pluralism and feminism as “problems in the church.” Even so, there are many in the SBC who find Moore’s criticism of Donald Trump, and, it seems, even Moore’s willingness to insist publicly that abused spouses should leave their homes and call the police, unforgivable. Says Ammerman of Moore’s response to the SBC’s domestic violence scandal, “He knew it would get him no acclaim with conservative Baptists and that it might get him into trouble.” Indeed, some pastors are defying SBC President J.D. Grear’s recommendation  by extending speaking invitations to Patterson, who clearly remains a hero to some Southern Baptists, despite his mishandling of sexual assault in Southern Baptist seminaries and the abusive theology he spouted to survivors of domestic violence.

Meanwhile, Moore’s ERLC is facing an investigation that SBC Executive Committee Chair Mike Stone claims is not aimed at removing Moore from his position. At the same time, however, Stone said that the investigation will most likely look into the question of whether the ERLC has outlived its usefulness. The ERLC’s Executive Committee’s response thus far is one of defiance.

Where will the SBC go from here? As America’s largest Protestant denomination, representing about 14.8 million people, this is a critical question as the SBC heavily influences evangelical publishing and institutional life, which in turn has an outsize effect on American politics.

The last time Ammerman attended an SBC annual meeting as a Southern Baptist messenger (that is, an official representative of her congregation) was in 1984. In 1985, when the fireworks really started, she attended as a scholar engaged in ethnographic participant-observation. “’85 was the first time that both sides really mobilized to get supporters to the convention,” she recalls, noting that the typical attendance of close to 10000 more or less quadrupled that year. If the forces arrayed against Moore want to force the issue, one path they can take is to draft a resolution for the annual meeting and then make sure their supporters attend en masse. Should they make preparations to do so, Moore and his supporters will have to mobilize their own backers for the showdown.

It’s impossible to say at this point exactly how likely this scenario is, but Ammerman considers it within the realm of the possible. Asked whether the SBC’s current response to its abuse crisis is adequate, Ammerman replied, “It can’t be, partly because of the independence of local Southern Baptist churches,” which makes it impossible to address abuse with “adequate coordination.”. Critically, this lack of coordination has thus far prevented the decentralized SBC, with its Byzantine administrative structures, from publishing a database of known sex offenders in SBC churches.

Patriarchy, too, is at the root of the problem, as the SBC does not allow women in leadership. Asked whether a theology of “biblical patriarchy” is inherently abusive, Ammerman hedges. “It is certainly a contributing factor in allowing men to get away with abusive behavior,” and, she adds, “Having women in the pulpit would probably change things.” Moore is opposed to allowing women in the pulpit. Yet that may not be enough to keep Moore and his ERLC safe from the ultra right-wingers.

The SBC’s “conservative resurgence” was essentially an authoritarian coup. Indeed, since the 1980s  authoritarianism has arguably become a defining feature of white American evangelicalism. Since authoritarianism is characterized by a paranoid need to identify both internal and external enemies, the vicious trajectory of an empowered authoritarian movement rarely if ever stops after a single round of purges. Meanwhile, the ends justify the means for the zealous adherents to a particular authoritarian ideal, who protect their reputations and that of the organizations they represent above those who inevitably fall victim to abuse in authoritarian environments.

Despite holding some inherently inhumane positions, Russell Moore has attempted to be a humane person in his leadership role in the SBC. If he is purged, this will be another clear indication that humaneness toward members of othered groups, and those on the lower rungs of the Christian Right’s preferred social hierarchy, is utterly unwelcome in today’s American evangelicalism.