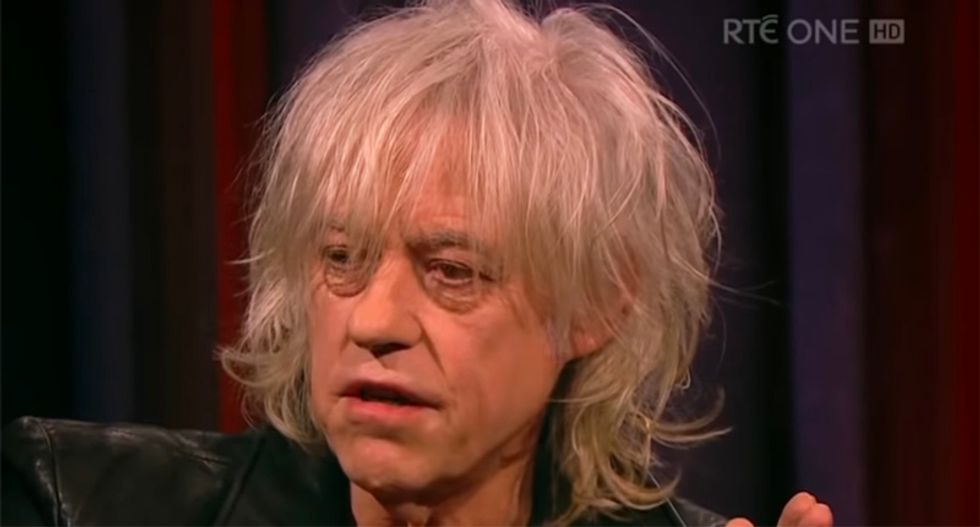 In a wide-ranging interview with the Daily Beast, Live Aid founder Bob Geldof hammered President Donald Trump before admitting that the president likely will be re-elected because he is in the process of reducing the "American republic to a state of infantilism."

After launching an attack at Prime Minister Boris Johnson as a "f*cking liar," the frontman for the Boomtown Rats, was asked about Trump and his re-election prospects and admitted that the Democratic Party is blowing its chance to take him down.

"We’re in the midst of a great failure of the absolutely pathetic Democratic Party. They’re a complete mess," Geldof offered. "There isn’t a single candidate there who can win. They need to stop this f*cking health care for all, and climate reduction. That’s not going to happen, so stop saying it. I know young people want that, and they’re correct to want it, and America deserves it, but it’s not going to happen in the term of a presidency, and it’s not even aspirational—not when the other side operates the way they do."

"Otherwise Trump will reduce the American republic to a state of infantilism and a plutocracy run by the very few, very wealthy, to its own ends. We’re looking at something exactly like the fall of the Roman Empire. This is just pre-the end. Trump has got fine populist instincts, and therefore, speaks to the moment. But he is a vulgar fool, and a very dangerous one," he continued.

Turning to how Trump has run his businesses, the musician remarked, "The lies about the economy he tells, at a cost of $1.9 trillion in debt, are just him behaving exactly as he’s always done: He borrows, the business is shit, it goes bankrupt, and he calls Chapter 11 and screws everyone who gave him money. America can’t call Chapter 11. What will get screwed are the people of America."