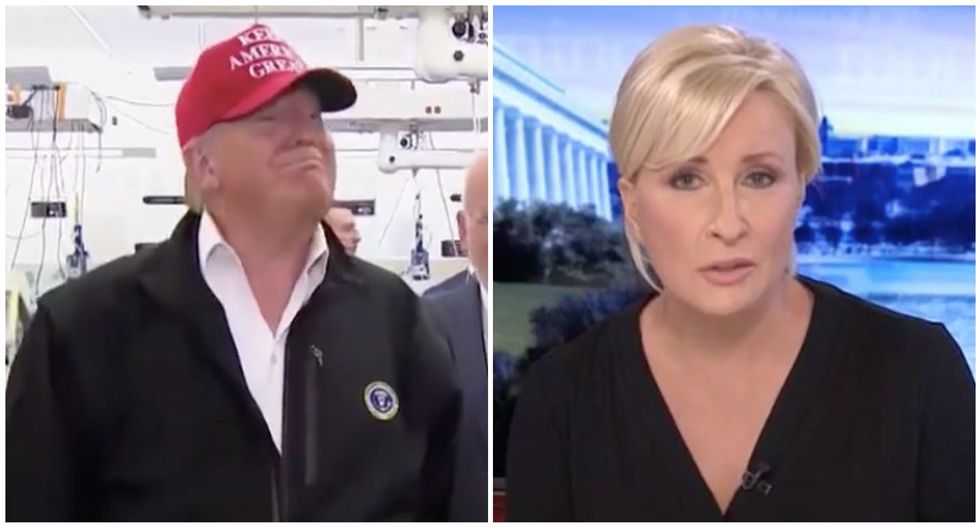 MSNBC's Joe Scarborough and Mika Brzezinski worried about the health of all three men running for president amid the global coronavirus outbreak.

The "Morning Joe" co-hosts warned the president that his lies would eventually catch up with him once the virus starts infecting his supporters -- especially older supporters with underlying health issues.

"Things are getting more dangerous," Scarborough said. "I must say, if you look at demographics, it actually gets more dangerous for all Americans, but for those Americans in their 60s and older, it is more dangerous. A lot of those people are Trump supporters. Donald, you can say whatever you want to say in the White House, but your supporters that are 60 and older are going to go to their doctors and doctors will say you're lying. They'll believe their doctors over you. You need to start telling the truth every day."

Trump and his Democratic rivals Joe Biden and Bernie Sanders are all in their 70s, and the co-hosts wondered whether they were taking enough steps to protect themselves from exposure to the virus.

"The three men who are most likely to be the next president of the United States are all in their 70s," Scarborough said. "At least two of them are not in peak health, they have underlying conditions. The president, of course, is obese. He's not in good shape."

"You can see by the morbid obesity," Brzezinski said. "That is clear."

"You can see the obesity, you can see by his diet that he is not healthy," Scarborough agreed. "He is not in good shape. Bernie Sanders had a heart attack, he has an underlying condition. We don't know about Joe Biden's cardiac health, we don't know. We know one thing, they're all in their 70s. None of them look to be in tip-top shape, and they're all, of all the people who are likely to have a severe reaction to coming in contact with a coronavirus, they're all right in the center of that bullseye."

"So the question is this, Mika, I mean, do they continue campaigning?" he added. "Do they continue going around shaking hands? Do they ignore the advice of Dr. [Anthony] Fauci? Or do they start doing what Ted Cruz and others are doing and back off and actually start quarantining themselves? Their doctors are going to have to answer that question in the next few days."