MSNBC’s Morning Joe: Trump could do a better job on coronavirus -- if he'd only stop doing this one thing 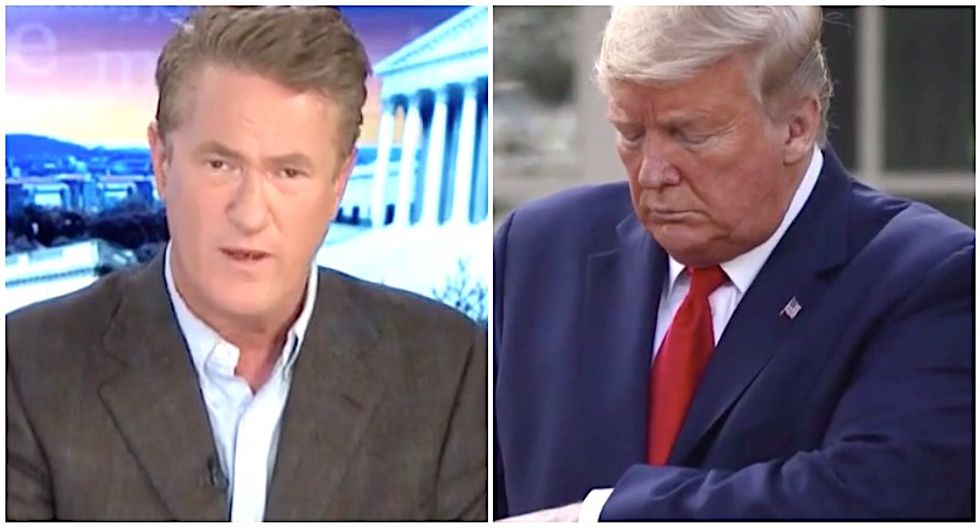 The "Morning Joe" host hammered the president's refusal to admit that testing still -- after weeks of promises -- remains far below what's needed to fight the outbreak, and said those denials are putting lives at risk.

"This is where his alternative facts and his alternative reality costs lives," Scarborough said. "I mean, this is a good example of an audio tape that, I think, historians could key in on, to talk about his failed leadership."

A recording released Monday showed Trump denying a testing shortage after governors asked for more during a conference call, and Scarborough said that disconnect was inexcusable.

"When the president lies yesterday in a call with governors," Scarborough continued, "where you have Dr. [Anthony] Fauci saying, 'What do you all need? Are you able to do tracing?' and a governor articulately explains in detail the crisis they're having in their state -- they're always one day away from getting testing, and that the federal government actually crushes their efforts to get testing -- and then the president of the United States comes in and he does that sort of rote response. 'I haven't heard about testing in weeks, we have beautiful testing, blah, blah, blah, blah.'"

Scarborough demonstrated how easily Trump could have offered competent leadership simply by telling the truth.

"It is just so reckless," he said. "The correct answer is, yes, there is a shortfall, we're doing everything we can to bring it up to line. Governor, we're going to make sure that we don't step on you, that the federal government doesn't step on the states. We're excited about Abbott Labs' five-minute testing, they're going to have dozens of points across the United States. I mean, that's what a leader would do. In this case, you actually have the president of the United States lying, saying he hasn't heard about testing in weeks."

"I don't bring this up to be partisan," he added. "I bring it up to say, he can't act this way. We are at war. That would be like a general being pinned down against the Nazis, you know, as he's moving toward Berlin, and calling and saying, 'We don't have any air support,' and headquarters saying, 'Oh, I haven't had anybody complaining for weeks about not having air support, you have beautiful air support,' while people are dying on the ground. We can't afford alternative realities. We can't afford rote political speeches, we can't afford lies. We need action."