Nicolle Wallace cracks up laughing at Donald Trump Jr. desperately trying to get his own 'mud wrestling match' debate 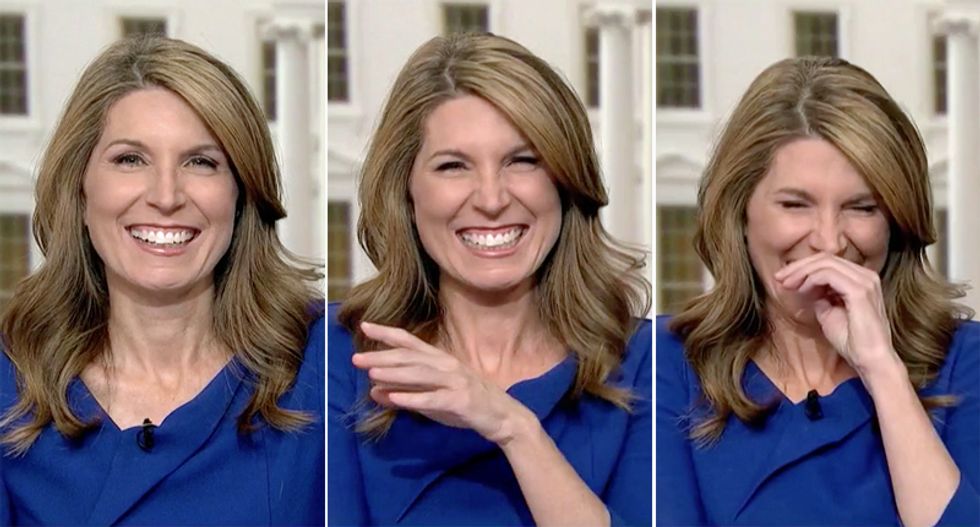 MSNBC host Nicolle Wallace and her Tuesday political panel cracked up laughing at the idea that Donald Trump Jr. is desperately trying to be relevant in the 2020 presidential race.

Sunday, Axios for HBO did an interview with the eldest Trump son, saying that he was challenging Hunter Biden to a debate over which one is the bigger grifter. Neither man is running for public office, though Trump Jr. has indicated he would like to run.

Cartoonist Jesse Duquette posted the curiously long list of family members who seem to have positions in the Trump administration, which has been tweeted to Trump Jr. several times since the interview.

"Well, if you look to the Malia Obama and Megan McCain debate how this could be decided," joked Mark Leibovich, the chief national correspondent for The New York Times Magazine. The rest of the panel broke into hysterics.

"To Eddie's point, there is a serious point about Trump benefits by the a asymmetrical way, in which he takes on his opponents," Wallace agreed. "I think Joe Biden needs to clear his family's name and whether it's sticking -- I don't know what junior has in mind. Like a mud wrestling match or arm-wrestling match? I don't know what he was saying there. This is some need to not ignore it, I think, right?"

Leibovich went on to say he can see why Trump wouldn't want to relitigate something that got him impeached and instead make it about Hunter Biden. Meanwhile, he said the elder Biden likely wouldn't want to stoop to the level of Don Jr.