Donald Trump Jr. swears he’s not a grifter -- even after the RNC and conservative groups bought out his book in bulk 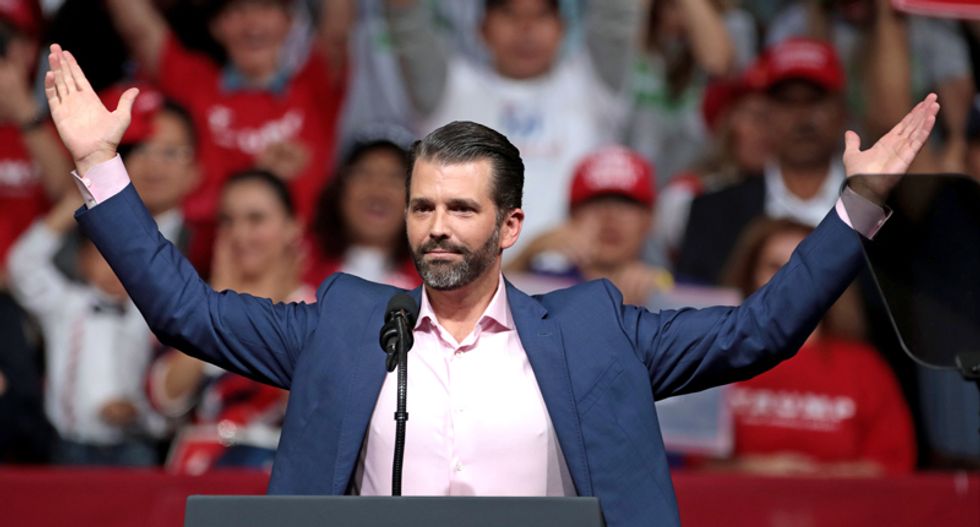 Donald Trump, Jr. at a campaign rally in Phoenix, photo by Gage Skidmore

In an interview with Axios, Donald Trump Jr. swore that he isn't a grifter, a complaint often lodged at the president and his children for profiting off of President Donald Trump's time in office.

"We can go full transparency, we show everything, and we can talk about all of the places where I am supposedly grifting, but Hunter Biden isn't," said the younger Trump.

Neither Don Jr. nor Hunter Biden is running for elected office. It's unclear why the president's son is trying to make the campaign an issue between the children of the politicians instead of the officials themselves. The last living Biden son has also never worked for his father's company.

Don Jr.'s sister and brother-in-law are both loosely employed by the White House, which is generally seen as against nepotism laws. The president got around it by not paying them from the federal government.

It was revealed Thursday that Jared Kushner and his wife Ivanka would profit about $25 million to 50 million from the president's tax bill, for a provision that benefited the Kushner development projects. After two years, Kushner said he would be happy to divest from the company. It comes only now that the profits are so high.

In the case of the president's son, it was revealed that his recent book Triggered was purchased in bulk by the Republican Party and nine other conservative groups. As a result, it drove the pre-sales up, so it appeared on the New York Times Bestseller list. It's unknown how many total copies of the book were bought out by conservative groups and how many individuals actually purchased the book.

A grifter is generally defined as someone "engages in petty or small-scale swindling."

Axios reporter Jim VandeHei asked if the younger Trump meant he was willing to turn over his taxes.

"If we do it both, 100 percent," Don Jr. said. "Let's talk about who profited off of whose public service. Happy to do it. Let's make it happen."

It's an odd pledge, given his father has refused to do the same and ultimately could make his father look bad because it appears that he's hiding something when his own son is willing to publish his taxes.