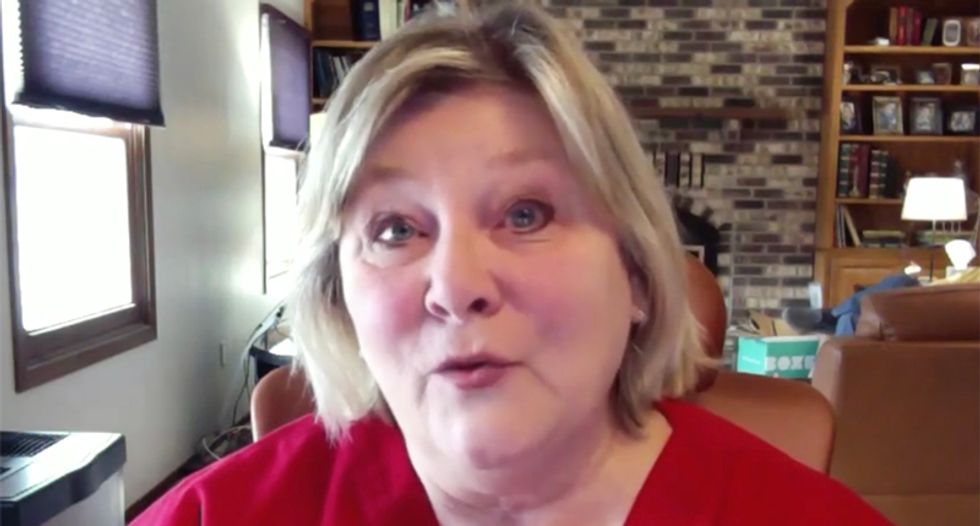 Appearing on MSNBC on Sunday afternoon, Jean Ross who heads National Nurses United lashed out at Donald Trump's administration for bumbling about getting healthcare workers the protective gear and ventilators they need to deal with coronavirus pandemic.

Speaking with host Alex Witt, Ross described what her colleagues are facing every day now that hospitals are filling up and facing critical shortages of personal protective equipment (PPE).

With host Witt stating, "The Defense Production Act, we know the president invoked it," she asked the nurse "What is it like being on the front lines of this pandemic?"

"Well, it is actually quite scary," Ross replied while speaking from her home. "We're being told by everyone from the White House to our employers to the CDC how valuable we are and how necessary, but actions speak and we are being treated as if we're expendable."

Pressed for details, she continued, "Well we asked repeatedly, we are begging, we're demanding the right and proper protective equipment, the PPE, we just did another national survey of out r nurses as of March 20th -- 55 percent still don't have access to N95 respirators on their unit and 27 percent have access to the powered air-purifying respirators. We are told that places are conserving because there is not enough and we know that will likely come to a head but right now we're not at that point -- so where is the equipment?"