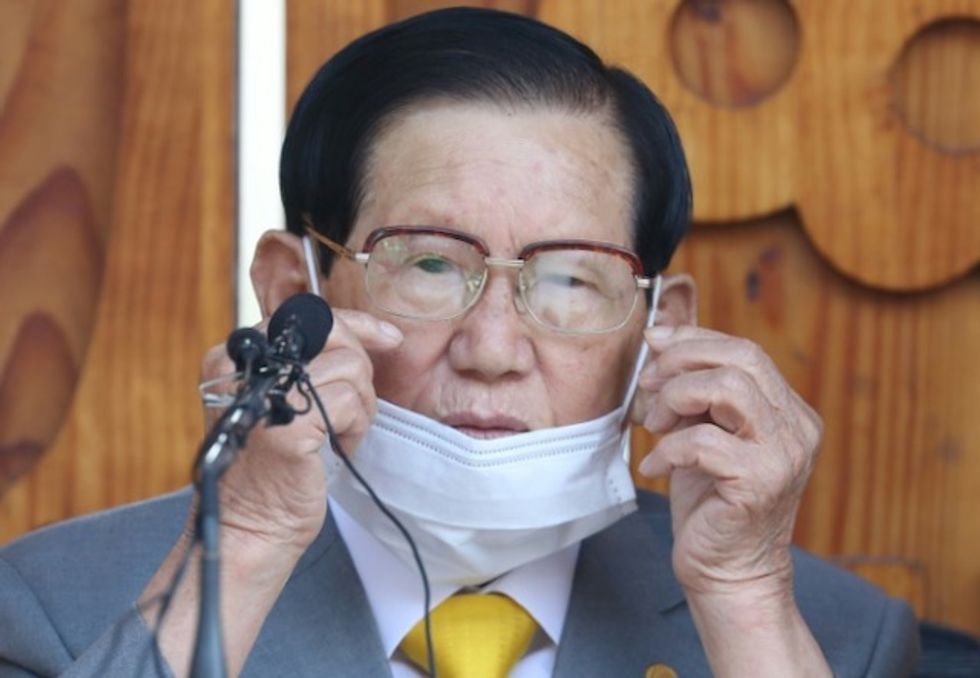 Investigators in South Korea are seeking to establish the extent to which 12 executives of the Shincheonji Church of Jesus can be held criminally responsible for the rapid spread in the country of COVID-19, the illness that results from the coronavirus.

He promises his disciples eternal life, fancies himself the new “messiah” and – as of Sunday – finds himself under investigation for homicide by wilful negligence. Lee Man-hee, 80, leads the Shincheonji Church of Jesus, a secretive religious sect often described as a cult and seen as largely responsible for the propagation of COVID-19 in South Korea. Eleven other executives of the movement are also in investigators’ sights.

Authorities want to know whether, due to its unorthodox religious practises and taste for secrecy, the Christian sect has put lives at risk during the coronavirus outbreak. With more than 5,000 people infected and at least 28 deaths to date, South Korea has registered the largest cluster of infections outside of China.

When the new coronavirus appeared in China in December, South Korea – a technologically advanced country with a well-organised public health infrastructure – thought it would be able to curtail the spread of the virus. Seoul had already succeeded in containing a 2015 outbreak of MERS, another coronavirus, which had surfaced in the Middle East in 2012.

But that was before South Korea encountered Patient No. 31. A 61-year-old woman who was a member of the Shincheonji Church of Jesus in the city of Taegu, she is considered to be at ground zero of the explosion of COVID-19 cases. Health authorities believe one in five of the people infected by the coronavirus can be linked to her.

The woman first went to hospital on February 7 after a minor traffic accident. During that exam, she complained of a pain in her throat. She then returned to hospital a few days later for treatment of a persistent fever.

Doctors twice recommended that she submit to coronavirus screening. Both times, the woman refused, the New York Times reported. But her health continued to deteriorate and, 10 days later, she could no longer refuse testing; on February 17, doctors examined her more closely and diagnosed a COVID-19 infection. They were never, however, able to establish how she had been exposed to the virus.

In the meantime, the patient had managed, twice, to leave the hospital temporarily to attend the Sunday gatherings of the Shincheonji Church of Jesus. Each time, she had contact with a thousand fellow faithful, the Japan Times noted.

“Her behaviour is not surprising to people familiar with the church,” said Chung Yun-seok, a South Korean expert on religious cults. “To them, getting sick is a sin because it prevents them from doing God’s work.”

The discovery of a hotbed of infection in Taegu and the link made with the Shincheonji Church of Jesus was a turning point in South Korea’s coronavirus battle. Authorities then came up against the very secretive practises of the sect. Aware of the group’s poor image within the country, the faithful often keep their membership secret from their relations, even from their parents.

“To Shincheonji members, their priority is not the safety issue but rather protecting" the church, Ji-il Tark, a Busan Presbyterian University theology professor who studies the group, told the Wall Street Journal. As such, in the province of Gyeonggi, the local government had to rely on some 200 volunteers from the movement in order to contact other followers, CNN reported, because Shincheonji members often don’t take phone calls from non-members.

The detective work necessary to identify everyone who came into contact with an infected member of the sect is all the more difficult under those circumstances. Church executives were accused of a lack of forthrightness: officially, they offered assurances that they were cooperating completely, but messages sent to members – later seen by South Korean media – advised them to lie about their membership in Shincheonji Church if contacted.

The group’s religious practises also lent to the rapid spread of the virus. They meet often in small halls, where they are huddled close together. Members aren’t allowed to wear any accessories on their faces – like glasses or protective masks – because they are considered insults to God, several former members of the movement told South Korean media.

Moreover, participating in weekly meetings is mandatory – rain or shine, and even in case of illness. Members of the movement must clock in when they arrive and when they leave a “working session”, which allows executives of the group to monitor devotees’ diligence. A cold or early signs of flu would not be considered sufficient to exonerate a member from doing his or her duty to preach the Good Word.

Petition to dissolve the movement

The movement is considered particularly aggressive in its proselytising. Several places of Catholic worship in the country have posted signs at the door forbidding access to Shincheonji Church of Jesus members, who are suspected of seeking to poach worshippers for their cause during mass, the South China Morning Post reported.

Sect leader Lee was vehemently criticised for his reluctance to cooperate fully with authorities in their efforts to slow the epidemic. For weeks, he refused to take the blame, saying even as recently as last week that COVID-19 was the work of those “jealous of the Shincheonji Church’s success”.

But after the launch of an official inquiry, the octogenarian finally came forward with a public apology, recognising that “although it was not intentional, many people have been infected”.

But is that mea culpa simply too little, too late? A petition signed by more than a million people has been presented to the South Korean government requesting the dissolution of the Shincheonji Church of Jesus, which counts more than 200,000 members.

This article has been translated from the original in French.