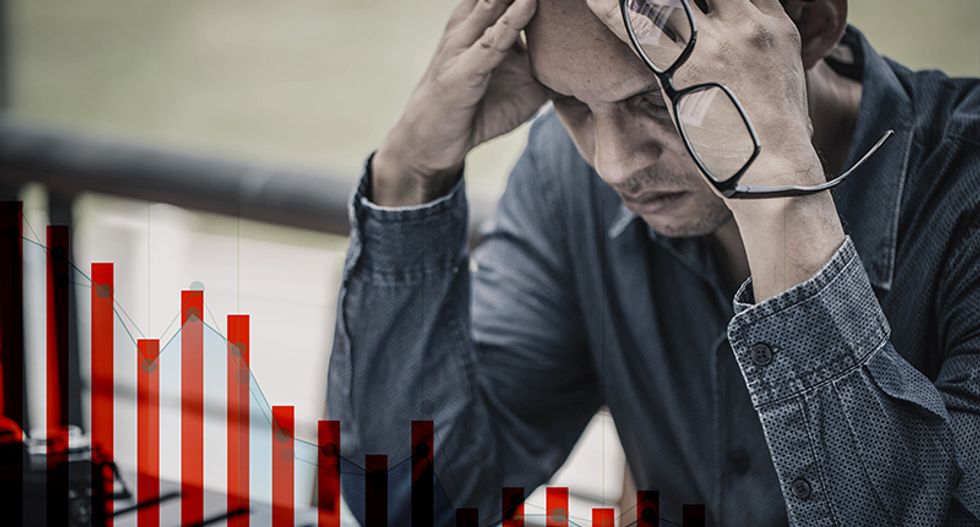 Equities and oil prices fell through the floor again on Thursday after Donald Trump banned all travel from Europe to the US for a month to fight the coronavirus, ramping up fears the global economy will careen into recession.

As the disease showed no signs of abating, claiming more lives and infecting more people around the world, the US president said in a rare address to the nation that the ban would be in place for 30 days.

The news came after the World Health Organization officially labelled the outbreak a pandemic and hit out at "alarming levels of inaction" for its spread.

Asian equity markets, already deep in the red in reaction to the WHO announcement, cratered after Trump's address.

Wellington was five percent down and Taipei gave up more than four percent. Shanghai was down 1.5 percent.

The Japanese yen, a key haven in times of crisis and economic turmoil, jumped more than one percent against the dollar.

"Travel restrictions equal slower global economic activity, so if you need any more coaxing to sell... after a massively negative signal from trading in US markets it just fell in your lap," said AxiCorp's Stephen Innes.

The losses followed another brutal session on Wall Street, with wave after wave of bad news, including Hilton withdrawing its earnings forecast and Boeing saying it would suspend most hiring and overtime pay.

The Dow fell into a bear market having lost more than 20 percent since its recent high, and futures pointed Thursday to another rout in New York and Europe.

The coronavirus outbreak has left virtually no sector untouched, though travel and tourism have been particularly hard-hit as countries institute travel bans and quarantine requirements, with Italy in a country-wide lockdown.

The number of cases across the globe has risen to more than 124,000 with 4,500 deaths, including a jump in fatalities particularly in Iran and Italy, according to an AFP tally.

In announcing the Europe ban -- which excludes Britain -- Trump said the continent had seen a surge in new cases because governments failed to stop travel from China, where the COVID-19 epidemic began.

He said the prohibitions would also "apply to the tremendous amount of trade and cargo," and "various other things as we get approval".

However, the White House afterwards clarified that "the people transporting goods will not be admitted into the country, but the goods will be".

Oil prices were also hammered, with both main contracts falling around six percent at one point before edging back slightly. The oil market was already under pressure after Saudi Arabia and Gulf partner UAE stepped up a price war with plans to flood the global markets.

"We are now staring at the whole world going into a lockdown," Vandana Hari, of Vanda Insights, said. "Oil demand can be expected to crash through the floor and all previous projections on oil consumption are now out the door."

The Saudi move was the latest escalation of a fight among oil producers after Russia balked at an OPEC-backed plan to cut production in response to lost demand because of the coronavirus.

"Markets are crying out for a co-ordinated response to COVID-19 headwinds and a lack of concrete US policy action is rattling markets," said Tapas Strickland, senior analyst at National Australia Bank.

But he did not unveil any large-scale tax cuts, which OANDA's Jefrey Halley said "has probably disappointed markets more than anything".

Katrina Ell, senior Asia-Pacific economist at Moody's Analytics, said the overall economic toll of the crisis has yet to be determined.

"While a health epidemic typically brings a strong revival in activity after containment, the COVID-19 outbreak has not reached that point, and the economic toll has increased," she said in a note.

The bloodbath across global trading floors has come despite a raft of measures by governments worth at least $150  billion to offset the impact of the disease, while central banks will be called upon to cut already low interest rates and introduce other fiscal measures.

German Chancellor Angela Merkel has said she will do "whatever is necessary" to help the economy, while the European Central Bank is to hold a policy meeting later in the day at which it is under pressure to open up the taps.