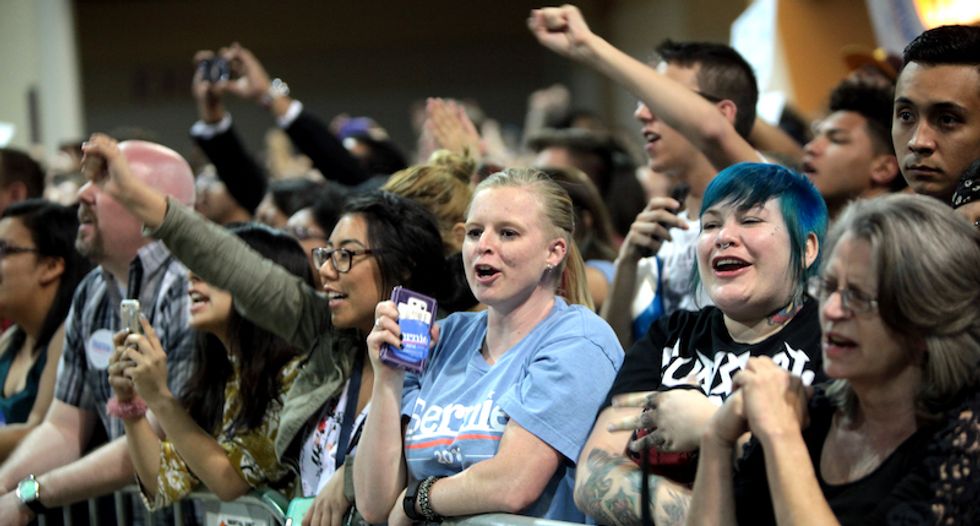 It's been noted that Bernie Sanders' youth revolution failed him on Super Tuesday. It's not so much that young voters stayed home, contrary to the headline on at least one article. In real numbers, more young voters turned out this year than in 2016 in most states. (The two exceptions were Alabama and, embarrassingly, Vermont.) But because so many older voters surged to the polls, the youth vote dropped as a percentage; in other words, its rate of growth didn't keep up that of older voters. Appropriately enough, Teen Vogue put it best:

As expected, Sanders won big with the young voters who did show up, but the youth vote continues to be outnumbered by older voter turnout across the country.

Even that might be somewhat generous. As USA Today notes, Sanders won a smaller share of the under-thirty demographic than he did in 2016 in several states.

It's worth noting this shift in a religion-and-politics column because young voters also tend to be less religious voters. By any measure, the younger an American adult is, the less likely they are to be attached to faith in terms of belief, self-declared importance, or religious practice.

So you might expect to see Sanders doing well in younger, more secular states, and that's certainly the case in places like California and Colorado, where both ages and rates of affiliation are on the low side. But it's not a strict rule: Sanders also cleaned up in Vermont, which is older but more secular (or most secular: it's the least religious state in the nation). And he did well in Utah, which is quite young, but also quite religious.

Likewise, it's true that Joe Biden did well in older and more religious states, but those aren't necessarily the same places. Maine, for example, is the oldest state in the nation, with a median age of 44.9, but it's also one of the least religious. Conversely, Alabama is one of the most religious states, but only somewhat older than average. Would it surprise you to hear that Minnesota, North Carolina, and Virginia are all about the same when it comes to age and religious affiliation? It's true: they're all modestly above average on both scores, and Biden won them all.

Sometimes, the pattern breaks down completely: American Samoa is both the youngest and the most religious of all the American states and territories—and it was won by Mike Bloomberg and Tulsi Gabbard.

As with partisanship, race, and region, then, it's important not to conflate age and religious views when considering how people vote. While it's generally true that young people are less religious and more liberal, that's not always the case, and there are many other factors that can confound the picture.

For example, Biden did very well in southern, more religious states, but he also did extremely well with voters who decided at the last minute; that is, those who hadn't already cast an early ballot, as is common in California and Colorado. It's possibly a testament to the power of Biden's recent surge that he was able to pull ahead in places like Maine and Massachusetts, where a coalition of young and faithless voters might otherwise be safely assumed.

Perhaps more important, Biden put together his winning margins in part by winning places like the suburbs of Boston, Washington, D.C., Dallas and Houston. That suggests an ability to attract the votes of disaffected Republicans and independents in areas where faith is still relatively important, a trait that would certainly prove useful in the general election. What it won't do is reassure the Sanders wing of the party, eager as it is to keep pushing Democrats to the left.

Nor, as Esquire's Jack Holmes puts it, is it probably enough to create a tidal wave of youth voting:

Certainly, there's little evidence Biden will turn out The Youth Vote in any big way. He got five (5) percent of voters under 30 in California, and nine percent of the 30-to-44s. ... Biden would struggle to turn these groups out in the best of circumstances, but they're also the most likely to be bummed out into non-participation by a Sanders loss. Biden is flatly opposed to many of the initiatives, like free public college and canceling student-loan debt and Medicare For All, that attract young people to Sanders.

We might say very much the same thing about non-religious voters. Biden seems to be in little hurry to protect reproductive rights, or to police a firm line between church and state. Rather, Biden's campaign seems to be based on personal characteristics: stability, competence, traditionalism. As Holmes says, Biden might have to proceed without massively inspiring young voters, and one wonders if he might have to do the same with the religiously unaffiliated, which is not only the largest religious category among Democratic voters, but among independents as well.

This points to the tensions of building coalitions. Biden has already managed the unlikely feat of pulling together older Black voters and suburban white voters, but of course, that's not the only divide facing Democrats or the nation as a whole. Moderate-to-conservative religious voters will be a necessary component of the winning team against Trump, and most non-religious voters will likely be okay with the kind of faith-talk that it will take to keep them on board. But in a nation that's increasingly diverse, not least along religious lines, it's unclear for how much longer young and secular voters, especially women and the LGBTQ community, will be willing to put up with having their issues pushed to the back burner.