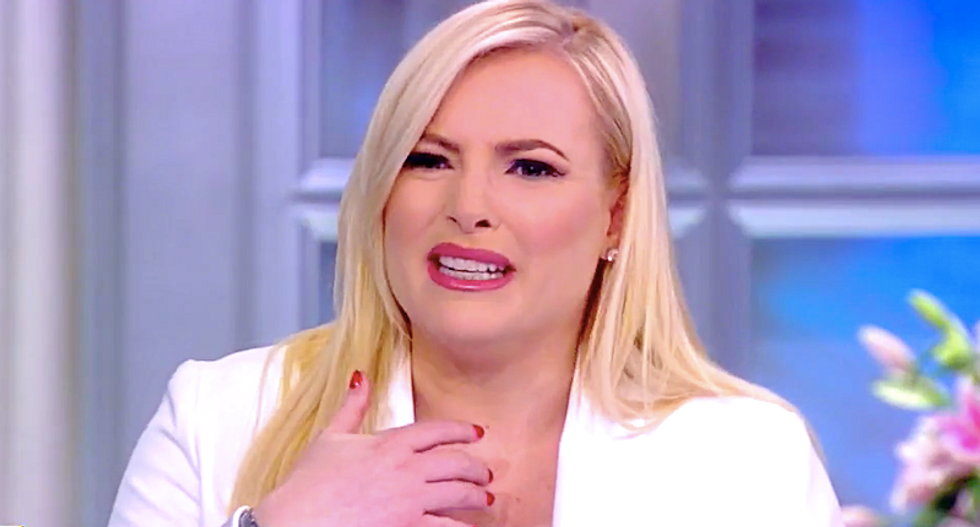 "The View" spun off the rails after co-host Meghan McCain rattled off a list of men in media who were accused of behaving badly.

The topic started with the abrupt retirement of MSNBC's Chris Matthews, who unexpectedly signed off for good after a years-old sexism claims resurfaced in recent days, and McCain was troubled by his abrupt departure.

"To reduce his entire career to this segment is really sad, because I thought he deserved a better sendoff than that," she said, "and I thought I might be raked over the coal for saying that today. That doesn't mean his behavior should be absolved, it doesn't mean that he should not apologize and his feet not be held to the fire, but a lot of people at MSNBC have done a lot of crap."

"Are they as bad as Fox [News], do you think?" co-host Joy Behar asked.

McCain, who previously worked for Fox News, quickly fired back.

"Mark Halperin put his, allegedly, erect penis on a woman's shoulder, and he was fired," McCain said, as the audience reacted in disgust. "Yeah, look it up."

"Talking about Brian Williams, who had stolen valor, and lied about having service in Iraq," she added. "True story, and he worked at NBC. A lot of people at NBC who have done a lot of bad, dirty things, and we've talked about it on the show a lot."

Host Whoopi Goldberg said Matthews, who is 74, came from a different era, when men felt they could get away with commenting on women's looks in the workplace, but co-host Joy Behar said that behavior wasn't as widespread as some men like to claim.

"We never heard those comments from Walter Cronkite," Behar said. "I'm just saying, there are some men who didn't do it."

Goldberg pointed out that some men behaved poorly but were never publicly outed, and then read a legal disclaimer pointing out that Halperin had denied making unwanted physical contact with his former colleagues in the media.

Goldberg agreed the allegation was "pretty gross," and compared that accusation to the coverage of their own behavior on the show.

"In all of our stuff," Goldberg said, "we haven't done any of that."

China defended its handling of the coronavirus pandemic Tuesday but said it would "strive to do better" after independent experts criticised the speed of its response to a virus that has now killed more than two million people worldwide.

Beijing has faced international criticism for an alleged lack of transparency after the virus emerged in the central city of Wuhan in late 2019 and for stifling whistleblowers who tried to raise the alarm.

Documentary filmmaker Ken Burns is alarmed by the exposure of democracy's fragility, but he has plenty of reasons for optimism.

The filmmaker has documented three major crises in U.S. history -- the Civil War, the Depression and World War II -- and he believes Americans may be living through a fourth, and worst, historic crisis, reported NPR.

An estimated 12 percent of people in England had been infected with coronavirus by December last year, up from nine percent in November, according to official antibody data released Tuesday.

One in 10 people in Wales, one in 13 in Northern Ireland and one in 11 in Scotland were also estimated to have caught the virus, according analysis of random blood test results published by the Office for National Statistics (ONS).

Kremlin dismisses calls to free Navalny -- and warns against protests