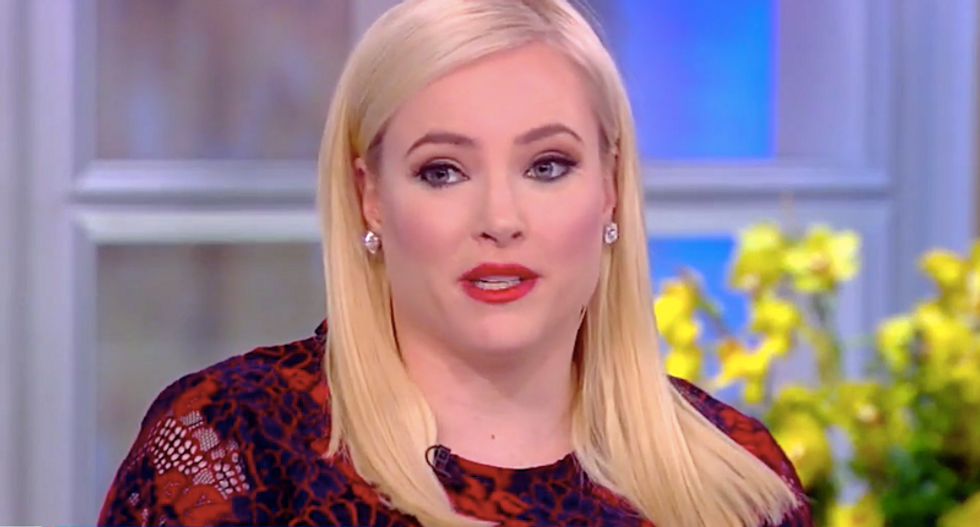 "The View" co-host Meghan McCain joined her colleagues in trashing President Donald Trump for his dismissal of the coronavirus as a threat.

The show opened with the women talking about Rep. Matt Gaetz (R-FL) being delivered some instant karma. At the end of last week, Gaetz mocked the coronavirus by walking around the U.S. Capitol in a gas mask. Now he's under self-quarantine because he came in contact with someone infected with the virus.

In between his gas mask incident, Gaetz also traveled with President Donald Trump on Air Force One. Trump has already indicated he's concerned that reporters will get the disease intentionally and give it to him on the plane. The president didn't comment about his interactions with a CPAC attendee who has been diagnosed with coronavirus or contact with Matt Gaetz. Rep. Doug Collins (R-GA) is also under self-quarantine after contact with a coronavirus person. He too, shook the president's hand.

"They shared all that air in the plane," noted co-host Joy Behar. "I don't know that he wants to be tested. If they find he has it, the stock market will go bananas, and that impacts his reelection campaign, which is all he's thinking about all the time. You know, because he's afraid he's going to go to jail."

"That's so dangerous that the commander-in-chief has been obviously, possibly exposed to the coronavirus and would not be tested," Sunny Hostin said. "You'd think he'd at least have access to it."

"I agree, the political implications if he ends up having coronavirus are cataclysmic," agreed McCain, before going on to discuss the political rallies and other large events that are putting more people in contact with possibly infected supporters.

"There's a lot of misinformation that we don't know. I'm not a doctor," McCain continued. "Don't take my medical advice, but I am someone who lives in logic, and I don't know why we're not down Italy if this isn't a problem. like, if you get the flu, you don't shut down an entire country."

Last week, Trump indicated he would like to close the U.S.-Mexico border to prevent infection.

Co-host Whoopi Goldberg said that her business partner was in Italy, and no one cared whether he had a fever when he came through customs.

"Part of the problem, why this is interesting politically, is it seems like the chickens have finally come home to roost with his misinformation," said McCain. "It's one thing to say windmills cause cancer. It's one thing to say there's a million people at my rally, whatever. It's entirely different from saying this potentially deadly virus that is globally hitting everywhere is no problem here. I actually think it is one of the few things that could really hit this election in an interesting way. We have an election night tonight, and how many people are going to end up going to the polls in the same way that they would if this also wasn't going on, so I think the politics of this..."