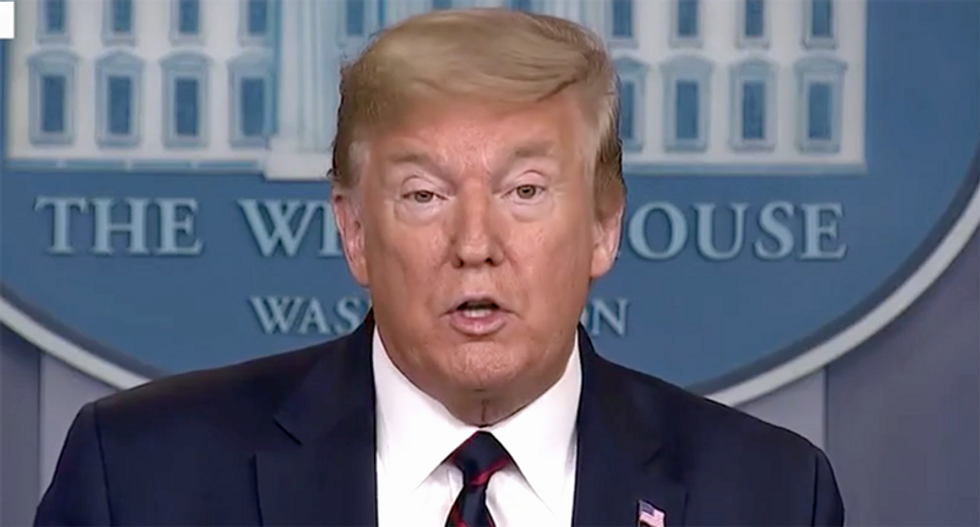 President Donald Trump spoke to Japanese Prime Minister Shinzo Abe about the global coronavirus threat where the PM brought up the drug Avigan as a possible treatment for COVID-19. The White House is now fast-tracking regulators to approve the drug, even though it hasn't been proven to work on the virus.

Politico reported Tuesday that global regulators and U.S. researchers have expressed concerns about the risks the drug has for a long time. According to past tests, the drug can cause birth defects and research on it is insufficient.

Trump has already run into trouble endorsing drugs that aren't proven to be effective against the virus. When he touted an anti-malaria drug, hydroxychloroquine, people desperately searched for it, discovering a toxic version used to clean fish tanks. When a couple used it the husband died and the woman took to the airwaves begging Americans not to listen to anything Trump says and consult doctors instead.

Politico noted that the president asked the FDA to fast-track making hydroxychloroquine, which still hasn't actually been tested as a treatment for the coronavirus.

The National Security Council has asked the government to accept a donation of Avigan from Japan so they can begin using it in emergency cases of coronavirus.

"The FDA remains actively engaged with partners across the U.S. government, academia and regulated industry to expedite the development and availability of critical medical products to prevent and treat this novel virus ," a spokesperson at Health and Human Services said in a statement.

"Health officials have repeatedly rejected Avigan in the United States, despite years of advocacy from Japan and Fujifilm," Politico reported. "South Korea officials this month also declined to use the drug in that nation's coronavirus response, warning of insufficient evidence and the risk of 'serious side effects.'"

"Avigan has not only not shown efficacy during test studies but also there is not data on clinical trials conducted on patients," said Oh Myoung-don, a South Korean infectious disease expert.