Trump energy regulators are using an obscure bureaucratic maneuver to allow pipeline companies to legally seize land and start construction while opponents to the pipelines are in legal limbo.

The Federal Energy Regulatory Commission has used this ploy, upheld in a 1969 case, to stall opposition for decades. Under Trump, the commission, whose general counsel is James Danly, the relatively inexperienced attorney Trump nominated for a commission seat, has stalled every timely request for a rehearing in the past two years. That means pipeline challengers can’t go to court until the commission decides to stop stalling them.

FERC can keep homeowners in seemingly endless administrative limbo while energy companies plow ahead seizing land and constructing the very pipeline that the homeowners seek to stop. 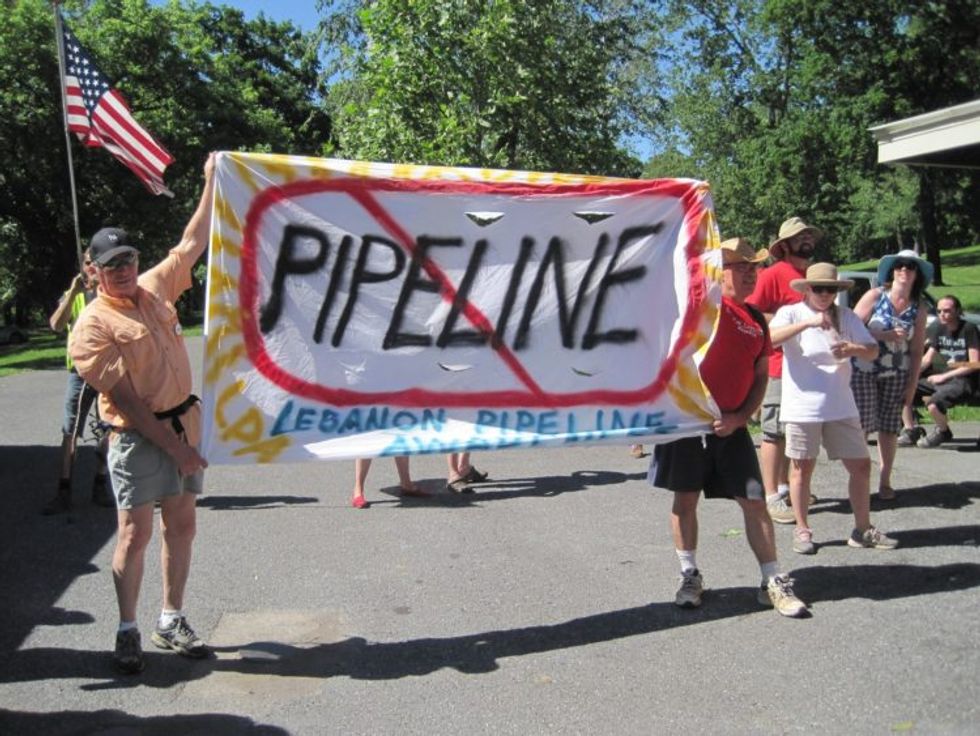 The U.S. Court of Appeals is scheduled to hear arguments about the stalling tactic, known as “tolling orders,” in oral arguments on March 31. The orders are decisions by the commission that neither grant nor deny rehearing requests, placing challengers in legal limbo, sometimes for years.

The case the D.C. Circuit is hearing involves the Atlantic Sunrise pipeline. Catholic nuns and others sued after FERC stalled rehearing the case long enough to let Transco start construction. The pipeline, which went into service in October 2018, runs from northern Pennsylvania to Alabama.

Danly and other attorneys for the commission said in court records that the Natural Gas Act doesn’t require a final decision in 30 days.

Dominion Energy, the politically powerful company whose board members have included William Barr, now Trump’s attorney general, got a nine-month reprieve from pipeline challengers with this maneuver. Dominion used this time to cut down trees and start building a compressor station in Northampton County, North Carolina where more than half the residents are African American and the median household income is nearly $15,000 below the state average.

The 600-mile Atlantic Coast Pipeline that Dominion and Duke Energy hope to build would run from West Virginia to North Carolina through two national forests and the Appalachian Trail. Court challenges and problems getting permits have halted construction for now.

Dominion told investors in November that it expected to receive a new opinion from the Fish and Wildlife Service about the pipeline’s impact on endangered species that would allow it to resume work on the pipeline.

Reid began by asking at what point "critical race theory" was invented, and he didn't know, saying sometime in the 1980s or 1990s. Reid cited the Harvard University paper in which it was first mentioned in 1981 by Professor Derrick Bell, who died in 2011.

She cited Rufo's "documentary" on critical race theory that cite professors or professorial types who he admits are academics who he claims are replacing equality with equity, which is a conservative charge Reid said she's been hearing since she was in high school. "To ending individual property rights and even to committing reverse genocide or calling for reverse genocide."

Rufo said that it wasn't true, which Reid said she would play the clip if Rufo allowed her to do it, but he wouldn't. He said that the term is counter genocide, a genocide perpetrated in retaliation to another genocide.

Rufo began to complain that Reid was citing things and not letting him answer, but she explained she wanted to go through her list of disputes.

He also quoted American author Robin DiAngelo was another person he quoted, who did her thesis on whiteness in racial dialogues. She also is an education professor, not a critical theorist, according to her website.

"There are these very pathetic and very angry graduate students who try to fight me on these highly technical haggle interpretations," said Rufo. "I don't have time for this. Like I don't give a sh*t."

Reid noted that there again explains that critical race theory isn't something being taught in kindergarten, it's a graduate-level conversation among academics.

His argument fell apart from there.

"This sounds like a rehab tour on their part to rehabilitate the image somewhat because, as we know, they're not welcomed in polite society as they once were," continued Acosta, adding that such rehabilitation is "impossible" because "They were there for the ugly end to it all. Where are they now to say that what happened on January 6 was an absolute disaster for this country? They haven't done that, and how can they possibly separate themselves from the former president until they do?"

Jim Acosta on Jared and Ivanka's efforts to distance from Trump www.youtube.com

"I resent as an intellectual and as a Black person in America that we have taken the brunt of anti-intellectualism," Dr. Dyson said. "We have borne the brunt of being disloyal to this nation. And we have stood by to see mediocre mealy-mouthed snowflake white men who are incapable of taking critique, who are willing to dole out infamous are reputations of the humanity of the other and yet they call us snowflakes? They are the biggest flakes of snow to hit the Earth! They are incapable of criticism. They are incapable of tolerating difference. They're scared of, oh, my God, critical race theory is going to kill your mother. They are not critical, they have no race and don't understand theory. Yet they are allowed to wax eloquently about the means and limits of rationality in this country and they couldn't save themselves if the world depended on it."

He went on to express how tired he was of mediocre white men like this. Those who "take to their pulpits to excoriate women and trans people and bisexuals and Black folk and every other that ain't them. It is time that we in America take back in the country for certain. and to seize the reins of authority so that rhetorics of compassion, discourses of empathy and love in the most radical sense possible would prevail. And that means we read everything."

He explained that he reads right-wing things every day, "and I ain't no right-winger." He said he wants to understand what drove the rage that led to the attack on the U.S. Capitol. "But it doesn't make me full of rage."

Reading opposing views appears to threaten Fox News or Republicans and the only reason that could be behind it is they're afraid that the opposing view might expose their own lies.