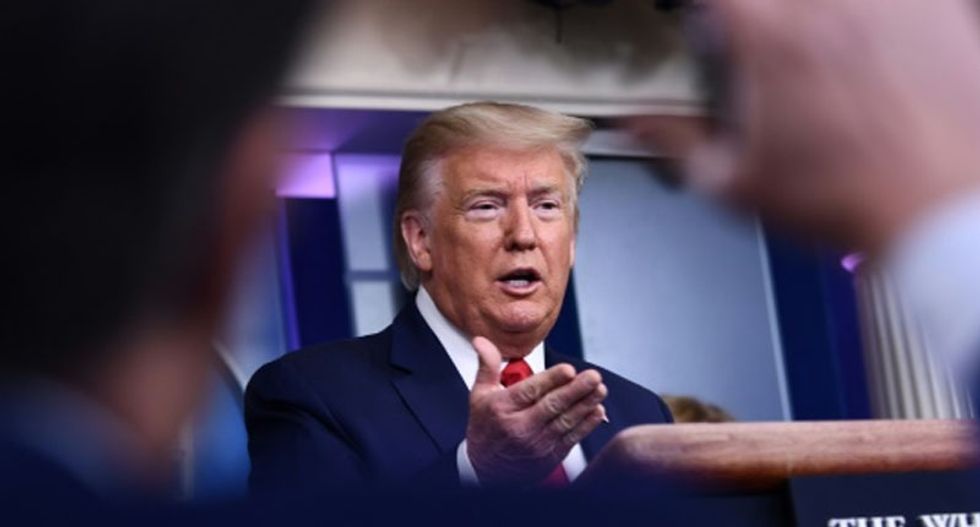 The president used an expression during a press briefing yesterday that sums up everything you need to know, I think, about his mindset amid a global pandemic.

“The war against the Chinese virus,” Donald Trump said.

He was referring to the novel coronavirus (COVID-19), which originated in China, but since December has spread around the world, bringing the international economy to a halt, panicking equity markets, and altering daily routines here and elsewhere. The president said he was invoking the Defense Production Act, a Cold War-era law, to address directly the shortage of medical equipment, such as coronavirus testing.

“Chinese virus” is a racist phrase, but Trump’s gambit doesn’t stop at rhetoric. He’s identifying a scapegoat to blame for his refusal to take the disease outbreak seriously, as well as gagging government officials for speaking publicly. Moreover, “war against the Chinese virus” sets Trump up to claim a title he has longed for: war president.

As with all things Trump, however, there’s no there there. After his invoking of the Defense Production Action, the press corps discovered the administration had no plan for ramping up production of medical equipment that first responders need badly. Meanwhile, the White House is spending all of its time lobbying Senate Republicans to pass a $1.2 trillion stimulus package to paper over Trump’s criminal negligence.

It’s by now a familiar pattern. The president stands in front of television cameras to announce he’s doing X. He thinks doing X projects an image of strength. Later on, it’s revealed doing X wasn’t the point. Saying he was doing X was the point. This pattern is the president’s fundamental weakness. It’s far from benign, however. Saying he’s doing X without instrumental follow-through has real-world outcomes that can be deadly.

His travel ban from Europe was supposed to show he was taking decisive action in response to Europeans “seeding” disease hotspots in the states. The result, however, was turning airports into gigantic vectors ideal for distributing the coronavirus. US travelers last weekend were stuck in long lines in close quarters for hours waiting to be screened by TSA officers underprepared and overwhelmed by the influx of flyers. All these people went home to hug loved ones, spreading COVID-19 far and wide.

Casting himself as a war president tells us Trump’s focus is on his television image more than it is on the nation’s health. His television image, of course, is wrapped up in the idea of a strongman getting tough on foreigners whose breath and blood are ruining the country. When the press corps asks him to evaluate his response to the viral outbreak, the president points, like clockwork, to his decision to suspend travel from China, as if that proves his intent to prosecute “the war against the Chinese virus.”

Casting himself as a war president explains something else: His intention to confuse public understanding of the facts behind the outbreak, especially that he knew of its dangers but prevented administration officials from speaking the truth for fear of it being used against him. This is the same president impeached and tried for putting his interests above the nation’s. The difference now is that millions of lives are at stake.

He isn’t alone. NPR’s Tim Mak revealed a secret recording made three weeks ago in which GOP Senator Richard Burr warned a group of rich constituents that the coronavirus was about to change the face of the earth. Burr is chairman of the Senate Intelligence Committee. He’s getting the same information the president is getting. Burr understood what was coming, but chose not to arouse the president’s fury.

As a war president, Trump will blame China while fighting “foreign viruses” in other ways having nothing to do with public health. Thanks to a GOP Senate, he’s free to use money any way he wants. He broke federal law when he held up military aid to Ukraine, but his acquittal in the Senate means no one will hold him accountable for violating the statute again. So there’s virtually nothing standing in the way of his claiming some of the $1.2 trillion in economic stimulus to finish a border wall.

The president’s supporters are likely to see his pivot to the border wall as just one more way he turned the tables on enemies pining for his end. Texas, Tennessee, Oklahoma, Missouri, Mississippi, Idaho and Wyoming (all friendly to the president) have taken few steps, or none at all, to slow the spread of the coronavirus. Their governors seem to insist that life go on as normal (i.e., public schools remain open) as if that were some kind of resistance to the “Deep State” trying to bring down Trump.

They’ll cheer a war president—even if it kills them.