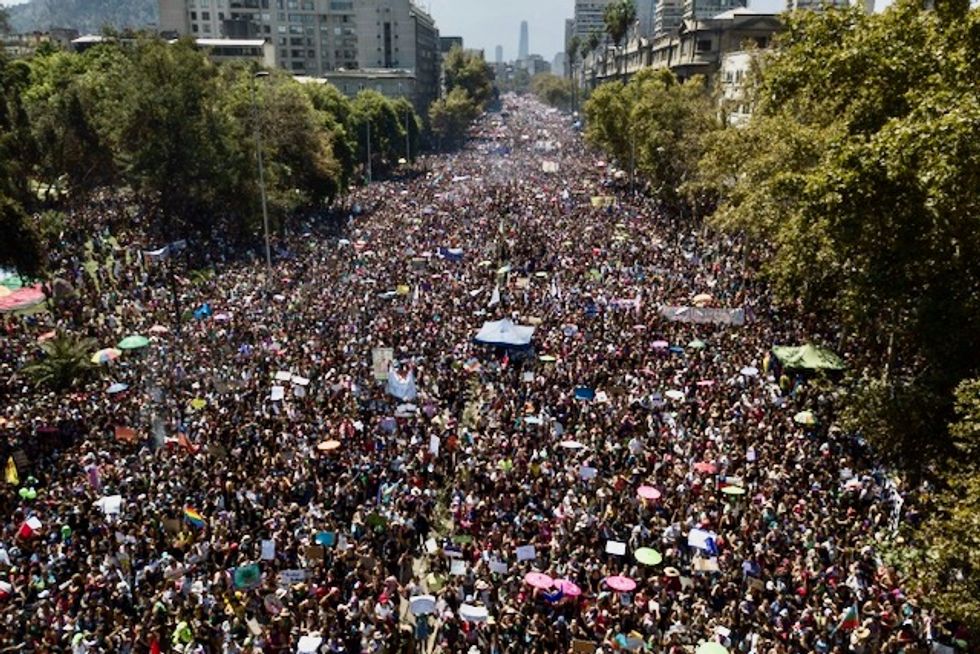 Hundreds of thousands took to the streets across the globe to mark International Women's Day on Sunday, despite many events in Asia being cancelled because of the coronavirus outbreak and attacks on women at some events in Europe and Asia.

Women were attacked at events in Pakistan and Kyrgyzstan, police fired tear gas at women marching in Turkey and some politicians condemned what they said was police violence at a women's rally in Paris.

Some women who marched in ultra-conservative Pakistan came under attack with stones and sticks, reflecting the movement's challenge in a society where females are still put to death under ancient "honor" codes.

In Kyrgyzstan, masked men attacked one rally in the capital Bishkek, tearing up placards carried by the participants, as police arrested dozens of demonstrators.

A police spokesman said they were detained for their own safety.

AFP / Rizwan TABASSUM Women marched in a number of cities in Pakistan, escorted here in Karachi by armed policewomen

In Turkey, Istanbul police fired tear gas to stop women marching on the city's central avenue after authorities banned the march for the second year running.

But there were huge rallies in Chile, where authorities said 150,000 protesters gathered in Santiago.

Clashes broke out briefly as police used tear gas and water cannon to prevent some protesters heading towards the presidential palace.

Many of the women wore green headscarves, symbolizing the fight for pro-choice abortion rights, or purple scarves -- an anti-femicide rallying symbol.

Mexico, which has long battled deep-rooted violence against women, also saw record crowds attend the annual event marching through the capital Mexico City after a string of recent murders.

"I march for so many missing girls and to raise my voice," Blanca Martinez, a 47-year-old whose daughter-in-law was murdered, told AFP as protesters packed the streets.

In France, topless Femen activists, wearing protective glasses and masks, gathered at Place de la Concorde in Paris to denounce "the patriarchal pandemic," despite the best efforts of police to control them.

"Who's doing the washing up?" they chanted. "We are making a revolution."

Rights groups and politicians denounced what they said was police violence at a women's march in Paris the night before, after scuffles broke out and police arrested nine people.

Paris mayor Anne Hidalgo said she was shocked by the "incomprehensible" violence and expressed her solidarity with the demonstrators.

In China, the epicentre of the coronavirus epidemic, state broadcaster CCTV highlighted the work of female medical workers on the frontlines in the fight against the virus.

Despite growing fears over the worsening epidemic, marches went ahead in Thailand, Indonesia and the Philippines.

A women's marathon planned in India was postponed over virus concerns.

In South Korea, where more than 7,000 virus infections make it the hardest-hit country outside China, several events were cancelled.

"Although we can't be physically together, our minds for realising gender equality are stronger than ever," the country's gender equality minister Lee Jung-Ok said in a video message.

- 'Violence and poverty getting worse' -

In Bangkok, protesters called for improved labour protections amid the epidemic that has infected dozens in Thailand, and greater rights under a military-aligned government.

Hundreds of women and men rallied in the Philippine capital Manila, burning a giant effigy of President Rodrigo Duterte -- whom they accuse of misogyny -- to mark the day.

"The violence and poverty among women are getting worse," Joms Salvador of women's group Gabriela told AFP.

Women also turned out in force in Iraq and Lebanon.

Thousands marched in the Spanish capital Madrid, and thousands more in the Ukrainian capital Kiev.

In Peru, women demonstrated in the capital Lima calling for legal abortion, better working conditions and an end to violence against women.

In Sudan, women demonstrated outside the justice ministry in the capital Khartoum on Sunday, calling for an end to discriminatory laws.

Women in Brazil marched against the policies of the country's far-right president, Jair Bolsonaro.

"The government's policies have consisted of taking away the rights of women workers," 35-year-old Marcela Azevedo, with the group Women in Combat, told AFP.