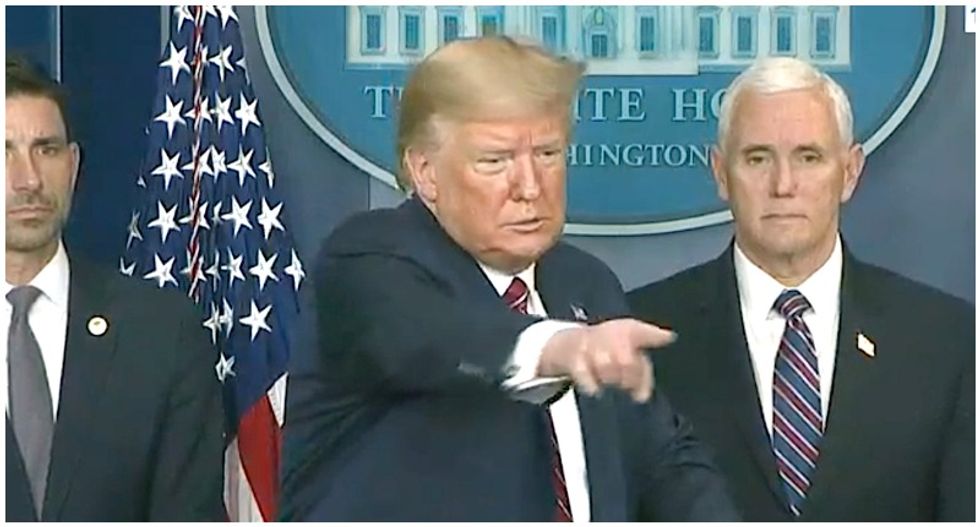 During a press briefing today to address the latest developments surrounding the growing coronavirus outbreak, President Trump lashed out at NBC’s Peter Alexander, accusing him of being a "terrible reporter."

"I say that you’re a terrible reporter… It is a bad signal that you are putting out to the American people,” Trump told Alexander after he asked what message Trump would send to a scared public. “The American people are looking for hope and the same with NBC and Comcast who you do work for — let me say something -- that’s really bad reporting. You want to get back to reporting instead of sensationalism.”

Later during the same conference, CNN's Kaitlan Collins challenged Trump over his exchange with Alexander, asking if it was appropriate to attack journalist amidst a global health crisis.

"You see yourself as a wartime president right now leading this country through this pandemic we're experiencing," Collins said, addressing Trump. "Do you really think going off on Peter, going off on a network is appropriate when the country's going through something like this?"

"But he's asking for your message to the country," Collins interjected.

"Oh, I think it's a good message because the country has to understand that there is indeed, whether we like it or not -- and some of the people in this room won't like it -- there's a lot of really great news and great journalism, and there's a lot of fake news out there."

—@kaitlancollins asks Trump if attacking @PeterAlexander and NBC is appropriate given the country is going through… https://t.co/8xQZP8cmfL
— Oliver Darcy (@Oliver Darcy)1584722687.0