'We cannot test. We cannot test': As coronavirus cases in US spike 40% in one day, medical workers plea for key supplies 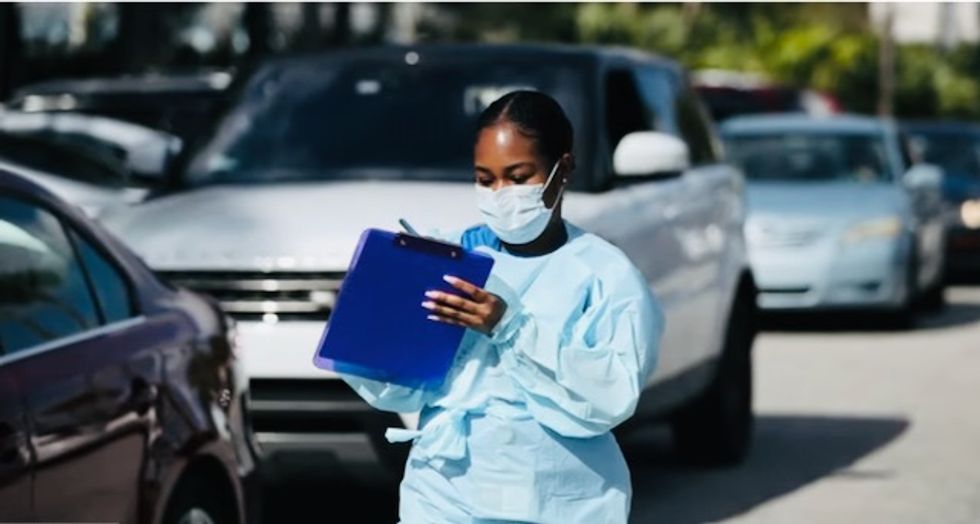 "Testing is central because that leads to early detection, it minimizes further spread, and it quickly treats those found with the virus."

As it was reported Thursday that the number of confirmed coronavirus cases in the United States rose by over 40% in just 24 hours, frontline medical workers across the country expressed alarm about "severe shortages" of testing and protection equipment.

"Due to a national shortage of COVID-19 laboratory testing materials, the state is forced to make adjustments to its testing criteria to focus on the highest priority specimens, including hospitalized patients."

—Minnesota Department of Health"This is a huge problem," Scott Becker, CEO of the Association of Public Health Laboratories, told CNN, which reported on medical supply shortages across the U.S. late Wednesday. "I'm really concerned that we are not going to have the capabilities to test those who really need and should get a test."

Despite the federal guarantee of testing and President Donald Trump boasting that the government has done "a fantastic job" managing the outbreak, "medical officials at several state health departments, hospitals, and labs have told CNN they need more testing swabs, reagents, pipettes, and other material needed to conduct the COVID-19 tests."

For example, the Ohio Department of Health told CNN that it is focusing on "testing our most vulnerable patients" because of a "global shortage of supplies."

The Minnesota Department of Health, meanwhile, announced Tuesday that "due to a national shortage of COVID-19 laboratory testing materials, the state is forced to make adjustments to its testing criteria to focus on the highest priority specimens, including hospitalized patients."

The Washington Post reported Wednesday that Utah health officials are trying to reserve tests for "the most at-risk populations" and are instructing patients to only seek testing if they display obvious symptoms. "Unfortunately, we are faced with infrastructure and logistical challenges that prevent us from being able to test everybody," Angela Dunn, the state epidemiologist, said Tuesday. "There's not a win in that situation. It's just what we have to do."

While patients in various states told CNN they have been informed that "we aren't priority to take the test" and are "so angry and outraged at the way this is being handled," test suppliers in the United States and Europe explained that "it is unprecedented demand" and they cannot keep up.

As the New York Times explained Wednesday, the limited supplies are affecting tests and treatment for not only COVID-19 but other healthcare services:

At the UCSF Health—a San Francisco hospital system at the heart of one of the nation's coronavirus outbreaks—officials said they would have to stop testing patients in about five days because they will run out of nasopharyngeal swabs, which are inserted into patients' nasal passages to get samples for testing. Other hospitals elsewhere in the country were ending their practice of using a second swab to test for the flu in an effort to preserve their supply.

The main manufacturer of the swabs, Copan, is an Italian company whose manufacturing plant is in Northern Italy, a region that has itself been hard hit by the coronavirus outbreak. It says it has ramped up manufacturing to deal with the extraordinary demand for an otherwise unassuming product to which many doctors gave little thought, until now.

"We weren't really thinking about, 'Wow, what's our swab supply?' because we haven't really faced anything that depleted our swabs before," said Dr. Josh Adler, the chief clinical officer of UCSF Health. Making matters more difficult, the swabs must have just the right ingredients—the shafts cannot be wood, for example—or the virus might not be properly detected. "You can't go to your local store and get Q-tips," he said.

On Wednesday, UCSF Health said it had secured another two-day supply of swabs.

Other providers are also struggling to access supplies. Dr. Ulrike Sujansky of San Mateo, California told the Times that she has only been able to test a few patients in her hard hit area because of supply problems, such as swab kits have arrived late or haven't been the right type. "We cannot test," she said. And repeated: "We cannot test."

Sujansky said that she also lacks standard protective gear, like face masks, which healthcare providers use while treating patients to reduce their chances of getting sick themselves—despite trying to purchase them and appealing to local and state authorities and hospitals.

"I'm not given any tools to deal with this complete crisis," Sujansky said.

And Sujansky is far from alone. The Post detailed mask shortages—and the federal response—in a Wednesday night report:

This week, the Centers for Disease Control and Prevention attempted to address the mask shortage by recommending the use of bandannas, if necessary. "In settings where face masks are not available, [healthcare providers] might use homemade masks (e.g., bandana, scarf) for care of patients with COVID-19 as a last resort," the CDC said, referring to the disease caused by the virus. "Caution should be exercised when considering this option."

At major hospitals in Seattle and Washington, D.C., mask shortages had already become so acute that doctors and patients were being asked to reuse the masks, not dispose of them as previous, traditional CDC protocol requires, even after contact with infected patients.

Nicole Lurie, who served as assistant secretary for preparedness and response at the Department of Health and Human Services (HHS) during the Obama administration, called the CDC's bandanna suggestion "a wake-up call."

As for lack of adequate testing, that is a major issue because, as the Times newsletter "The Interpreter" explained Thursday, China and South Korea have shown that "testing early, often, and widely makes all the difference."

The newsletter report on lessons from the global fight to contain the outbreak—which began in Wuhan, China late last year and has since infected over 200,000 people worldwide—pointed out that "aggressive testing" is essential because "it gets countries better data on not just the overall spread of the virus but the particulars of how and where it is spreading."

As South Korean Foreign Minister Kang Kyung-wha told the BBC, "Testing is central because that leads to early detection, it minimizes further spread, and it quickly treats those found with the virus." He called South Korea's widespread testing efforts "the key behind our very low fatality rate."

According to a Times database of U.S. COVID-19 cases, the virus has infected at least 8,317 people across every state, Washington, D.C., and three U.S. territories, and led to at least 147 deaths. The pandemic has also shuttered schools and businesses across the country and spurred concerns of a coming recession.

Trump on Wednesday signed the $100 billion Families First Coronavirus Response Act, which ensures free coronavirus testing for all Americans and other assistance like paid sick leave, but only for certain workers. Congress is now working on more comprehensive economic relief package that could top $1 trillion.