'Wearing a MAGA hat with destruction behind him is spot on': Trump ripped for 'advertising reelection' while touring tornado-ravaged Tennessee 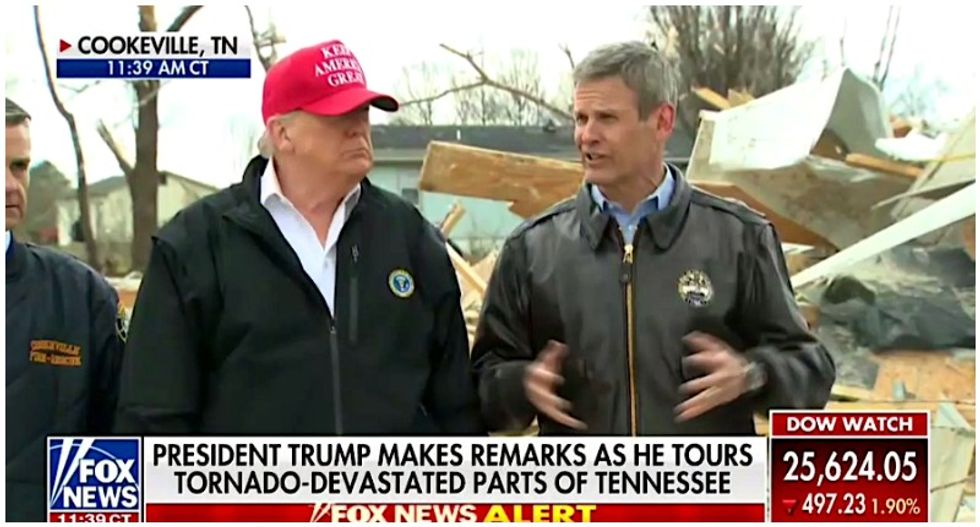 In a post to his Twitter account the same day, BuzzFeed’s David Mack shared an image of Trump standing alongside Tennessee governor Bill Lee, wearing a red re-election hat. In 2016, the hats featured the slogan, “Make America Great Again” (MAGA), they now also feature the slogan “Keep America Great” (KAG), which was the version Trump was wearing in Tennessee.

In a post to his Twitter account the same day, BuzzFeed's David Mack shared an image of Trump standing alongside Tennessee governor Bill Lee, wearing his patented red MAGA hat.

"Trump is wearing a campaign hat to advertise his re-election as he tours a disaster zone where 25 Americans died," Mack wrote.

The image came across as callous to many of the President's critics on Twitter, who didn't hold back in saying so.

@davidmackau Trump wearing a Keep America Great hat with destruction behind him is spot on.
— James (@James) 1583517132.0

Florida is officially a laboratory for fascism in America

Chauncey Devega, Salon
Ron DeSantis is not a "mini-Trump" or some other diminutive. He is much more dangerous. Donald Trump has no "ideology" beyond megalomania and a deep desire to be an American god king. By comparison, DeSantis is far more intelligent and devious; he is an ideological fascist and racial authoritarian.

In a recent essay at Raw Story, Thom Hartmann summarized the danger to American democracy and society embodied by DeSantis:

Historians and political observers have been predicting that America would get our very own Mussolini ever since the days of Barry Goldwater. And there's been no shortage of candidates: bribe-taking Nixon; Central American fascist-loving Reagan; Gitmo torturing and war-lying Bush; and, of course, Trump.
But with Ron DeSantis, we may finally be facing an all-American politician who has Mussolini's guile, ruthlessness, and willingness to see people die to advance his political career, all while being smart and educated enough to avoid the easily satirized buffoonishness of Trump.

DeSantis and other Republican fascists have proclaimed Florida to be a bastion of "freedom" and "liberty." In reality, Florida is now a laboratory for fascism. As part of his authoritarian project, DeSantis is enforcing thought crime laws that forbid the teaching of AP African-American studies in high school and other courses and programs across Florida's school system (including at the college and university level) that examine questions of power, race and systemic inequality. DeSantis and his agents recently declared that the AP African-American studies course was inappropriate and will not be taught in Florida's schools because it has "no educational value" and is "indoctrinating" (white) young people. DeSantis and his regime's thought crime attacks on African-American studies are Orwell's "1984" meets "Birth of a Nation."