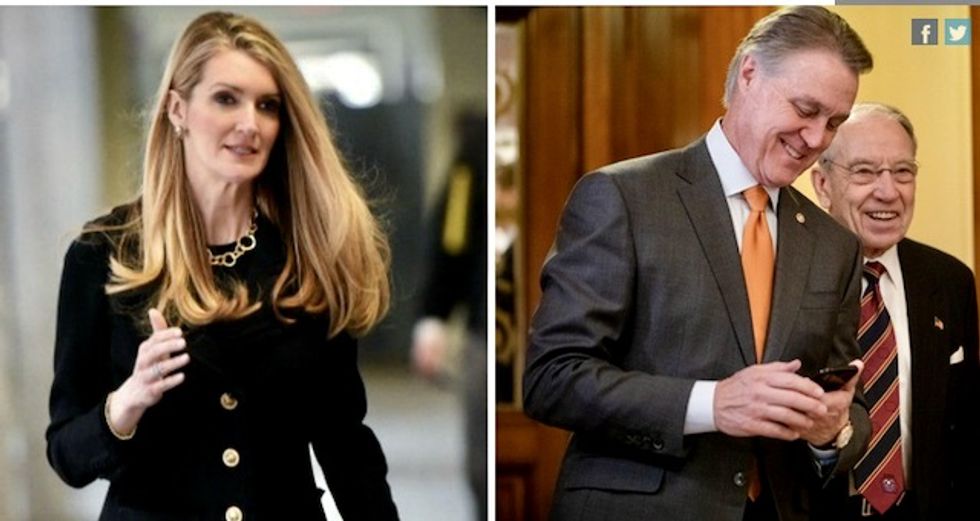 "It's time to revive the economy, says woman who did insider trading to avoid taking the loss when it tanked."

Three weeks after government watchdogs demanded the resignation of U.S. Sens. Kelly Loeffler and Richard Burr following reports that both responded to briefings about the burgeoning coronavirus pandemic in late January by selling millions of dollars in stocks, critics slammed President Donald Trump's appointment of Loeffler to the White House's committee on reopening the economy.

Loeffler's fellow Republican senator from Georgia, David Perdue, was also named as a member of the committee weeks after reports revealed he bought stock in a personal protective equipment (PPE) manufacturer after learning about the public health crisis which would soon cause nationwide shortages of the equipment as healthcare workers treated coronavirus patients. Perdue sold stocks after briefings in January and early February, as well.

Journalist Ryan Grim called the appointments "an odd choice of senators for this role."

Following reports that Loeffler was one of dozens of members of Congress to be tapped for a committee seat, the first-term senator—a former financial services CEO who had no political experience before being appointed to the Senate by Georgia's Republican governor, Brian Kemp—tweeted, "It's clear we must start working to revive our economy and get the American people back to work safely."

Perdue wrote that he was "humbled" to be appointed to the task force.

Critics on social media denounced the appointment of two senators who, while their party publicly downplayed the risk of the coronavirus outbreak spreading across the U.S. early this year, prioritized their personal finances based on private briefings instead of warning their constituents.

"It's time to revive the economy, says woman who did insider trading to avoid taking the loss when it tanked," wrote progressive activist Jordan Uhl.

It's time to revive the economy, says woman who did insider trading to avoid taking the loss when it tanked. https://t.co/sfjEzIwnmu
— jordan (@jordan) 1587066564.0

Loeffler, who owns a stake in the Atlanta Dream WNBA team, has likely found "a new way to profit off coronavirus deaths," tweeted comedian Mike Drucker, as Loeffler and other Republicans push to bring social distancing practices to a halt and reopen businesses and schools across the country, against the advice of public health experts and economists.

Ed Tarver, a Democrat running to unseat Loeffler in November, compared her appointment to "putting a shark on the task force to reopen the beaches on Amity Island" in the movie Jaws.

Democrat Jon Ossoff, who is challenging Perdue, called the new White House task force "The Senate Select Committee on Stock Tips" and suggested Perdue's appointment "could allow the senator to obtain insider information that he passes along to financial advisers."