The past three decades saw a dramatic improvement in our understanding of what brings about Alzheimer’s disease. Two proteins are thought to be responsible: amyloid and tau. The most widely accepted theory is that a critical level of amyloid in the brain triggers the build-up of the more toxic tau protein. This has led to several studies testing drugs and vaccines that remove amyloid and tau to see if they can improve or even prevent dementia. Results have been disappointing.

All studies in dementia patients have failed to show improvements, even if amyloid itself was affected. In a prominent case, a vaccine given to patients was shown to have cleared the brain of amyloid of people who nonetheless died of profound dementia.

Over the same period, studies in people destined to develop the condition because of a genetic mutation reported that the changes leading to dementia begin up to 25 years before any symptoms. One logical interpretation is that attempts to find a cure for dementia may have failed because the patients in drug trials were treated too late in the disease process.

This new thinking led to new treatments being tested as early as possible, for example, at the stage of having widespread amyloid in the brain but no other signs of dementia – so-called preclinical dementia. These studies use methods such as spinal tap or positron emission tomography (a type of brain scan) to confirm that a person has a critical level of amyloid. But there is evidence that already at this very early stage, potentially irreversible damage, such as loss of brain tissue, is occurring.

Researchers have gone further and shown that people who are yet to reach the critical level of amyloid but are accumulating the protein at an accelerated rate, show early signs of dementia-related brain changes, such as changes to mental ability.

Our team wanted to know if such a group of “fast protein accumulators” can be identified among healthy ageing adults. The implication is that these people would be the ones who would benefit most from a drug that interferes with the dementia process, before any damage has set in.

To do this, we accessed two US studies that collected repeated spinal tap and amyloid brain scans for decades. We were able to demonstrate that some people are on a particularly aggressive course of build-up of either amyloid or tau, or both. Importantly, there seemed to be a “switch on” moment in the participants’ late 50s when the accumulation suddenly ramped up.

Having a genetic variant that is well known to predispose people to dementia (the e4 version of the APOE gene) made it more likely that the person would be on the aggressive protein-accumulation path and have their “switch on” moment five years earlier, compared with those without an APOE e4 gene version.

We found that the “switch on” moment happens at roughly the same age for both the amyloid and tau proteins. This contradicts the theory that “a brain full of amyloid” is needed to start the cascade leading to dementia. Instead, the processes that lead to dementia run concurrently.

Also, as our studies ran for decades, a number of people eventually developed memory problems. We found that a person that was accumulating both tau and amyloid fast was most likely to be diagnosed with dementia in the decades to follow. 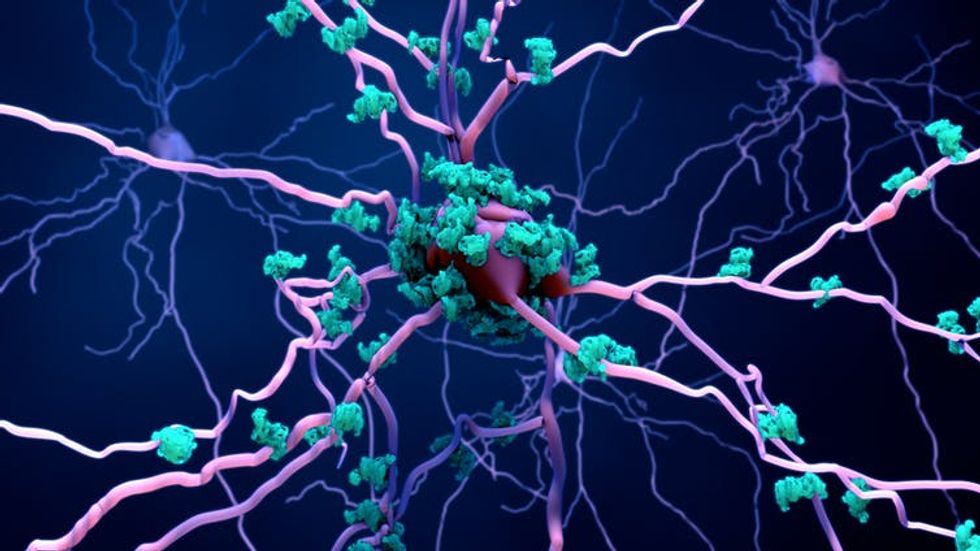 Proteins accumulating on a brain cell.

Our paper shows that we now have the technology to identify people who are on a fast track to developing dementia. Still, it would not be practical to screen for these people by doing repeated spinal taps. Instead, we need to find cheap and easy-to-tolerate methods to predict who belongs to this fast track group of people.

We found that tests usually deployed in dementia studies (brain scans, clinic memory tests) were not useful in this respect. It is possible that so early on we need a whole different set of tests that show very minor changes in the way our brains function day to day. Examples of these could be wearable devices that show subtle changes in gait or disturbances in the quality of sleep. Apps that track how well we go about our use of digital technology over time (for example, how fast we are in finding the right word when texting) may also point to people whose brains are under strain.

A number of such digital technologies are being developed and, hopefully, in the not-too-distant future, we will have access to such solutions in both routine clinical practice as well as studies testing new treatments that delay or even prevent dementia.