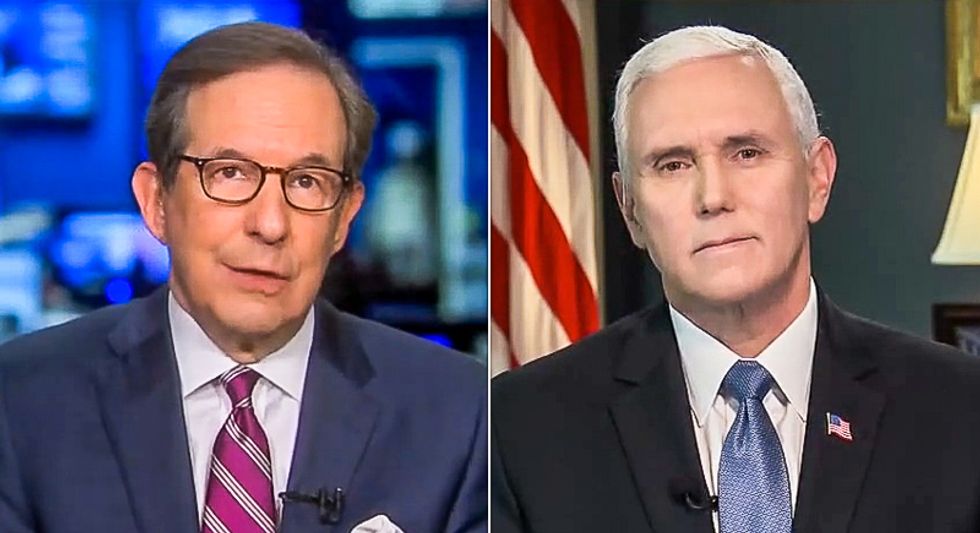 Vice President Mike Pence on Sunday defended President Donald Trump for inciting protests in the middle of a pandemic.

During an interview on Fox New Sunday, host Chris Wallace noted that demonstrators calling for the economy to reopen were seen violating social distancing guidelines.

Pence, however, praised the president instead of answering the question.

"We continue to see encouraging results, declining cases, declining hospitalizations because of what the American people have done, because of the president's leadership," the vice president said. "We are slowing the spread, we are hastening the day when we can put the coronavirus in the past and reopen the American economy."

Pence continued for over a minute before Wallace interrupted.

"But Mr. Vice President," Wallace said. "In a number of these cases, these protesters -- who are not social distancing -- are saying they don't want to wait. In many cases, they're protesting your own guidelines to stop the spread."

The Fox News host pointed out that Gov. Jay Inslee (D-WA) had accused Trump of "fomenting domestic rebellion" after the president tweeted that states should "liberate" workers.

"Liberate Minnesota, liberate Michigan and liberate Virginia," Wallace said, quoting the president's tweets. "So what does the president mean because you've got guidelines that are calling for social distancing and staying at home?"

"Even your guidelines to reopen the country are very phased and gradual," the Fox News host added. "What does the president mean when he says liberate these states?"

"The American people know that no one in this country wants to reopen this country more than President Donald Trump," Pence insisted. "And on Thursday that president asked us to lay out guidelines for how the states can responsibly do that."

"And in the president's tweets and public statements, I can assure you he's going to continue to encourage governors to find ways to safely and responsibly let America go back to work," the vice president concluded.