Climate strikers blast EPA suspension of pollution laws: 'How are we supposed to protect our lungs?' 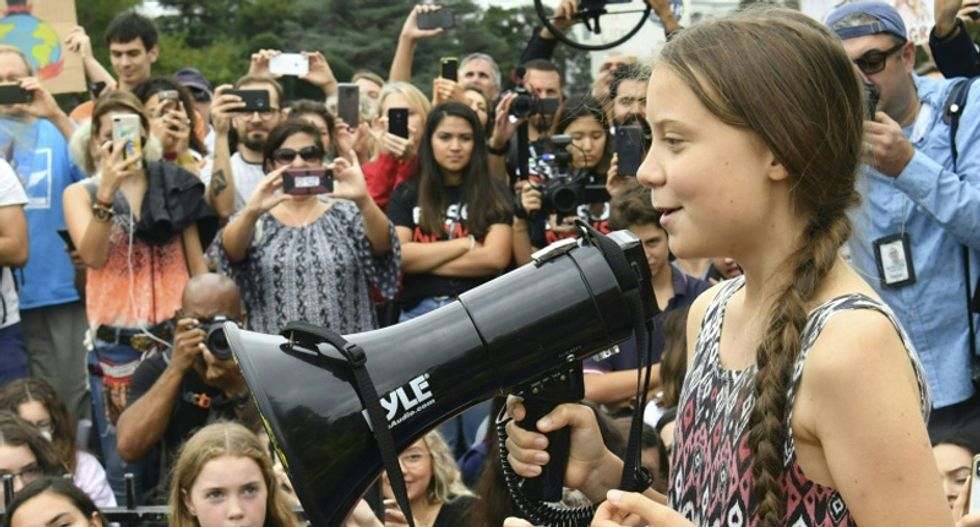 As our nation passed the grim benchmark last Thursday with the world's most confirmed cases of COVID-19, the Environmental Protection Agency quietly announced its new policy to relax oversight for water or air violations at power plants and other industrial operations.

Global climate strikers, led by Swedish activist Greta Thunberg, didn't let it slide into the oblivion of the news cycle.

"The EPA uses this global pandemic to create loopholes for destroying the environment," Thunberg posted on Twitter. "This is a schoolbook example for what we need to start looking out for."

Only days after the agency proposed new rules to restrict scientific research in public health decisions, the EPA's "temporary enforcement discretion policy" effectively unleashed polluters from any compliance with current regulations, including the emission of particulates that could impact the most vulnerable in the coronavirus crisis.

In general, the EPA does not expect to seek penalties for violations of routine compliance monitoring, integrity testing, sampling, laboratory analysis, training, and reporting or certification obligations in situations where the EPA agrees that COVID-19 was the cause of the noncompliance and the entity provides supporting documentation to the EPA upon request.

"How are we supposed to protect our lungs from Covid-19 if @EPA suspends enviro protection laws?" asked the Student Climate Strikers in Iowa City.

Here in Iowa City, climate strikers, including my son Massimo, had recently posted a list of toxins released by the University of Iowa's coal-fired power plant — including particulate matter, nitrogen oxides, sulfur dioxide, lead, arsenic and other hazardous pollutants — that could lead to "damaged lung tissue, exacerbate asthma, and make people more susceptible to chronic respiratory diseases like pneumonia and influenza," and chronic bronchitis, according to research by the Union for Concerned Scientists.

"All things being equal," Dr. Meredith McCormack, a spokeswoman for the American Lung Association and associate professor of pulmonary and critical care at Johns Hopkins University, told the New York Times on Friday, "a person exposed to air pollution would likely have a worse outcome if they were exposed to coronavirus."

While the global climate strike's "Fridays for Future" movement may have gone digital now, in an act of solidarity to slow the spread of coronavirus, its call to "treat the crisis as a crisis," in the words of Thunberg, underscores the very missteps that have allowed the U.S. to become the epicenter of the coronavirus pandemic.

Over the past year, millions of youth have been asking adults to be the "adults in the room."

Week after week, study after study, strike after strike, climate strikers been trying to get adults to recognize basic science, get beyond stages of denial and delay, and address the unfolding climate emergency — before it turns into a scenario of "untold suffering," as declared by thousands of scientists last fall.

That untold suffering is now, albeit with a different crisis.

But far from being indifferent or cavalier to the COVID-19 crisis, climate strikers have been bolstered by their work on climate issues to move beyond the paralysis of what psychologists call "anticipatory grieving" to lead weekly online discussions with climate and global health experts, and engage in mutual aid actions.

The very questions raised by teen strikers over the past year should now resonate as harbingers of our generation's colossal disregard for their well-being and our planet's future.

For starters, how many dire warnings does it take for adults to act — be it an extraordinary letter from 20,000 scientists that "soon it will be too late to shift course away from our failing trajectory, and time is running out" to avert a climate catastrophe and mass extinction, or a "cascade" of early intelligence agency reports in January to White House officials on the threat of a global outbreak of coronavirus?

Why do adults say there is no money or no way to heed scientific calls for a rapid transformation toward a fossil fuel-free electrical grid and transportation system, in order to avoid "deadly and catastrophic heat waves, storms and pollution," when Congress and the White House can quickly agree on a $2 trillion economic stabilization package that effectively bails out Wall Street?

And why isn't a policy of equity at the the heart of a relief package, when the most vulnerable in both crises — whether it is the essential workers on the front lines of health care, the food industry and the agricultural fields — are the very individuals, groups and nations who have the smallest carbon footprint on the planet?

As we deal with the urgent reality of staving off the spread of the coronavirus and dealing with the need for medical equipment, perhaps it's time for adults to start listening to the warning of their climate-concerned kids, instead of the other way around. Our future depends on it.