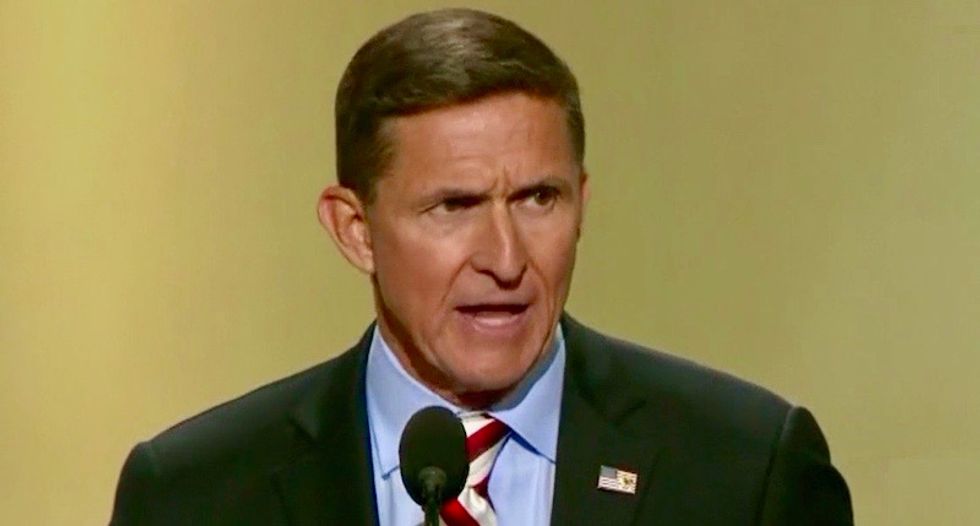 The right-wing news has come up with "emails" that they say reveals a perjury trap was devised for Lt. Gen. Michael Flynn.

In the early days of President Donald Trump's transition, Flynn worked to get a secret back channel to Russia. It became part of the investigation by special counsel Robert Mueller. When Flynn was questioned about it, he lied to the FBI, which is a crime.

According to the emails, the FBI discussed that their "goal" was "to get him to lie, so we can prosecute him or get him fired." They said that their goal was to get him to admit he violated the Logan Act, which criminalizes negotiations with foreign governments by anyone unauthorized. Trump staff were reaching out to Russia prior to being inaugurated. Flynn also revealed that it wasn't just him, but a "very senior member” of the Trump team also likely violated the Logan Act, too.

Rep. Devin Nunes (R-CA) alleged that it was clear Flynn was set up by "dirty cops."

Responding to the news about Flynn on Twitter, former federal prosecutor Elizabeth de la Vega noted that it doesn't matter if the FBI wanted to catch Flynn in a lie or not, because Flynn lied.

"Look, Dev, when Flynn was interviewed he had a choice: He could answer questions honestly or he could lie. He chose to lie. No FBI agents made Flynn lie. He did it to himself," she tweeted.

As former special counsel for the Department of Defense, Ryan Goodman, explained on Twitter, the documents actually show that they were being cautious to ensure no "games" were being played.

Former federal prosecutor Renato Mariotti agreed, saying that it isn't unusual for FBI agents to treat subjects like this. In fact, it's done to thousands of people.

This isn’t unusual at all. Michael Flynn was treated like thousands of other subjects who were interviewed by FBI… https://t.co/hPISxJsaG2
— Renato Mariotti (@Renato Mariotti)1588207951.0