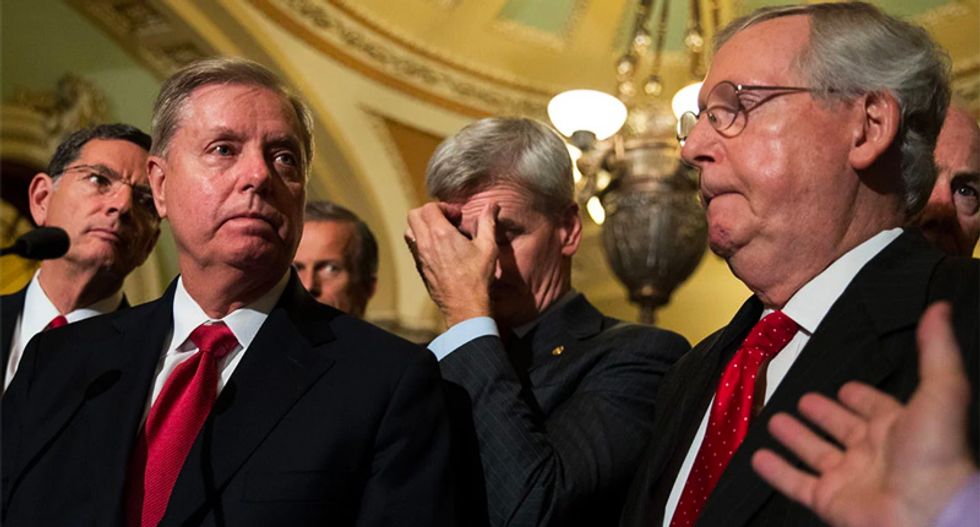 Republican lawmakers are expressing dismay at their inability to get back to work in Washington, D.C. due to the coronavirus pandemic shut down because it is holding up their attempts to pack the courts with Donald Trump appointees before the November elections.

According to a report from Politico, "The Senate’s streak of judicial confirmations is on hiatus as senators confront the coronavirus outbreak, leaving more than three dozen nominees in limbo."

With Senate Republicans promising to dive right back into confirming judges -- which is the primary focus of Senate Majority Leader Mitch McConnell (R-KY) -- they admit that the shutdown is taking away valuable time as the president faces a tough re-election campaign.

“If we’re not there, it’s hard to push them through,” lamented Senate Majority Whip John Thune (R-SD). “There have been several that have been nominated now for the circuits that have to have confirmation hearings, and that means we’ve got to be in session in order to be able to move them. It’s definitely affected the schedule that way.”

According to Sen. Mike Lee( R-UT) time is tight.

“We can recover from that fairly quickly if we go back to our regular schedule. I don’t think it will end up making a difference. If on the other hand, if this continues — meaning if we don’t find some way some time soon to start having hearings and markups again — yeah that could complicate things,” he told Politico's Marianne Levine.

The report notes that Senate Judiciary Committee chair Lindsey Graham (R-SC) has been unable to hold any hearings since March 4 and that a "total of 38 lifetime appointments to the judiciary are currently pending before the Senate," with 37 being district court nominees.

For their part, Democrats hope to slow down McConnell's primary agenda, with Sen. Mazie Hirono (D-HI) warning, "It’s just a pause. They have every intention to continue to pack the courts.”

Added Brian Fallon, executive director of liberal advocacy group Demand Justice, "I don’t think [McConnell will] be shamed out of plowing forward on judicial nominees simply because of the looming election, let alone the global pandemic. All the signals are that they’re going to resume consideration on the other side of the break notwithstanding that the real urgency after the recess is a relief package.”

Politico's Levine added that Senate Republicans hope to resume hearing and floor votes sometime in May.