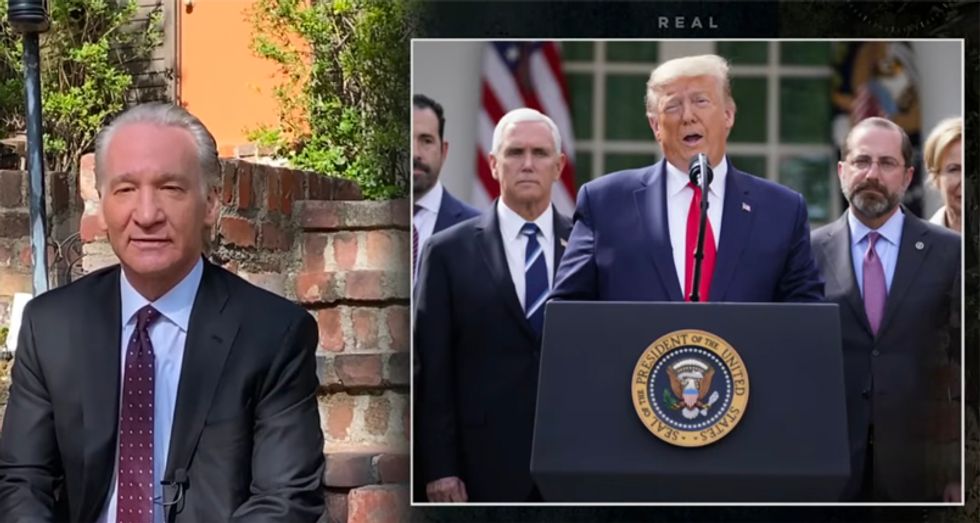 HBO's Bill Maher returned on Friday night via YouTube to blast Donald Trump's response to the coronavirus pandemic and took on fans of the president who are rallying around him, calling their response "irrational."

Speaking from what appeared to be his backyard, the "Real Time" host noted that Americans tend to rally around their leaders in times of crisis but that this president is not deserving of support.

"Was the current crisis preventable? " he asked. "Not all of it, of course. But we could have done what South Korea did, their nightmare started the day our's did. But while Trump shut up experts, happy-talked and lied his ass off, South Korea put a strong testing program into place, tracing people, and today they have twenty-0ne times the cases and thirty times fewer deaths."

"If this is a war, Trump lost it in January," he continued. "He's not FDR or JFK, he's LOL. So it's more than a little disturbing that he is getting a bump in the polls on this. A bump, that tells us we are once again entering into rally around the leader time. Around the guy who made it worse. I mean, come on, toilet paper is now more valuable than the dollar."

Internet access remained severely restricted in Iran ahead of counter rallies on Friday, after a week of protests over the death in police custody of Kurdish woman Mahsa Amini that have left at least 17 dead.

Amini, 22, died after her arrest by the Islamic republic's feared morality police for allegedly wearing a hijab headscarf in an "improper" way, and news of her death sparked widespread outrage.

Trump lashes out at 'lonely and pathetic' critic in late-night attack on CNN: 'I was probably the only one watching'

Former President Donald Trump lashed out at one of his biographers in a late-night attack on CNN.

The former president has been bashing CNN's Don Lemon all week after the network announced he would move from evenings to mornings, and Trump singled out contributor Michael D’Antonio after he appeared to discuss his gathering legal problems.