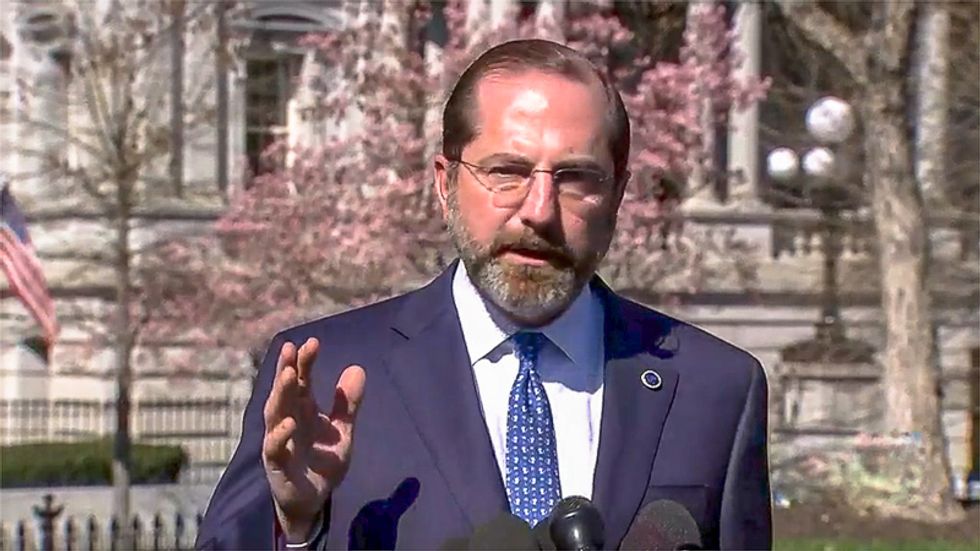 According to a report from the Daily Beast, Health and Human Services Secretary Alex Azar may soon be exiting the White House for refusing to sugarcoat information about the coronavirus pandemic when speaking with Donald Trump.

Azar, who attempted to alert the president about the looming COVID-19 pandemic threat in January, has rarely been invited to the president's daily coronavirus press briefings which could be a sign that his days are numbered.

As longtime political observer Eleanor Clift writes, after describing Azar as one possible "hero" in the White House: "Speaking truth to power has its price in the Trump administration. The former Eli Lilly executive was shouted down by White House aides as 'alarmist' and sidelined by Jared Kushner, Mike Pence and others willing to give the president a more rosy view. And on Sunday night, Trump lashed out at Azar by name for the first time, following a New York Times report that Azar had 'directly warned Mr. Trump of the possibility of a pandemic during a call on Jan. 30, the second warning he delivered to the president about the virus in two weeks.'"

According to Clift, "After complaining about 'mayhem' at the White House, Azar's future is uncertain but his attempts to get top officials and President Trump to pay attention to the coming pandemic should not be lost in the fog of war as Trump recasts history in his favor."

As the report notes, Azar has an "uneasy" relationship with the president who feels he's an "alarmist" -- which has never been a good sign for administration officials.

"Stylistically, they couldn’t be more different, and Trump doesn’t like bearers of bad news," Clift writes before quoting a former colleague of the HHS secretary saying, “He’s happy to suck up to the president once in a while, but he’s not going to change data or tell lies for anybody.He’s a highly ethical person.”

"In late January and early February, Azar argued for a multibillion dollar supplemental budget request, but White House aides rejected it as too high, and worried it would look alarmist. On Feb. 4, while Trump was delivering his State of the Union address in the House chamber, Azar called Russell Vought, the acting director of the OMB, who told him to submit a proposal, which he did the next day for more than $4 billion," Clift explained. " Aides didn’t like Azar going around them, and there was a shouting match in the Situation Room in the White House. As a former top pharmaceutical executive, Azar already had the reputation of being a prickly boss. He held his ground and defended his request, which the OMB cut almost in half to $2.5 billion. Days later, Congress voted $8 billion to boost the public health response, which should have vindicated Azar but only intensified the animosity toward him in the White House."

"Azar ran the administration’s response until Trump tapped Pence on Feb. 26. Azar has been sidelined ever since, with his agency disempowered in decision-making and his performance pilloried by a range of White House officials," the report states.

Twelve murders have taken place at a displaced camp in northeast Syria in just over two weeks, the UN said Thursday, sounding the alarm over an "increasingly untenable" security situation.

Held by Kurdish forces, Al-Hol camp -- Syria's biggest -- holds almost 62,000 people, of whom more than 80 percent are women and children, including Syrians, Iraqis and thousands from as far afield as Europe and Asia.