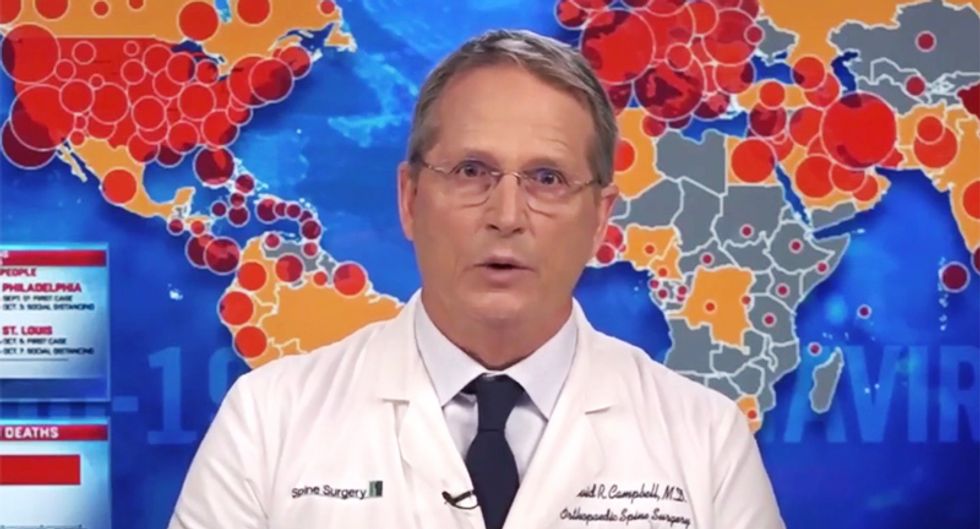 Appearing on MSNBC's "Morning Joe," during a panel discussion on the exploding COVID-19 pandemic in Florida, a doctor told hosts Joe Scarborough and Mika Brzezinski that the whole country will be paying the price for state lawmakers letting spring breakers flood the beach and expose themselves during the health crisis.

Explaining the explosive growth of the coronavirus pandemic, Dr. Dave Campbell said Florida's spring breakers have made medical professionals' jobs infinitely harder because they likely help spread the deadly virus to all points of the country.

"Let's look at the slide that I'm looking at right now that says no new cases today," Campbell, who is MSNBC's chief medical correspondent, said as the graphic appeared next to him. "That's not going to be the case when they finally tabulate it. It's going to go up -- thousands and thousands and thousands per day and, in fact, the number will become rather irrelevant."

"I think that we should look at this trend, because the trend will be for the next two weeks, every single day, we will see more cases and more deaths," he continued. "And, in particular, we're going to be paying the price for the spring breakers over the last two to four weeks that have come to the state of Florida, spread out over Florida, and have really spread the virus all around."

"So we are in for a very, very rough ride in Florida and all of the experts agree with that," he added. "The experts from Harvard, the experts from the major public health agencies, they're looking at Florida like it will be New York but in two to four to five weeks from now -- it's horrifying."