How an alliance of democracies can prevent future pandemics 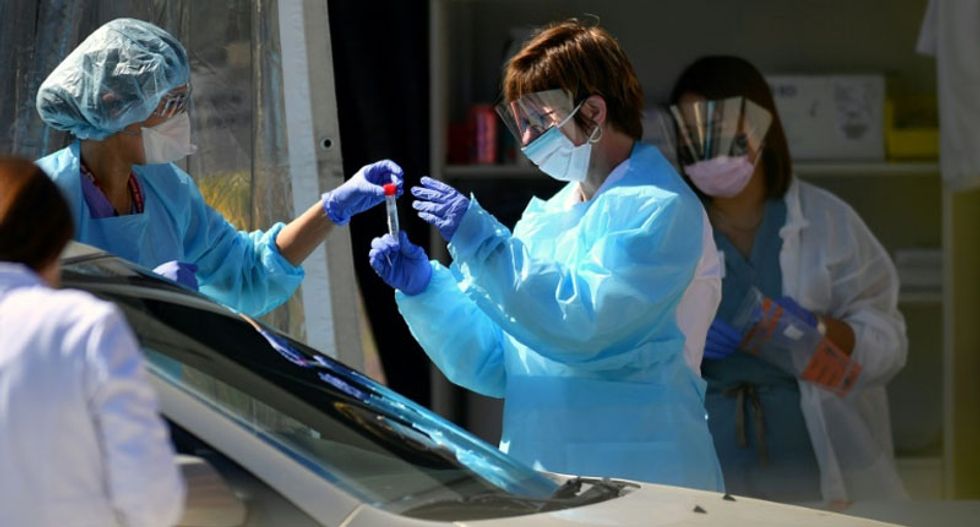 As the Coronavirus rages through communities across the world, nationalist voices are redoubling their critiques of "globalism." But it would be utterly naïve to imagine that a post–COVID-19 world will retreat to a condition with almost no international trade, business travel, global tourism, or migrations from poor or imperiled nations. We cannot solve the threat of more global pandemics by shutting borders lest we are willing to halve the world economy.

Of course nations should have strategic stockpiles of essential medical equipment and antibiotics, just as they should have food and energy reserves on hand. These reserves are public goods that free markets cannot provide by themselves; markets merely give companies incentives to reduce standing inventories to the smallest levels possible. To be prepared for future crises, we need to jettison the libertarian ideology that denies the importance of public goods or refuses to recognize their scope.

Moreover, for many nations, the most efficient way to build and store vital reserves would be to create shared stockpiles and agreements with large suppliers to keep extra stock on hand for them. Regional food reserves, for example, would reduce pressures on wealthier food-importing nations to try to control more arable land in developing nations. That would require reliable treaties governing the distribution of reserves during a crisis. The same goes for adequate health service staffing: nations need to have standing agreements to help each other in a pandemic rather than adopting a mutually self-destructive "everyone for himself" attitude. For example, the EU could then have done more to help Italy in the early stages of the coronavirus outbreak.

Scholars studying global coordination needs have warned for years about the dangers of a worldwide pandemic; the most cost-effective solutions all require more, not less, international cooperation. This means much better, smarter globalism – not just trade, travel, and communications, but real powers to govern. In his 2004 book "Global Collective Action," Todd Sandler explains that the World Health Organization (WHO) and the U.S. Centers for Disease Control (CDC) try to provide "outbreak intelligence and surveillance" for diseases with serious potential to become pandemics. Yet Chinese officials did not initially disclose the rapid spread of the SARS virus to the WHO when it surfaced in 2003.

We should have expected this to happen again, because nations do not want their trade and travel to be cut by a disease scare. We have legal mechanisms for ensuring that companies recall tainted products, and our law should enable all employees to stay home when they are ill by requiring paid sick leave. But there is nothing analogous to this yet for nations as "employees" in global trading; if they pause while grappling with an infectious outbreak, they may lose big.

This problem cannot be fixed by backward-looking nationalist retrenchment. It requires international cooperation. Consider a system — let's call it the Pandemic Prevention System (PPS) — in which many major economic powers pay into a global insurance fund that can compensate a nation like China for economic losses if it acts quickly to close areas to trade and travel in order to stop a dangerous outbreak at its source. The PPS could also impose mandatory and severe trade sanctions on nations that fail to take such responsible steps early on, while assuring significant medical aid to support responsible rapid containment actions. The PPS could even negotiate agreements with major medical suppliers to assure surge capacity in emergencies. With such a system in place, COVID-19 might not have spread beyond the Wuhan area. Yet for these carrots and sticks to be reliable, this system would have to be backed by a wide group of nations able to make binding mutual commitments to one another.

Enter the idea of broad alliance among democratic nations, which has been proposed now in several forms. Some proponents have envisioned expanding NATO to include democratic nations on other continents, while enlarging its mandates (e.g. the World Security Community). I and several other scholars have proposed a democratic league organized through a new treaty with significant security, financial, and trade powers. In February 2020, the Free World Commission of policymakers proposed closer cooperation between democracies to stand up to authoritarian regimes; and a related strategy paper published by the Atlantic Council advocates for an Alliance of Free Nations to facilitate a new free trade bloc and political cooperation.

Such an alliance of democracies could back the PPS to help stop new infectious diseases from becoming pandemics. (This idea has been proposed in various forms several times since the 2004 Princeton report by John Ikenberry and Anne-Marie Slaughter, "Forging a World of Liberty Under Law." For example, see Ivo Daalder and James Lindsey's "Democracies of the World, Unite," Alex Görlach, "Democracies Unite," and my book, "A League of Democracies.")  Other nations could join the PPS for its benefits, but noncompliant and free riding nations would have to pay attention if credibly threatened with deep trade sanctions. Such a system could also assure all contributing states that its costs will be widely shared. That avoids games of "chicken" in which a few countries end up paying most of the costs to stop a serious outbreak in a poorer region – as happened with Ebola in West Africa in 2014.

What will not solve this problem, however, is defunding the WHO while a lethal virus is spreading to developing nations, as Trump did recently. The WHO is hardly perfect, but it is not WHO's fault that it has to accommodate the demands of autocrats to get access to their countries. That is the collective fault of the world's leading nations for leaving it underfunded and unsupported by a strong alliance. Many treaty organizations and aid charities are in the same weak bargaining predicament; but a broad group of allied democracies could prevent dictatorships from manipulating essential international organizations like the WHO.

A similar logic applies to many other global problems, such as slowing climate change, deterring genocide, preventing the spread of terrorism, stopping cyber-propaganda and election hacking by autocracies, preserving biodiversity, helping developing nations reduce corruption, resisting money-laundering and cybercrime, and avoiding financial contagion in market crashes. In every case, what we need is not "less globalism" but rather global cooperation and governance that complement global trade and travel. That will require the leaders of major democracies around the world to forge a new alliance that is strong enough to sustain a better global system of rules and international organizations. This is the only way to secure public goods that require coordination among many nations.

In sum, our global situation today is analogous to that faced by the founders of the United States in the 1780s: without a much stronger union among the states, they could never achieve security for their fledgling nation. Hamilton, Madison, Jay, Washington, and their fellows never considered ending trade or travel between the 13 states to prevent them from warring or conspiring against each other. Rather, they argued for strength through a federation that could assure mutual protection and aid directed by shared decision-making. That is exactly what we need at the global level to meet 21stcentury challenges. Only the courage to build institutions that can deliver better global governance, not nativist blindness and prejudice, can save us from another pandemic even worse than COVID-19.

John Davenport is a professor of philosophy at Fordham University, where he teaches ethics and political philosophy, including human rights, democratic theory and global governance. He is the author of several articles and books, including A League of Democracies: Cosmopolitanism, Consolidation Arguments, and Global Public Goods (Routledge, 2019), which addresses the need to move beyond network governance in international relations.