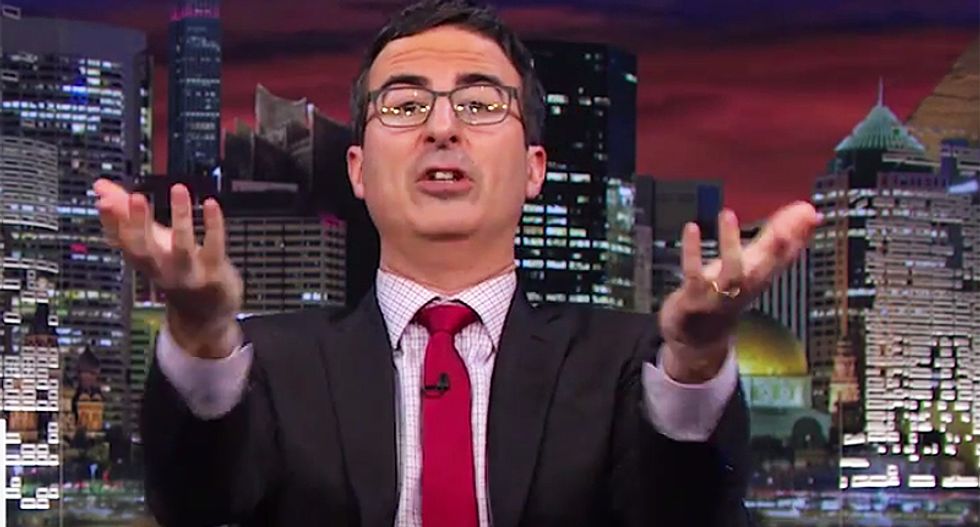 "Last Week Tonight" host John Oliver told Stephen Colbert in an interview that filming his show during the shutdown has been difficult because he has technological issues. He described it as being akin to a civilian being forced to land a plane. But the host managed to make it through to bash President Donald Trump, son-in-law Jared Kushner, and the governors of Alabama, Georgia, and Florida.

Oliver began by attacking Trump for praising himself for only 200,000 people, likely dying of coronavirus in the U.S. instead of millions.

"OK, setting aside the fact that leading disease forecasters are mystified at how Trump got to those numbers, trying to spin 200,000 deaths as a good job because it's not millions, is the most callous way to minimize the deaths of Americans imaginable," Oliver said. "Were it not for the fact that Trump responded to 9/11 on 9/11 by pointing out that he used to own the second tallest building in downtown Manhattan, now he owns the tallest. And the thing is, that wasn't just offensive, it wasn't even true."

Oliver then proceeded to hashtag his statement with #OurPresidentIsAnIndescribableDick.

The host moved on to discuss the failures of Jared Kushner, who argued that states shouldn't depend on a federal stockpile of medical supplies because it was for the federal government's use, not for the states. The website of the stockpile described it as being used for the states, but once it was pointed out to Kushner, the website was promptly changed.

"Wait, our stockpile? It's not your stockpile!" Oliver exclaimed. "It's a national stockpile for use by the United States you f*cking moron. And here's the interesting thing about the United States, it's almost entirely made of states. There's states everywhere. I'd say more than 40 of them, Jared. And some of them badly need supplies right now, like the city you used to live in, and I pray you never show your f*cking face again."

Oliver then moved on to shred Republican Govs. Ron DeSantis (FL), Brian Kemp (GA), and Kay Ivey (AL) for their failed response to the coronavirus threat in their states. He singled out Kemp for being so ill-informed that he didn't know that asymptomatic people could transmit COVID-19, a fact Oliver noted was known as far back as February. He ripped DeSantis for allowing a reckless right-wing pastor in Tampa to hold his megachurch services to infect more people. Finally, he blasted Ivey for being so clueless about her state's coronavirus cases that she doesn't even understand her state has a higher growth of coronavirus cases than California.