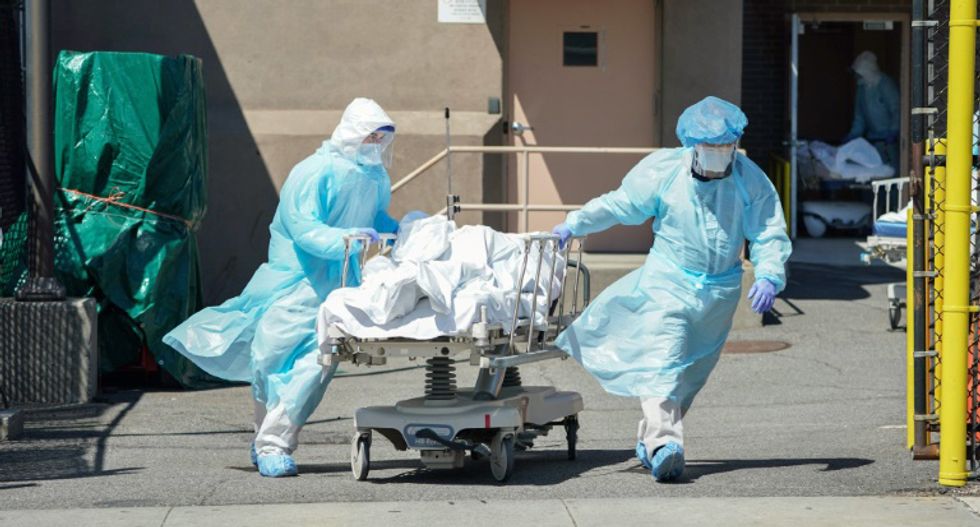 Bodies are moved to a refrigeration truck serving as a temporary morgue in New York, the main focus of the US outbreak, with more than 4,750 deaths. AFP / Bryan R. Smith.

The situation in some Michigan hospitals slammed by the COVID-19 pandemic has grown increasingly dire and hospitals are now reportedly running out of body bags to handle the dead.

MLive.com reports that workers at the Sinai Grace Hospital in Detroit say they have never faced anything like what they've seen during this pandemic.

Jamie Brown, president of the Michigan Nurses Association, tells MLive.com that shortages of protective equipment is only making a bad situation worse as many nurses treating COVID-19 patients fear getting ill themselves and infecting more people.

"There’s so much uncertainty when we walk into the hospital, and we don’t know that we’re going to be able to keep ourselves safe," Brown explained.

Michigan at the moment has documented more than 20,000 COVID-19 cases, which is the third-most of any state in the country, and its death toll is approaching 1,000 people, according to statistics compiled by the Johns Hopkins Coronavirus Resource Center.

SACRAMENTO, Calif. — The murder of Nancy Marie Bennallack, a 28-year-old court reporter who was brutally stabbed to death in October 1970 in her Sacramento apartment, remained a cold case for nearly 52 years. Her family and friends, including her fiancé she was supposed to marry about a month later, spent decades wondering if investigators would ever find the person who killed her. Using the same DNA genealogy techniques used to identify and capture the Golden State Killer and the NorCal Rapist, investigators at the Sacramento County Sheriff’s Office and the Sacramento County District Attorney...