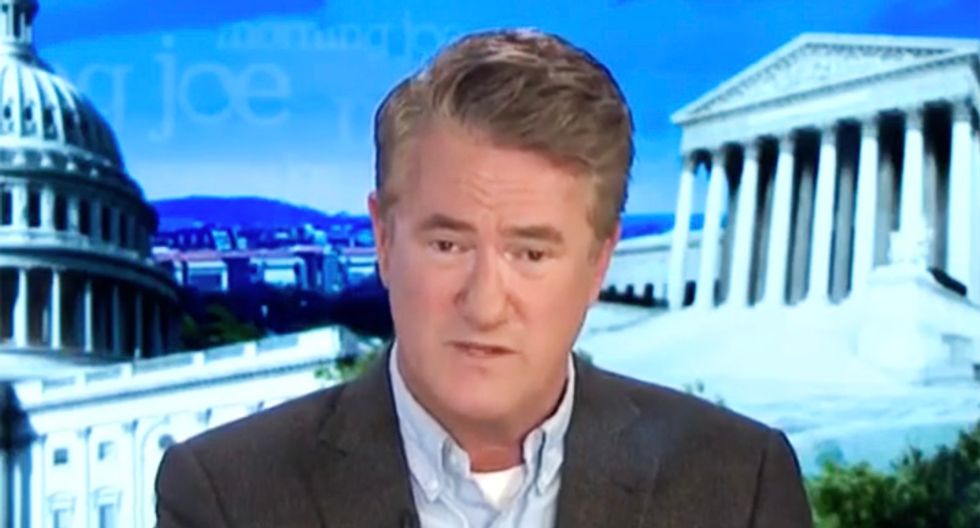 On MSNBC's "Morning Joe," host Joe Scarborough scolded Donald Trump for his abrasive and confrontational daily press conferences -- ostensibly to update the public about the efforts to combat the coronavirus pandemic -- and claimed that his "clownish" behavior has even his close allies in a panic.

Speaking with Morning Joe regular John Heilemann, Scarborough warned the president that his nationally televised meltdowns are crippling what is left of his presidency with  Heilemann taking a dig at the president saying "Buddy, it's not helping."

"The politics of this for Donald Trump are so bad," Scarborough began. "And it's not just because of the pandemic and it's not even because of just all of the really stupid things he said from the very beginning. The wishful thinking, the anti-science things that he said, the pro-China, just the kowtowing to President Xi and the next day praising them and then kowtowing again."

"I don't think the media should run the daily briefings, but it's not because I'm afraid they're helping Donald Trump," he continued. "I just -- they're not news, but they're actually hurting Donald Trump day in and day out. People see [New York Governor Andrew] Cuomo, even lifelong Republicans tell me they look at Cuomo and they're like, 'God, there's a leader, why can't Donald Trump stop tweeting? Why can't he shut his mouth? Why can't he just do his job?'"

"He's really damaging his political standing by going out every day and engaging in clownish behavior," he added.

"You know you're on to something in a situation like this in criticizing Donald Trump when [Republican Senator] Lindsey Graham agrees with you," Heilemann offered. "And you got someone like Lindsey Graham who never has, you know, after the years which he used to criticize Trump, once Trump became president Lindsey Graham will never ever, ever say anything to get on the wrong side of Donald Trump. His job, his sole purpose in life is to curry favor with Donald Trump, to pump up Donald Trump, and to inflate Donald Trump's ego and never say a cross word."

"Even Lindsey Graham is on the record now with reporters trying to send that message, you know, the SOS message with the blinking his eyes and the hostage video," he continued. "He's trying to tell Donald Trump over and over again, you are screwing this up, these briefings are not working for you."