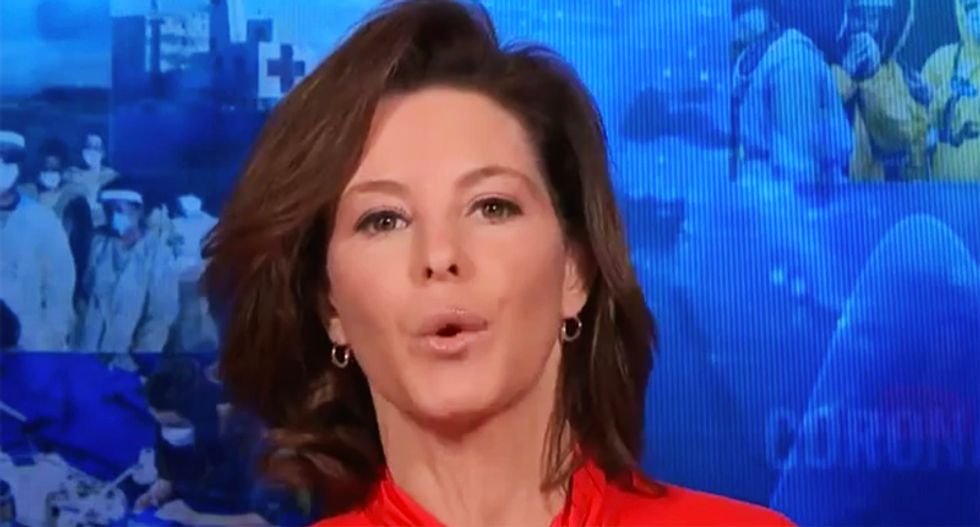 Appearing on MSNBC on Monday morning, former White House communications head Anthony Scaramucci got into a verbal scuffle with host Stephanie Ruhle when he attempted to make the case for Wall Street financiers scooping up as much of the multi-trillion dollar stimulus money as they can when it should be going to struggling businesses.

Ruhle, who had a very successful career on Wall Street before turning to journalism has been warning for days that wealthy Wall Street businessmen are already working with high-priced accountants and financial advisors on how they can take advantage of the trillions of dollars the government is pumping into the economy during the COVID-19 pandemic.

As the interview began, Scaramucci -- who runs a hedge fund -- pointed out that some of Ruhle's tweets over the weekend criticizing the cash grab via the Payroll Protection Plan was scaring some of his "guys" who are struggling to get their businesses off the ground.

"Just before we got on TV, I heard about a condo board in Tribeca. multimillion-dollar apartments, they're applying for this," host Ruhle pointed out. "Don't we run the risk the wrong people will get this and when the $350 billion runs out, what is that going to do for the gyms, restaurants and bars that really need this?"

"I went on the website over the weekend with my team to look at that, and it seems like they did filter in some language to protect against what you're talking about which is rich people looting the system and taking advantage of it and claiming they've been hurt by the coronavirus," Scaramucci stated before claiming he disagreed with analysts saying small businesses likely only have enough cash on hand to remain in business for 27 days.

"If people get too greedy, they could ruin it for everyone," Ruhle suggested. "On Friday, you reached out to me and asked me, do I think that small hedge fund managers should be eligible for this program? And, in my opinion, I would say absolutely not. Or maybe if there was an unlimited amount of money. So I turn the question to you: do you think money managers, small private equity firms should get this money? there's only $350 billion."

"Okay, so, obviously, large hedge fund managers, people like myself, we have no interest in the program, but all I was saying to you is there are small businesses that are in private capital and venture capital and they are tied to the multiplier effect of helping these businesses grow," Scaramucci replied. "And so just because the business has a name 'private equity' or 'hedge fund manager,' doesn't necessarily mean they are loaded with rich people. You have 25, 27, 28-year-olds that are starting businesses right now and, Stephanie, you scared the life out of some of them. They were calling me after your tweet saying, is this program not -- am I not eligible for this?"

"But Anthony, a hedge fund didn't have to shut down," The MSNBC shot back. "You can set up a Bloomberg terminal in your house. A restaurant went to zero revenue and, last time I checked, nobody's management fees are getting touched."

Following a back and forth, Scaramucci claimed, "You did scare a couple of these young guys, Stephanie. I want to point that out to you."

"Anthony, I'm okay with that," she replied. "Anthony Scaramucci, thank you for joining me. I appreciate it. Anthony, guess what? You know what? I'll make an open invitation: any private equity fund or hedge fund manager, come join me on air. I'd love to discuss why you believe you're eligible for the program. I'm open for it."

"I'll get a couple of these young guys to take you up on it and they're just trying to create jobs and flow capital into the society, Stephanie. They're not all demonic people," he asserted.

"Anthony, you know I don't think that, that's my background, I came from Wall Street," she parried.

"I know that. that's why I'm --," he attempted before the MSNBC host cut him off with, "I love great American capitalism. At this moment, when we're talking about a program for service businesses that are about to go under, my heart is not bleeding for the hedge fund industry."