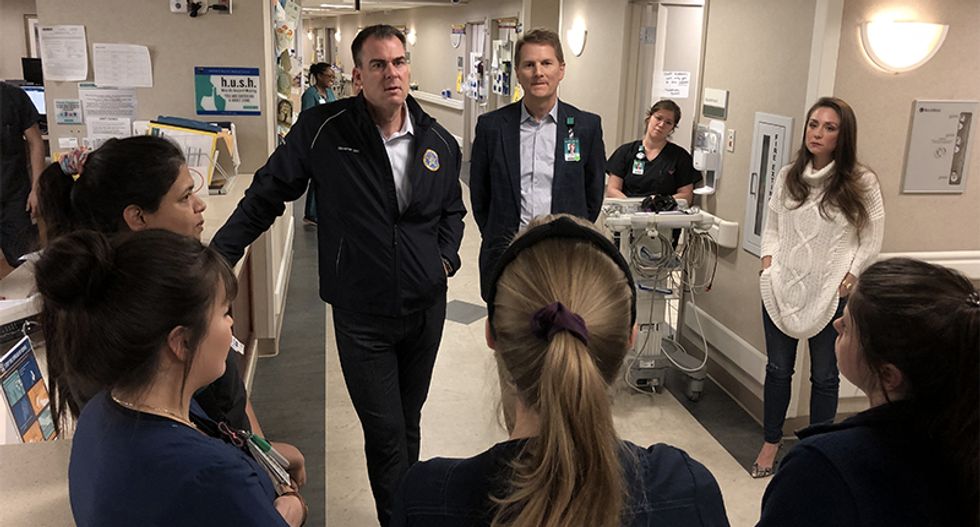 Typically when there is a disaster or a crisis, politicians take to the streets to shake hands, give hugs, and survey the land. With the coronavirus things are different. People are trying to stay apart, protect themselves from germs, and keep the virus contained. One person didn't seem to get the memo, however.

Oklahoma Gov. Kevin Stitt (R) was among the few governors who refused to issue a shutdown order in his state, preferring to allow cities to make their own decisions.

Meanwhile, he bragged on Twitter about standing shoulder to shoulder with a group of students from Enid, Oklahoma, while a majority of Americans where photos show few were observing the six-foot rule.

Finally, after bucking the trend and being called out on MSNBC's Rachel Maddow, Stitt decided to order social-distancing. But while the government claims to be doing all of the right things, he's not living the quarantine life. Instead, he's visiting places around Oklahoma to talk to people on the front lines of the crisis, without a mask.

Photos showed no one in the lab was wearing personal protective equipment as they huddled together.

He then turned to his advisers as they did a video conference with the president. None of the people at the table were sitting six feet apart.

The governor took any of those germs acquired at previous visits to a hospital to investigate how healthcare workers were doing. Thankfully, most of the nurses kept their distance, but Stitt refused to use any protective equipment again.

He then took his show to Stillwater, Oklahoma to look at test kits at Oklahoma State University. In one photo he was featured wearing gloves, but still wasn't wearing a mask.

While schools are closed down, Still went out to Martin Luther King Elementary, where meals were being handed out. He was finally wearing gloves, but still no mask.

He then took his tour to schools in Oklahoma City.

"Great visiting @IMMYdiagnostics yesterday with Dr. Schrum to see some of our state's new testing kits. With over 15,000 kits available statewide, Oklahoma is continuing to increase our stockpile to test as many people as possible & make data-driven decisions," Stitt tweeted.

The governor took all of the germs acquired at those previous places to deliver food to the elderly.

Oklahomans responded to the governor with questions as to why he was refusing to follow social distancing guidelines, wear masks or other PPE, and spread germs from place to place.

You can see their comments below:

@GovStitt @EndingHungerOKC @realDonaldTrump OK, our country, and the world are in crisis over the spread of this vi… https://t.co/VRhIKWgY9D
— Sybi (@Sybi) 1585708831.0

@nancy6072 @GovStitt @EndingHungerOKC Same I live near Coalgate and people are just all over the place like nothing… https://t.co/TbB8GQdJc8
— Joshua McDonald (@Joshua McDonald) 1585826963.0