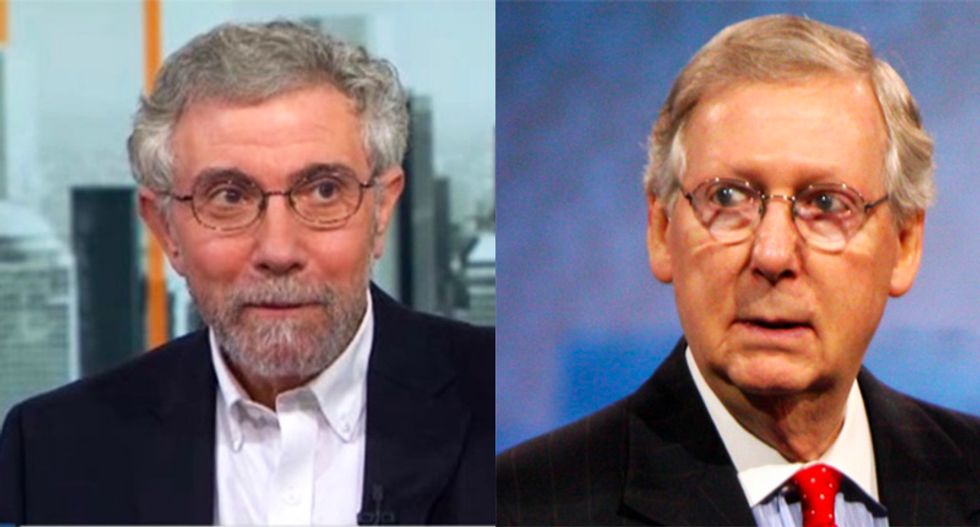 In a decidedly blunt column for the New York Times, Nobel Prize-winning economist Paul Krugman took Senate Majority Leader Mitch McConnell (R-KY) to the woodshed for suggesting that states should file for bankruptcy instead of asking the federal government for funds to deal with the COVID-19 health crisis.

In a word, he called the senior Republican's proposal: "stupid."

Under a headline that read, "McConnell to Every State: Drop Dead, " Krugman began, "Covid-19 has killed tens of thousands of Americans, and will clearly kill many more. The lockdown needed to contain the coronavirus is causing an economic slump several times as deep as the Great Recession. Yet this necessary slump doesn’t have to be accompanied by severe financial hardship. We have the resources to ensure that every American has enough to eat, that people don’t lose health insurance, that they don’t lose their homes because they can’t pay rent or mortgage fees. There’s also no reason we should see punishing cuts in essential public services."

Noting that McConnell "declared that he is opposed to any further federal aid to beleaguered state and local governments, and suggested that states declare bankruptcy instead," and adding that McConnell's office distributed two memos referring to proposals for state aid as “blue state bailouts,” Krugman highlighted some governors responding to the proposal "as stupid, which it is. But it’s also vile and hypocritical."

"When I say that we have the resources to avoid severe financial hardship, I’m referring to the federal government, which can borrow vast sums very cheaply. In fact, the interest rate on inflation-protected bonds, which measure real borrowing costs, is minus 0.43 percent: Investors are basically paying the feds to hold their money," the economist lectured. "So Washington can and should run big budget deficits in this time of need. State and local governments, however, can’t, because almost all of them are required by law to run balanced budgets."

"The obvious answer is federal aid. But McConnell wants states and cities to declare bankruptcy instead," Krugman wrote. "This is, as I said, stupid on multiple levels. For one thing, states don’t even have the legal right to declare bankruptcy; even if they somehow managed all the same to default on their relatively small debts, it would do little to alleviate their financial distress — although it could cause a national financial crisis."

The economist then focused on states like McConnell's that are being hard hit by more than the coronavirus.

"The idea that this is specifically a blue state problem is ludicrous. Fiscal crises are looming all across America, from Florida to Kansas to Texas — hit especially hard by crashing oil prices — to, yes, McConnell’s home state, Kentucky," he explained. "And if states and local governments are forced into sharp budget cuts, the effect will be to deepen the economic slump — which would be bad for Donald Trump and could cost Republicans the Senate. So yes, McConnell’s position is stupid. But it’s also vile."

"Last but not least, let’s talk about McConnell’s hypocrisy, which like his stupidity comes on multiple levels," the economist elaborated. "At one level, it’s really something to see a man who helped ram through a giant tax cut for corporations — which they mainly used to buy back their own stock — now pretend to be deeply concerned about borrowing money to help states facing a fiscal crisis that isn’t their fault. At another level, it’s also really something to see McConnell, whose state is heavily subsidized by the federal government, give lectures on self-reliance to states like New York that pay much more in federal taxes than they get back."

Summing up, the New York Times columnists said that there is more at play when McConnell made his pitch.

"Of course, McConnell has an agenda here: He’s hoping to use the pandemic to force afflicted states to shrink their governments. We can only hope both that this shameless exploitation of tragedy fails and that McConnell and his allies pay a heavy political price," he concluded.