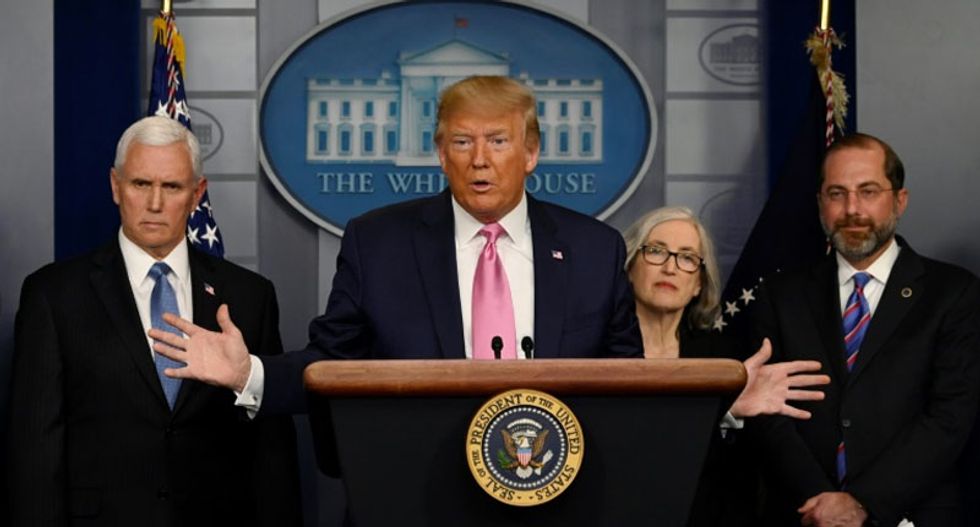 Longtime observers -- as well as friends -- of Mike Pence are expressing shock and dismay that the vice president stood by silently on Monday when Donald Trump claimed that, as president, he has "total authority" to do as he pleases, saying the president's bold assertion goes against everything Pence has always professed to believe.

In interviews with Politico's Adam Wren, one of Pence's rivals who has maintained good relations with the Indiana lawmaker, as well as the veep's biographer, said Pence is a changed man under Trump.

Noting that Pence looked "uncomfortable" as Trump made his Monday remarks during a contentious White House task force press conference Wren added that Pence followed up with a plug for the president's claim, saying, "Make no mistake about it. In the long history of this country, the authority of this country, the authority of the president of the United States during national emergencies is unquestionably plenary,” Wren pointed out that the vice president disregarded his own history of opposing an imperial executive power.

"For his entire previous political career, six years in Congress and four as governor, Pence vociferously dug in, in deeply principled terms, against what he saw as overreach from the White House and Washington. In defending Trump’s claims of absolute power, Pence bucked a career-long ideological commitment to federalism—one he ardently espoused in speeches, op-eds and interviews with journalists," Wren relates. "Pence built an entire abandoned 2016 presidential campaign around the theme of a 'vision of renewed federalism.' In 2014, he lectured then-President Barack Obama on an Evansville tarmac about Medicaid expansion. He promised that Indiana wouldn’t comply with Obama’s Clean Power Plan. He even turned down an $80 million federal grant for preschool for 2,000 children, claiming it would result in 'federal intrusion.' For decades, Pence was guided by the 10th Amendment, which reserves for the states power that is not explicitly granted to the federal government by the Constitution, and he saw a robust role for states as proverbial laboratories of democracy."

According to John Gregg, who ran against Pence in 2012 and 2016 for Indiana's governorship, and who was hand-selected by Pence to take over one of his radio shows after he was elected to Congress, the man the vice president is now is not the man he has known for years.

“The president is all but the king? This is the best example I’ve seen of the vice president getting away from his philosophy,” Gregg said in an interview with Politico. "It just makes me wonder, what kind of hold does the president have on some of these people.”

“What happened to the guy that fought for the Medicaid waiver?” LoBianco asked. “He fought for two years on that."

“The trouble and the challenge for Pence has always been trying to match his theology and strict message discipline to wherever Trump is moving at any given moment,” he continued. “I don’t think he’s tossing federalism out the door. I think the president is changing his tune and he’s trying to keep with that tune. It creates an incredible amount of discord if you look back at his own record.”

According to Gregg, Pence's change of heart has everything to do with being tabbed by Trump to be his vice president and dragging him back into national politics.

“The vice president jumped right on the Trump train,” Gregg explained. “He realizes that the president brought him to dance.”

Rep. Bennie Thompson (D-MS), the chairman of the House Select Committee investigating the January 6 Capitol riots, has put the inspector general's office for the Department of Homeland Security on notice.