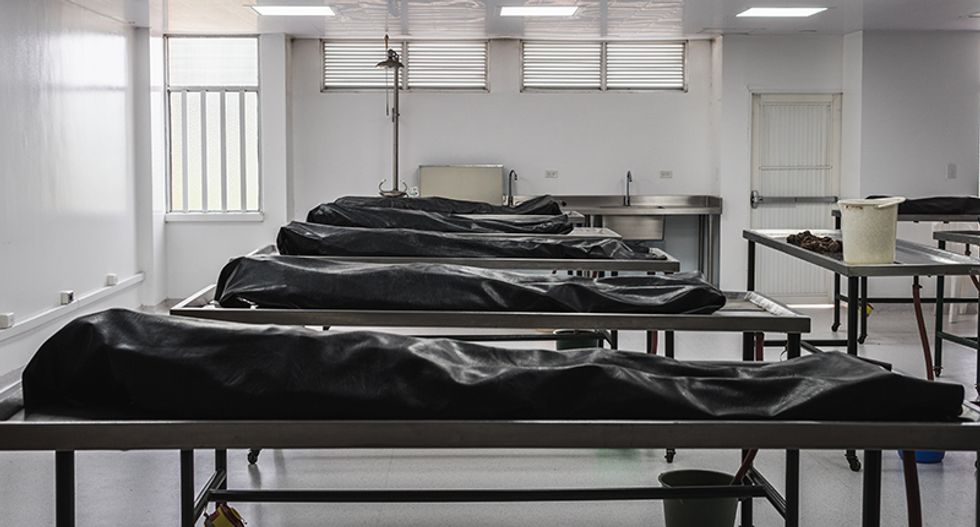 On Wednesday, The New York Times reported that police have found a large number of bodies overloading a small morgue at a nursing home complex in Andover, New Jersey that has been overwhelmed with coronavirus cases.

"The call for body bags came late Saturday," reported Tracey Tully. "By Monday, the police in a small New Jersey town had gotten an anonymous tip about a body being stored in a shed outside one of the state’s largest nursing homes. When the police arrived, the corpse had been removed from the shed, but they discovered 17 bodies piled inside the nursing home in a small morgue intended to hold no more than four people."

"The 17 were among 68 recent deaths linked to the long-term care facility, Andover Subacute and Rehabilitation Center I and II, including two nurses, officials said," continued the report. "Of those who died, 26 people had tested positive for the virus. For the others, the cause of death is unknown."

"Of the patients who remain at the homes, housed in two buildings, 76 have tested positive for the virus; 41 staff members, including an administrator, are sick with Covid-19, the disease caused by the coronavirus, according to county health records shared on Wednesday with a federal official," said the report. "With beds for 700 patients, Andover Subacute is, records show, the state’s largest licensed facility — and the risk of continued spread is terrifying to family members who have turned to social media and their local congressman, desperate for answers and extra personnel."

"One of the owners of the facility, Chaim Scheinbaum, did not return calls or emails," said the report. "Staff members who answered phones at the facilities said they were not authorized to speak to the news media."