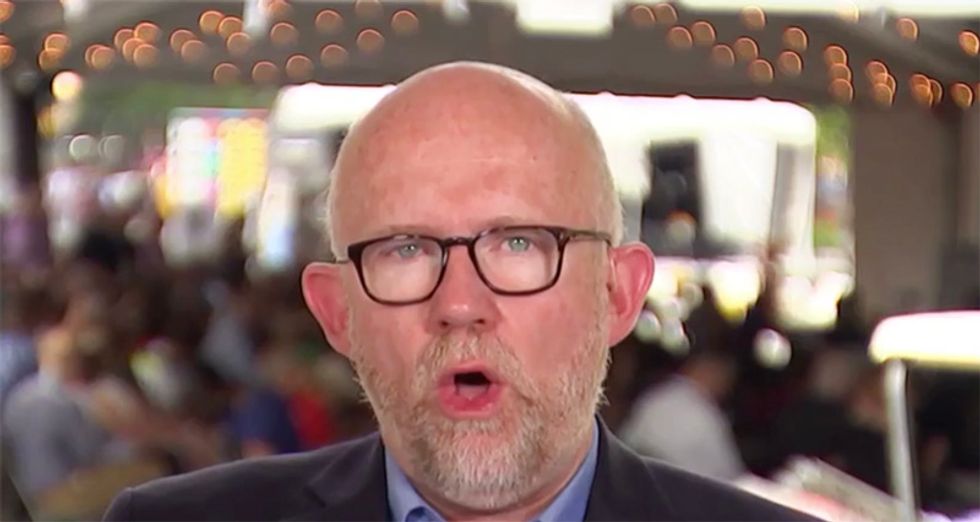 In a typically blunt column for the Daily Beast, conservative campaign consultant Rick Wilson hammered Donald Trump for both his claim to wield "total authority" and for inciting his most rabid followers to hit the streets and protest against Democratic governors who are attempting the stem the spread of the COVID-19 virus.

According to Wilson, "Donald Trump fired the first shots in the COVID Civil War this week, a modern-day Jefferson Davis of the Pro-Plague States of America sending his opening salvo from Fort Twitter at Democratic governors who dared to question if it wasn’t just a wee bit early to end the stay-at-home orders in states still far to the left of the peak. He started the week with claims of 'total authority' and then cried about a supposed mutiny by mouthy state leaders. By Friday, he was up to calls to 'liberate' states.

According to the conservative, Trump lit the fuse and his biggest boosters -- Fox News and his Facebook mob -- did the rest encouraging the public to cause a ruckus.

"First of all, you should understand that none of this—zero, zip, nada —is organic. None of this is real. Every bit of it is being pushed on Trump’s behalf via the twin modalities of our doom: Fox and Facebook," he wrote. "The crowds showing up for these 'liberation rallies' are lowing cattle, led down a chute to be fed or slaughtered, depending on the day. Their ignorance of their own state as philosophical zombies whose lives Trump is literally willing to sacrifice for a tiny bump in the stock market is breathtaking. Dying for a second-order economic effect will show the libs, right?"

"He wants his rebellion because it feeds into his brand of transgression and he believes it will benefit him politically; Donald Trump’s never tried to liberate a damn thing in his life except for banks from their money, porn stars from their panties, and rubes from their votes," Wilson continued. "Let’s be clear about the things he’s going to do and the risks he is willing to take with the American people. Trump is telling us bluntly and plainly that he will stoke civil unrest to find a political pathway out of a galactic-scale fuck-up of his own making. He’s willing to let a disease that’s already killed 33,000 Americans due to his inaction and dishonesty spread further, faster, and more widely."

Explaining that Trump knows his rabid base will run with any "crazy idea" he puts into their heads, Wilson stated that the president is risking their lives by putting them at risk of contracting the coronavirus to fulfill his own needs -- and that he doesn't care.

"Many of the people at his 'liberation' rallies may well get or spread COVID-19, just when the country’s continued diligence and caution about flattening the curve through social distancing is most vital. These engineered protests are taking resources that first responders desperately need to respond to the crisis, not Trump’s crisis actors. The one person who won’t pay a price? Donald Trump," he wrote before concluding, "Immune to political pressure, unable to process moral responsibility, and unwilling to put anything above his raw, raging ego and his boundless desire to hold power, he’ll keep badgering his base to start the COVID Civil War, one tweet at a time."