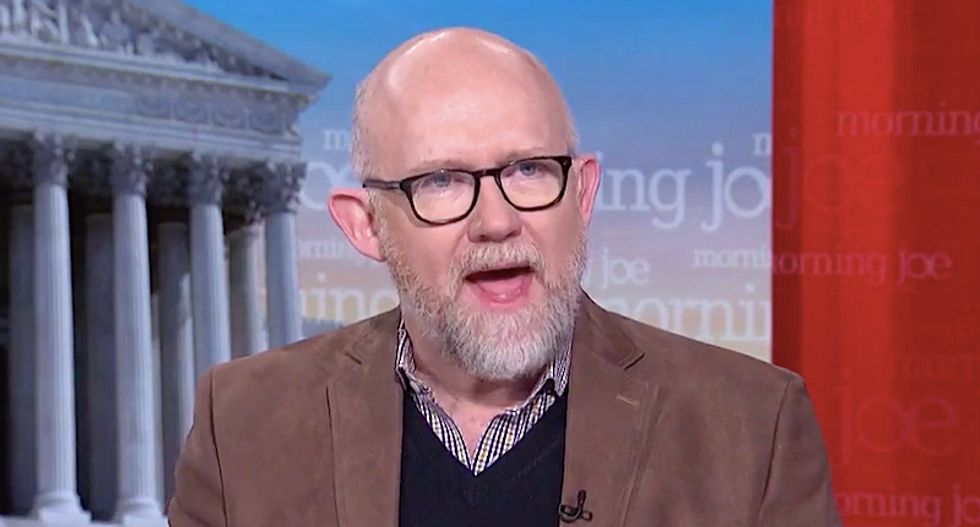 In yet another scathing column for the Daily Beast, conservative campaign consultant Rick Wilson lashed out at Donald Trump for using the daily White House task force press briefings on the coronavirus pandemic as a chance to strut and perform for his adoring fans while over 10,000 Americans have died -- so far.

According to the Wilson, who has become one of the president's most vocal critics, "Like some defective and malevolent artificial intelligence that reflexively fires off nuclear missiles long after the world is a blasted radioactive wasteland populated by tribes of cannibal mutants and murderous scavengers, the Trump media machine relentlessly continues its bizarre and destructive propaganda war against America."

"While armies of doctors, nurses, respiratory therapists, truck and delivery drivers work in conditions of terror and exhaustion with limited equipment and a rising caseload, The Trump Show rolls on to constant applause and endless praise, an alternate reality impenetrable by tragedy or reality," he wrote before adding, "Ten thousand Americans will be dead of COVID-19 by the time you read this, but at least the Trump agitprop army is owning the libs. "

According to Wilson, the president and his allies are already busy trying to re-write the storyline of how he screwed up protecting Americans from the pandemic that has brought Americans to their knees, with the conservative marveling at the moral depravity exhibited by the president's cult of admirers.

Wilson aimed a great deal of his ire at Fox News for first dismissing the pandemic and then "turning on a dime" and cheerleading for president when things took a terrible turn for worse.

Writing, "At the top of the food chain is Fox News, of course. A network that has suddenly run like a scalded dog from its two months of 'Corona what? It’s the flu! Hahaha time to travel and buy stocks!' attitude. Recognizing too late that they played a meaningful role in suppressing public awareness and concern over the coronavirus pandemic, Trump’s favorite network has turned on a dime," he continued, " he House Rupert Built was made for this. They’re busy attacking the main enemy in the battle with an implacable viral opponent: the media and the Democrats. This was the fundamental lesson of Roger Ailes by way of Saul Alinsky (and isn’t that a combination you never saw coming?); propaganda of their flavor needs an enemy, and the only enemies that matter to MAGA world are the media, smart people, and anyone opposed to Trump."

"As consequential and as deadly as the coronavirus pandemic has been, and will continue to be, the Trump media machine can’t stop and won’t stop its relentless propagandizing and historical revision. Trump is the hero," he charged before concluding, "Even with over 10,000 Americans dead in part because of Trump’s deception, denial, and delay, the number of fucks they give is asymptotically approaching zero, and will never budge. Like Trump, shame, reality, and responsibility are alien concepts that fail to own the libs, and thus have been utterly abandoned."