Spurred on by Trump and his biggest supporters, Bill Gates has become a target of coronavirus conspiracy kooks 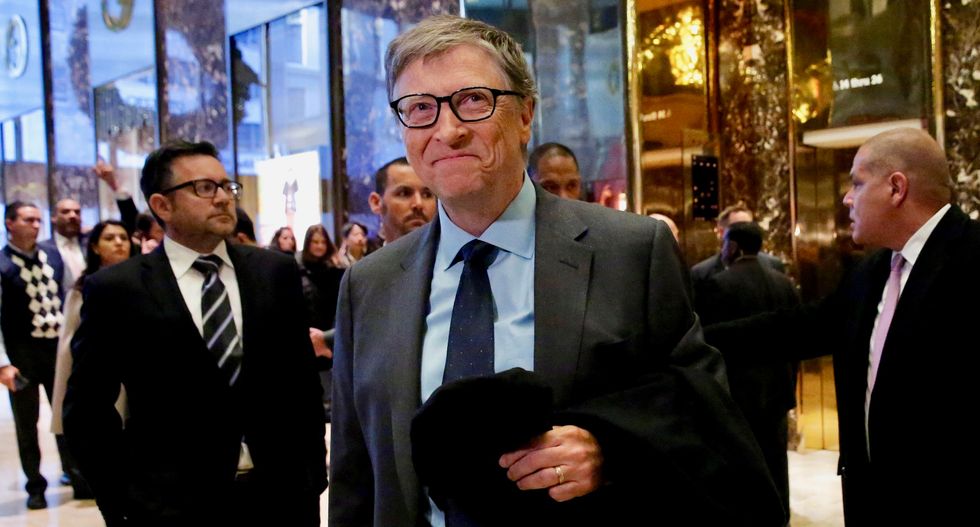 As part of the fall-out from Donald Trump's campaign of misinformation about the coronavirus in an attempt to re-start the economy and salvage his re-election prospects, billionaire Bill Gates has become the target of supporters of the president because he has very publicly differed with the president on how to handle the health crisis.

And with that have come conspiracy rumors about the Microsoft founder who is sinking a portion of his fortune into finding a vaccine for the deadly COVID-19 virus.

According to a report from New York Times, Gates delivered a speech back in 2015 that warned of a coming pandemic which has given rabid fans of Trump -- as well as the QAnon conspiracy mongers -- fodder for accusing the businessman of suspicious behavior.

"That speech has resurfaced in recent weeks with 25 million new views on YouTube — but not in the way that Mr. Gates probably intended. Anti-vaccinators, members of the conspiracy group QAnon and right-wing pundits have instead seized on the video as evidence that one of the world’s richest men planned to use a pandemic to wrest control of the global health system," the Times report states before adding, "In posts on YouTube, Facebook and Twitter, he is being falsely portrayed as the creator of COVID-19, as a profiteer from a virus vaccine, and as part of a dastardly plot to use the illness to cull or surveil the global population."

According to Zignal Labs, a media analysis company, Gates has become a sensation on social media -- but not in a good way.

"On YouTube, the 10 most popular videos spreading lies about Mr. Gates posted in March and April were viewed almost five million times," the Times reported before adding that the billionaire philanthropist has taken a place next to fellow billionaire George Soros in conspiracy theory circles.

According to Whitney Phillips, an assistant professor at Syracuse University, "Bill Gates is easily transformed into a health-related meme and figure because he’s so well known. He’s able to function as kind of an abstract boogeyman.”

What set Trump's most rabid fans off was an editorial Gates wrote for the Washington Post where he criticized the Trump administration's response to the pandemic in which he wrote, “There’s no question the United States missed the opportunity to get ahead of the novel coronavirus.”

According to the report the "Gates Foundation said it would commit $250 million — up from an earlier pledge of $100 million — to slow the disease’s spread," earlier this week, but by then, "falsehoods about Mr. Gates had taken off. The first mention of a baseless conspiracy connecting him to the outbreak was on Jan. 21, according to the Times analysis. That was when a YouTube personality linked to QAnon suggested on Twitter that Mr. Gates had foreknowledge of the pandemic. The tweet was based on a coronavirus-related patent from the Pirbright Institute, a British group that received funding from the Gates Foundation."

"The patent was not for Covid-19; it was connected to a potential vaccine for a different coronavirus that affects poultry. But two days later, the conspiracy website Infowars inaccurately said the patent was for “the deadly virus," the report states. "The idea spread. From February to April, conspiracy theories involving Mr. Gates and the virus were mentioned 1.2 million times on social media and television broadcasts, according to Zignal Labs. That was 33 percent more often, it said, than the next-largest conspiracy theory: that 5G radio waves cause people to succumb to Covid-19."

Adding to Gates's problems are comments made by Fox News personality Laura Ingraham who has been pushing for a rush to re-open businesses during the pandemic and has provided forums for advocates of sketchy "cures" for the virus.

"In an April 7 tweet, Ms. Ingraham, a Fox News host, shared a conspiracy theory about nefarious motives behind Mr. Gates’s call to track and identify who had received a Covid-19 vaccine. “Digitally tracking Americans’ every move has been a dream of the globalists for years,” she wrote, the Times reports.

Ingraham, the Times noted, refused an offer to comment on the story.