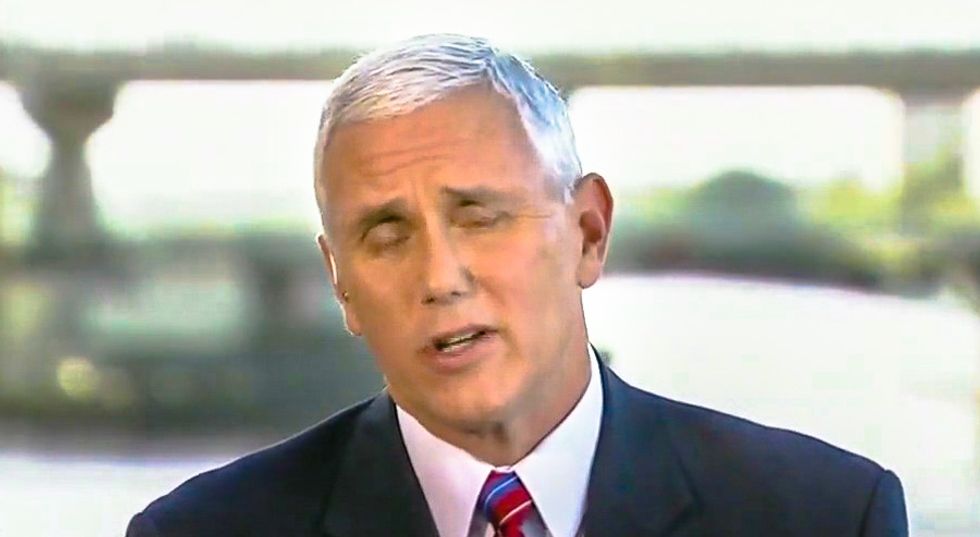 Vice President Mike Pence on Wednesday defended President Donald Trump's handling of the COVID-19 pandemic by falsely claiming that the president had never sought to belittle the threat the virus posed.

"I don't believe the president has ever belittled the threat of the coronavirus," Pence said.

A massive trail of evidence shows otherwise, however.

"Because of all we’ve done, the risk to the American people remains very low," Trump said on February 26th. "When you have 15 people, and the 15 within a couple of days is going to be down to close to zero."

"It’s going to disappear," Trump said of the virus on February 28th. "One day, it’s like a miracle, it will disappear."

"We’re the number one travel destination anywhere in the world, yet we have far fewer cases of the disease than even countries with much less travel or a much smaller population," Trump said on February 29th.

Just over one month after Trump made those statements, America now leads the world with more than 190,000 reported COVID-19 cases and over 4,000 deaths from the disease.

Pence's falsehood about Trump not downplaying the virus drew a swift rebuke -- check out some reactions below.

Mike Pence today on CNN: "I don't believe the president has ever belittled the threat of the coronavirus." Except… https://t.co/SFjwBDUclo
— Mark Jacob (@Mark Jacob)1585757199.0

Mike Pence: "I don't believe the president has ever belittled the threat of the coronavirus." Me, reading the lis… https://t.co/8X6KTr9YMa
— TrumpsTaxes (@TrumpsTaxes)1585756999.0

🤥Pence: I don't believe the president has ever belittled the threat of the coronavirus. Wolf recites Trump's words… https://t.co/qu5P2HUZJc
— Paula Chertok🗽 (@Paula Chertok🗽)1585757687.0

Listened to @wolfblitzer interviewing @VP and must congratulate Wolf on his constraint in not calling Pence a fu(ki… https://t.co/aMuFxf1wEq
— Polly Anti (@Polly Anti)1585757116.0