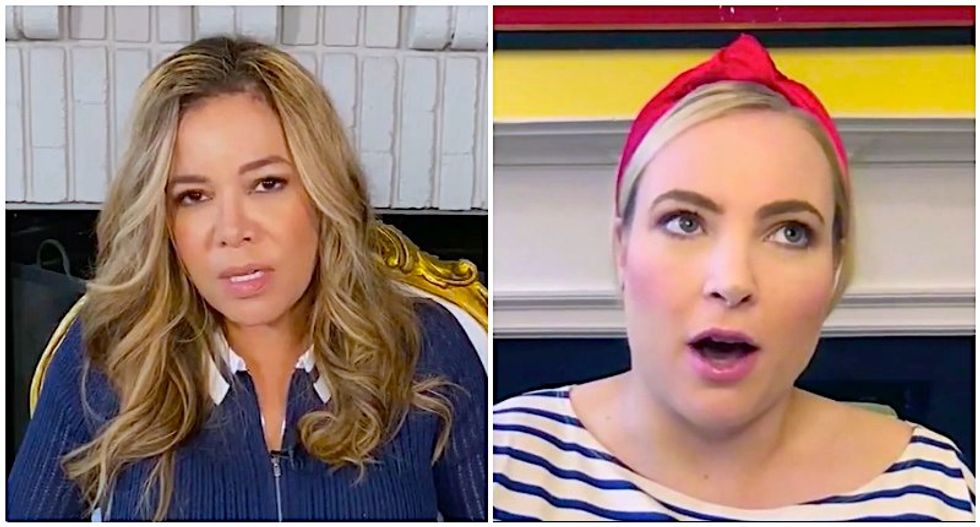 President Donald Trump's re-election campaign released an ad showing Pelosi's appearance on a late-night comedy show, where she talked about her favorite ice cream while standing in front of a pair of high-end refrigerators in her kitchen.

"I thought it was a kill shot," McCain said. "It's not the ice cream in her fridge, it's the fact that she's standing behind giant refrigerators, multiple ones that cost $24,000 each, and you're right -- politicians are wealthy, Trump is wealthy, but I think in this specific moment, optics are narratives. I don't make the rules of politics, this is just how it works."

McCain agreed with co-host Joy Behar that Pelosi's appearance was off-key while Americans were suffering from the far-reaching effects of the coronavirus pandemic.

"There are too many mine fields you can step into in a situation like this, and this is an effective attack ad and she's talking about a quarter of a trillion dollars that she is holding up for small businesses," McCain said. "Now, again, I understand Democrats and Republicans are going to view this from different lens, but seeing $24,000 refrigerators and joking about holding up money for small businesses at the same time they're showing videos of people saying that they're starving and showing pictures of their fridges which are empty, it is very effective. Trust me when I say this, it will play very well in the middle of the country."

Hostin disagreed, saying the ad trumped up faux outrage in an effort to distract from the president's coronavirus failures.

"Back to the James Corden interview that was, like, a week ago with Nancy Pelosi, I mean, that's just manufactured," Hostin said. "I think Fox News outrage and Republican outrage. They're talking about but her freezer, but her freezer -- I'm really worried about the bodies that I saw being put into freezers in New York. That's what i'm worried about."

"I'm really worried about the fact that there's no testing being done, the fact that the -- you know, the vice president is saying that we are testing 150,000 people a day and that that's enough," Hostin continued. "Well, that's not enough because it would take six years to test everyone. So that's really, you know, what I'm worried about."

"Blaming some Democratic message for Trump's incompetence and for Trump's negligence in managing this crisis is absolutely ludicrous," she added. "This is not a Democratic problem, this is not a Republican problem -- this is the coronavirus, and this is about the Trump administration's failure to address it properly, leading to over 40,000 lost American lives. Let's not miss the point, people."