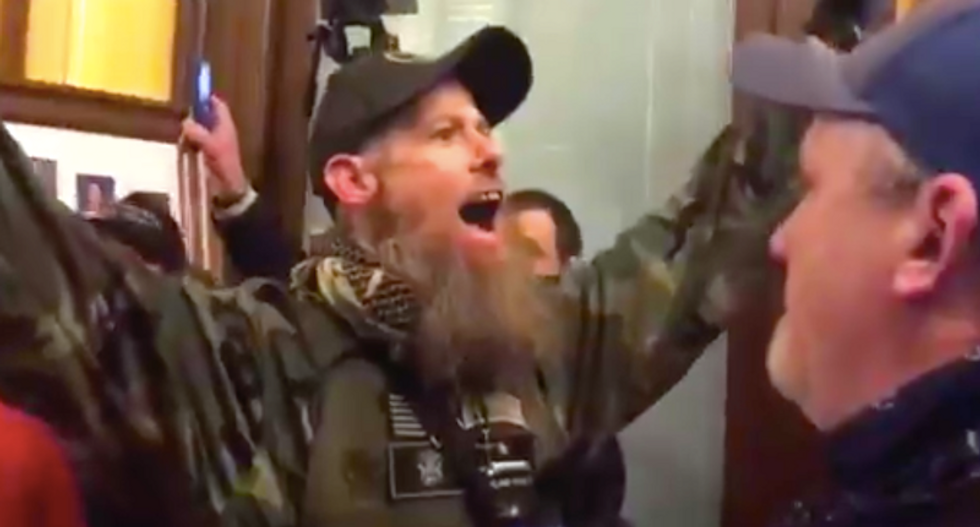 Armed Michigan right wingers extremists angry they are being required to stay-at-home and wear masks when in public to avoid spreading coronavirus on Thursday took over the Statehouse in a near-riot tantamount to an armed occupation. Some are calling it terrorism. According to reports the State Police and Sergeants at Arms are all that stood between them and access to the House floor. The target of their protest is Democratic Governor Gretchen Whitmer.

As the videos below shows, their wall-to-wall "protest" has created a dangerous laboratory for the deadly coronavirus, as they stand shoulder to shoulder chanting and yelling, almost urging the coronavirus to infect them.

Here are a few videos.

Many took to social media to lambast the right wing nuts.

Fred Guttenberg, who lost his daughter in the devastating at Marjory Stoneman Douglas High School mass shooting in Parkland, Florida, weighed in:

It’s not a peaceful protest when one side brings a heavily armed vigilante force with them. That’s fear. That’s i… https://t.co/7CN9GWhzvP
— Guns Down America (@Guns Down America) 1588276048.0

At what point can we call the armed, non-PPE-wearing "protesters" that stormed the Michigan Capitol terrorists?… https://t.co/rfELcLA7om
— Mike (@Mike) 1588276176.0

Are we are likely hours if not minutes from Trump calling these angry white "protestors" armed with semi-automatic… https://t.co/dDvwhVsIkZ
— Amy Siskind 🏳️‍🌈 (@Amy Siskind 🏳️‍🌈) 1588277285.0

If this was black or brown people with guns it would be called riot. They would be there for different reasons thou… https://t.co/W53wfBGaiB
— Rosemary Kirincic (@Rosemary Kirincic) 1588276784.0

Curious about the racial demographics of the gunmen who have stormed the statehouse. https://t.co/bVRoEg2xYO
— Soledad O'Brien (@Soledad O'Brien) 1588273975.0

Imagine going to a state capitol armed to the teeth in a transparent attempt to incite an armed incident because yo… https://t.co/KCz9JrpT9S
— Pé (@Pé) 1588279970.0