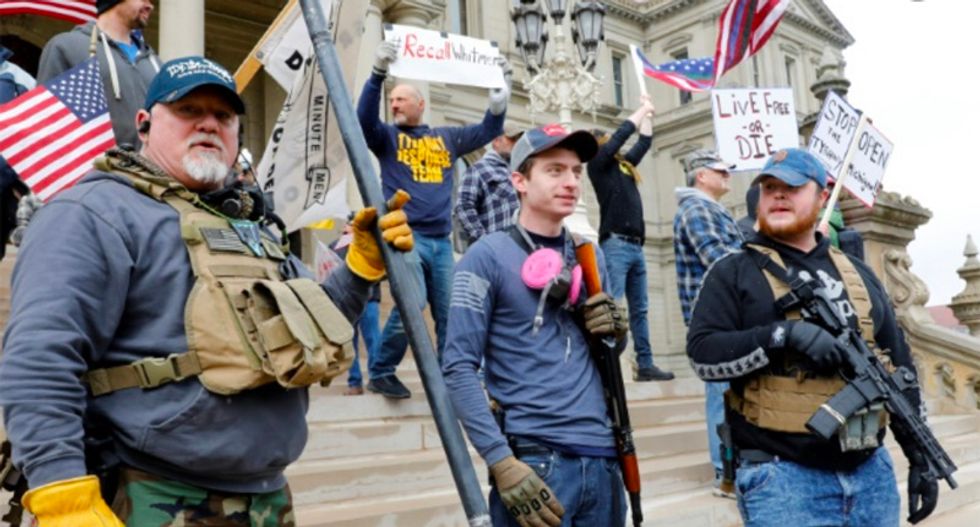 Lock-down protesters via AFP
Welcome to another edition of What Fresh Hell?, Raw Story’s roundup of news items that might have become controversies under another regime, but got buried – or were at least under-appreciated – due to the daily firehose of political pratfalls, unhinged tweet storms and other sundry embarrassments coming out of the current White House.

Donald Trump threw another tantrum this week, maniacally tweeting in all caps, "LIBERATE MICHIGAN," "LIBERATE VIRGINIA" and so on. On their face, the tweets amounted to the Commander-in-Chief inciting rebellion, which is a felony.  The regime naturally denied this interpretation, but as NBC reported, the message "pushed many online extremist communities to speculate whether the president was advocating for armed conflict, an event they’ve termed 'the boogaloo,' for which many far-right activists have been gearing up and advocating since last year." What could go wrong?

As crazy as all of that seems, it's easy to overlook the fact that Trump was encouraging people to rebel against state governments for complying with Trump's own stay-in-place guidelines. While he "has expressed confidence in recent days that some states with smaller outbreaks could begin a return to normalcy even before the April 30 expiration date for the administration's most recent social distancing guidance," according to Politico, it is obviously not yet April 30. This is roughly akin to an unhinged, dimwitted Abraham Lincoln urging South Carolina to secede.

But coherence, or lack thereof, doesn't matter. This entire "uprising" is a propaganda campaign coordinated by the Republican Party, various corporate-funded advocacy groups and "the Proud Boys, conservative armed militia groups, religious fundamentalists, anti-vaccination groups and other elements of the radical right," according to The Guardian, and promoted relentlessly by Fox News and other conservative media outlets.  The Michigan protest, for example, "was organized by the Michigan Conservative Coalition, which Michigan state corporate filings show has also operated under the name of Michigan Trump Republicans. It was also heavily promoted by the Michigan Freedom Fund, a group linked to the Trump cabinet member Betsy DeVos."

The people who attend these media events aren't "paid protesters." It isn't hard to round up a few dozen knuckleheads who believe Trump and the schmucks on Fox over public health experts and will stand on the street with a sign gratis. But polls show that overwhelming majorities of Republicans oppose reopening businesses and schools before we have the capacity to contain the outbreak. Overall, "only 10 percent of voters surveyed in a POLITICO/Morning Consult poll support ending social distancing to stimulate the economy," and that was true of just 19 percent of Republicans.

This is the tea party model, in a nutshell. GOP operatives come up with the messaging and organize the protests, and then sell them to the media as evidence of a major grassroots uprising against Democratic policies. The original tea parties were promoted around Obama's stimulus package, and a modest expansion of public healthcare and the deficit. This time it's stay-at-home-orders. The fact that they're railing against (mostly) Democratic governors for complying with the Trump regime guidelines may cause a bit of cognitive dissonance, but nothing that Sean Hannity can't smooth over.

They're using the tea party playbook because it works. Once again, the media have fallen for this scam, running headlines like "A ‘Liberty’ Rebellion in Idaho Threatens to Undermine Coronavirus Orders" (NYT), "After Grassroots Uprising, AZ Governor Issues Stay-At-Home Order To Prevent Spread Of COVID-19" (Forbes) and "Revolt brewing over governor's 'Safer at Home' order" (NBC). And many of us (myself included!) help amplify the message when we express our outrage over people putting our families at risk so they can go to Applebees or mock protesters clad in PPE.

People are rightly worried about contracting COVID-19, and a few hundred COVID-Truthers in MAGA hats does not make a "rebellion" or "revolt." Trump's just playing his role in a concerted campaign to shift blame for the regime's bungled response, which is responsible for 90 percent of the country's projected deaths--according to one estimate--and the tanking economy onto Democratic governors.

Yet all the caterwauling and propaganda in the world won't change the fact that we need three times as much testing capacity as we currently have before we can even consider opening up the economy safely.

The regime is muzzling public health officials, according to Margaret Sullivan.

Kathryn Foxhall remembers a time when reporters could call up any doctor or researcher at the Centers for Disease Control and ask them questions on the record....

Foxhall watched with dismay as that openness disintegrated radically over the past two decades. Federal agencies, including the CDC, began to require media inquiries to go through a public information officer. Direct contact was minimized and tightly monitored. Interviews might take place with a public-relations “minder” present.

We still don't know exactly what their angle having the federal government waylay much-needed medical supplies, but a hospital executive reports in The New England Journal of Medicine that he and his team had to practice some spycraft to obtain PPE, including marking trucks delivering the supplies as food-service vehicles  "Before we could send the funds by wire transfer, two Federal Bureau of Investigation agents arrived, showed their badges, and started questioning me," he wrote.

In related news, "a secretive Trump administration project that enlists private companies to bring masks and other medical equipment to the U.S. to fight the coronavirus outbreak has provided tens of millions of dollars in taxpayer subsidies to the nation’s largest medical-supply companies with little public accounting." [LATimes]

The Washington Post reports that "the names of businesses that collectively will receive hundreds of billions of dollars in coronavirus relief from the federal government may not be disclosed publicly, and critics say that could make the massive spending program vulnerable to fraud and favoritism."

According to Bloomberg, while the relief package mandated a five-member Congressional oversight panel to keep watch over those $2 trillion, so far it consists of one former Warren staffer named Bharat Ramamurti.

As tens of billions of taxpayer dollars from the $2.2 trillion relief bill begin flowing out the door, Ramamurti remains the lone member appointed to the panel. With no colleagues, no staff, and no office, he’s had to rely on one of the few avenues he has to communicate with the public: his unverified Twitter feed.

We hope you got your $1,200 check from the federal government, and are putting it to good use.

"About 43,000 taxpayers who earn more than $1 million annually" are getting $1.7 million each, on average, according to The Washington Post. They'll split up "more than 80 percent of the benefits of a tax change tucked into the coronavirus relief package Congress passed last month." It was inserted into the relief bill by Republicans.

Is the regime's war on migrants spreading COVID-19? Looks like it.

I heard the word "negligence" over and over while reporting on deportation flights. Now, Guatemala health ministe… https://t.co/f19SqtV9vi
— Monica Campbell (@Monica Campbell) 1586924152.0

Here's Esquire's Charlie Pierce on Trump's short lived plan to launch a radio talk -show, which he reportedly abandoned only because he didn't want to compete with Rush Limbaugh.

"Fourteen city governments say the president’s campaign now owes them a collective $1.82 million," according to The Center for Public Integrity, but "the campaign says it’s not responsible."

This, via Rolling Stone, is fascism, plain and simple:

All 12 of the jurors in the Roger Stone case have expressed fear in court filings on Wednesday. They worry they will continue to be harassed and they fear for the safety of themselves and their families if their identities are revealed.

According to The National Law Journal, jurors cited tweets from President Trump and remarks from conspiracy theorist Alex Jones as the reason “the threats to the jurors’ safety and privacy persist” after the trial ended in November.

One juror wrote, “I try to stay away from danger, but now it seems like the danger is coming to me.”

Trump threatened Wednesday to try to force Congress to adjourn so he could fill his administration’s vacancies without Senate approval, the second time this week he has claimed unprecedented executive authority amid the coronavirus pandemic.

The president cited a never-exercised constitutional power to shut down Congress if the House and Senate are in disagreement over adjourning, pushing both the executive and legislative branches into uncharted territory. [WaPo]

And we'll leave you with something that happened this week that wasn't awful!

The controversial Keystone XL tar sands pipeline has been dealt a major setback, after a judge revoked a key permit issued by the US army corps of engineers without properly assessing the impact on endangered species.

In a legal challenge brought by a coalition of environmental groups, a federal judge in Montana ordered the army corps to suspend all filling and dredging activities until it conducts formal consultations compliant with the Endangered Species Act.

The ruling revokes the water-crossing permit needed to complete construction of the pipeline, and is expected to cause major delays to the divisive project. [The Guardian]