USNS Comfort has 1,000 hospital beds to help with New York’s crisis — but only 3 patients: report 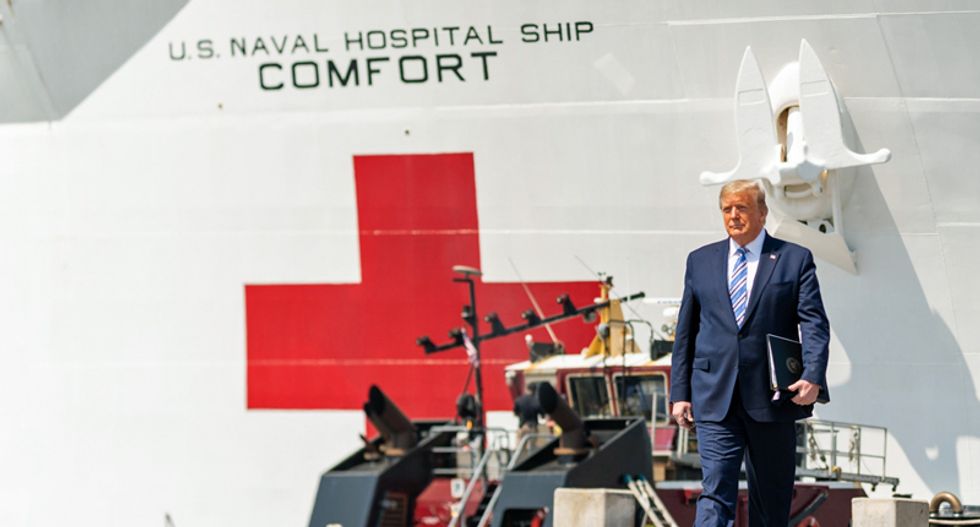 Presdient Donald Trump announced to much fanfare that he was deploying two U.S. Navy hospital ships to help New York deal with the COVID-19 pandemic. But the two ships are only serving 18 patients in total.

"Such were the expectations for the Navy hospital ship U.S.N.S. Comfort that when it chugged into New York Harbor this week, throngs of people, momentarily forgetting the strictures of social distancing, crammed together along Manhattan’s west side to catch a glimpse," the New York Times reported Thursday.

"On Thursday, though, the huge white vessel, which officials had promised would bring succor to a city on the brink, sat mostly empty, infuriating local hospital executives," the newspaper explained. "The ship’s 1,000 beds are largely unused, its 1,200-member crew mostly idle."

"Only three patients had been transferred to the ship, officials said, even as New York hospitals struggled to find space for the thousands infected with the coronavirus," The Times reported. "Another Navy hospital ship, the U.S.N.S. Mercy, docked in Los Angeles, has had a total of 15 patients, officials said."

“If I’m blunt about it, it’s a joke,” he explained. “Everyone can say, ‘Thank you for putting up these wonderful places and opening up these cavernous halls.’ But we’re in a crisis here, we’re in a battlefield.”

The Navy has banned the Comfort from treating coronavirus victims.

"On top of its strict rules preventing people infected with the virus from coming on board, the Navy is also refusing to treat a host of other conditions. Guidelines disseminated to hospitals included a list of 49 medical conditions that would exclude a patient from admittance to the ship," The Times reported. "Ambulances cannot take patients directly to the Comfort; they must first deliver patients to a city hospital for a lengthy evaluation — including a test for the virus — and then pick them up again for transport to the ship."