'Was he sober?' MSNBC's Mika 'absolutely speechless' after Larry Kudlow says it's 'cool' to work during pandemic 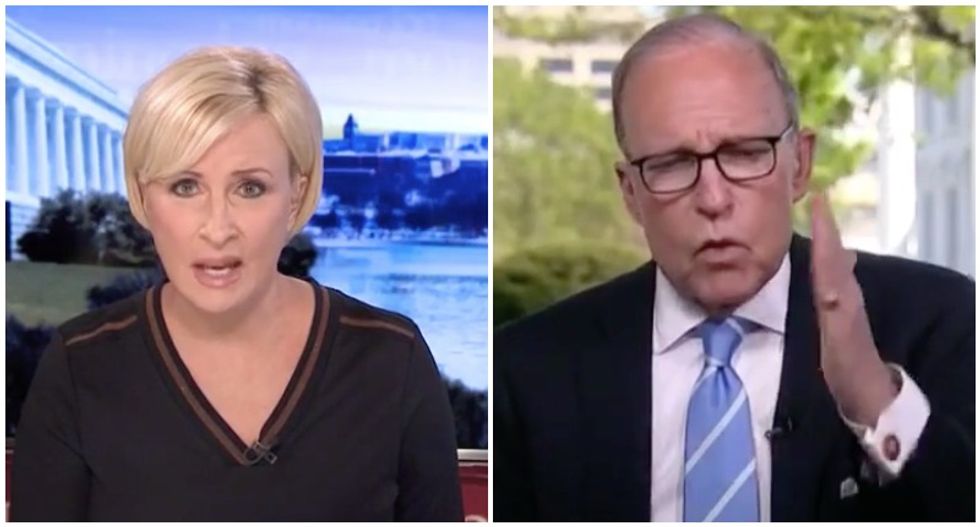 MSNBC's Mika Brzezinski was left speechless after watching a clip of White House economic adviser Larry Kudlow telling Fox Business that going back to work during a pandemic was "cool."

Kudlow appeared Thursday on Charles Payne's program on Fox Business, where he suggested that Americans were staying home from work during the coronavirus outbreak because they were lazy.

"For a whole bunch of years, you can see it in the labor numbers, people didn't want to work," Kudlow said. "I think, if I may, it's cool to work. Your neighbor, your brother-in-law, you know, the guy down the street, working has become cool again. If you looked, one of my favorites was the millennials, the youngsters. Their participation rates and job increases were phenomenal before this virus came in. You know me, I also think work is a virtue. It is a godly virtue, as well. I believe it's been cool to work, and people are going to want to come back."

Brzezinski sat there for a moment with her mouth agape when the clip ended, and then asked MSNBC's Stephanie Ruhle for some insight because she knows Kudlow.

"I'm absolutely speechless," she said. "What the heck was he saying? Was he sober, I ask with deep honesty. I mean it, was he okay? Was he okay?"

Ruhle admitted she couldn't say, and tried to make sense of the White House adviser's remarks.

"This isn't about whether people want to go back to work or not," Ruhle added, "or if this administration -- when they say, 'We're open for business, we want to get back out there,' that is a sentiment. Remember, the president didn't send everyone home. The first to make these decisions were businesses. It was Adam Silver and the NBA who put health experts in charge and said, 'This isn't safe.' What's really important to remember right now, when the president is saying, 'Why don't people want to go back to work, why are Democrats blocking this,' that's not what it is. This is a health crisis."