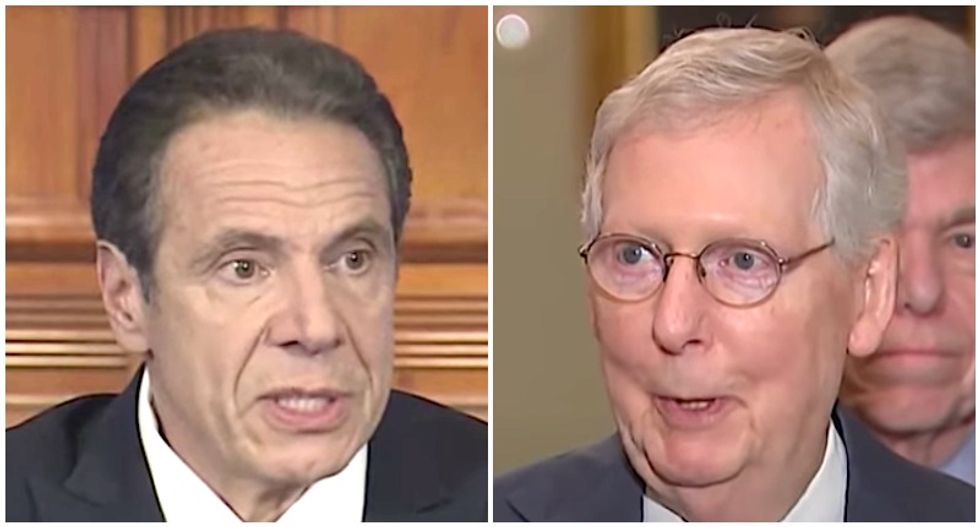 During his usual TV coronavirus briefing this Thursday, New York Governor Andrew Cuomo ripped into Senate Majority Leader Mitch McConnell over his comments that states should be allowed to declare bankruptcy instead of getting unrestricted funds from the latest coronavirus relief package.

According to Cuomo, "this is really one of the dumb ideas of all time," adding that not funding state and local governments is "incredibly short-sighted' Cuomo went on to say that McConnell's plan ignores police and fire departments, teachers and schools.

"How do you not fund police and fire and teachers and schools in the midst of this crisis?" Cuomo asked incredulously.

Cuomo then turned to McConnell's contention that this is a "blue state bailout."

"How ugly a thought," Cuomo fumed. "Just think of that he's saying ... 15,000 people died in New York, but they were predominantly Democrats, so why should we help them? I mean, for crying out loud, if there was ever a time for you to put aside your pettiness and your partisanship and this political lens that you see the world through ... that's not who we are."

Later during the briefing, Cuomo referring to McConnell as a "self-proclaimed grim reaper."