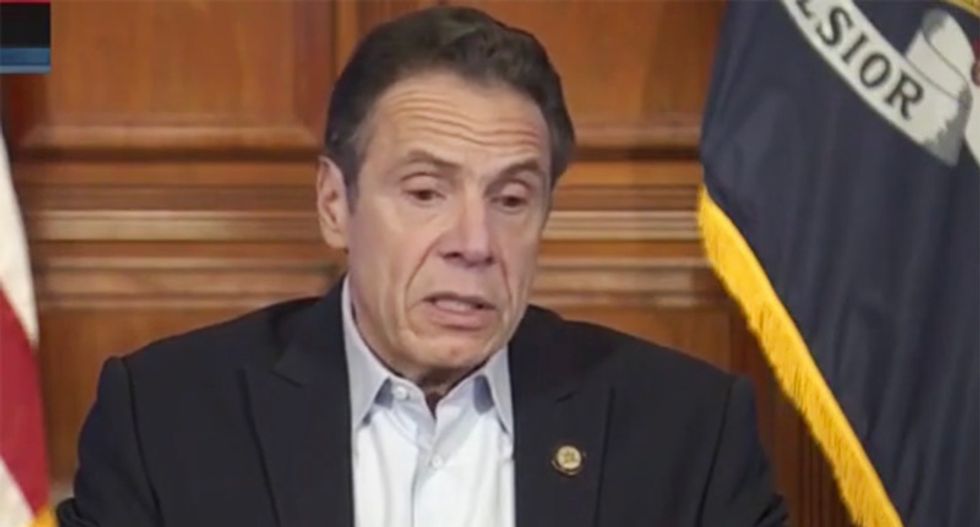 During his now daily national address, New York Gov. Andrew Cuomo poured cold water on pro-Trump conspiracy mongers who claim the pandemic is subsiding, the death toll will be lower, and the country should open up to economic activity as soon as possible

As the governor explained, "You start to hear this dialogue on reopening and you start to hear people with political theories on whether we should reopen fast or whether we should reopen sooner, why are people against reopening, why are people in favor of reopening? That is corrosive and destructive and if we don't stop it, it will feed on itself. and there are no political conspiracies here."

"All the projection models have basically said the same thing," he continued. "Everyone has basically said the same thing which is, first of all, no one has been here before. Second of all, everyone, all the experts -- I didn't have an opinion because I'm not an expert -- but all the experts had higher projection numbers than we've actually experienced."

After citing multiple studies, he explained, "All of those models were projections, they all said depending on what people do -- not even government -- what people wind up doing. But it wasn't just these academic private organizations. The White House task force was talking about 1.5 million to 2.2 million deaths without mitigation. With mitigation, 100,000 to 240,000 deaths as the best-case scenario. This is the White House task force -- the actual has now been adjusted down, but they are still at 60,000 deaths that they are projecting."

A self-professed white supremacist from Maryland was arrested for storming the U.S. Capitol after receiving permission from his parole officer to travel out of state.

Bryan Betancur was taken into custody Sunday after his GPS monitor placed him inside the Capitol during a Jan. 6 riot by President Donald Trump's supporters, after he told his parol officer that he'd taken part in the violent action and was paranoid the FBI was watching him, reported WJZ-TV.