WATCH: John Oliver tries to 'cast out' right-wing media like a televangelist 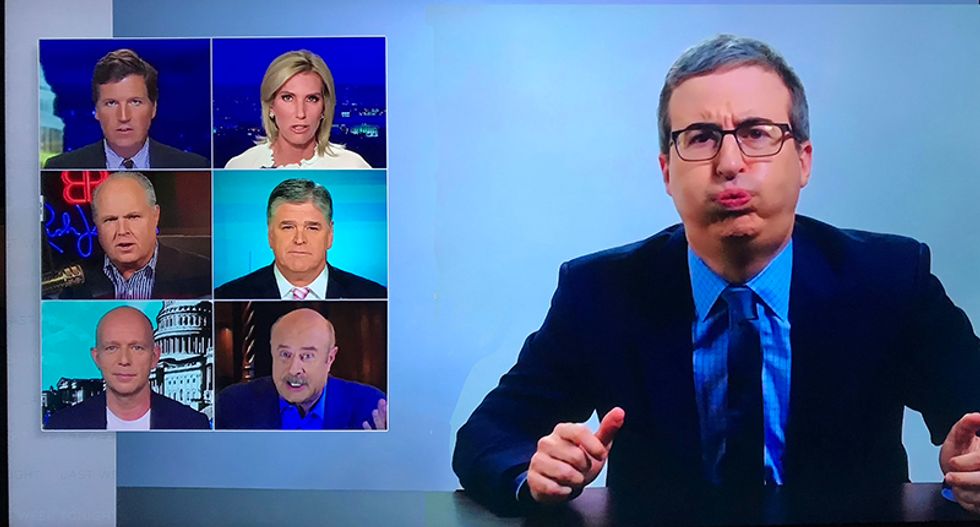 "Last Week Tonight" host John Oliver appeared Sunday while still quarantining from what he refers to as his "white void."

He returned to talk about coronavirus, noting that it's hard to keep up with the information and misinformation about COVID-19. For example, microwaving your mail doesn't save you and don't buy breast milk, it isn't a cure.

Oliver turned to bash the protesters that were outside of state capitols over the weekend, demanding an end to the lockdown during the pandemic.

"It will force us to stay at home longer!" Oliver exclaimed. "How could people possibly believe sh*t like that?"

But the bad information people are absorbing is coming from three major sources, he explained.

His first example: TV preacher Kenneth Copeland, who "took care" of COVID-19 weeks ago by "blowing the wind of God from you." He explained that his spell would destroy it forever, and it would "never be back."

Televangelists are just one of the many places people can get information. There was the conspiracy theory that 5G gives it to you, prompting people in the UK to set fire to cellular towers. Such BS comes from lies on the internet that people read on message boards and somehow believe are true.

But the main cause of misinformation is conservative news, Oliver explained.

Rush Limbaugh, for example, has been saying that the coronavirus was nothing more than "the common cold." He claimed that it was the 19th coronavirus and that there have been 18 before it. As Kellyanne Conway learned this week, COVID-19 stands for corona-virus-2019.

Oliver noted that it has been easy for people in conservative media to fold COVID into their conspiracy theories they've been sowing for years. Fox News, for example, tried to downplay the warnings and deaths, claiming that it was all a lie from the liberal media. The problem, of course, is that as the virus spread, the numbers are spiking, and their own viewers are dying.

The network welcoming on Dr. Phil, who was trending on Twitter for almost two days after he claimed coronavirus, wasn't as dangerous as car crashes, smoking deaths, or drownings. He didn't even get the number right for the people who die of drowning, which he claimed was over 300,000. In fact, it's only 4,000.

Now Fox is on the move for promoting an unproven drug used to help cure Malaria and to treat things like Lupus. Tucker Carlson welcomed on a guest who was an "adviser to Stanford University," which proved to be news to Stanford, who said they'd never heard of the guy. But Carlson touted him as some kind of expert on the drug hydroxychloroquine.

Oliver said it's easy to write off people like Limbaugh or Fox News, but they draw a massive million-person audience to hear the nonsense. Sean Hannity similarly has been spreading lies like claiming hydroxychloroquine can save people's lives because after taking the drug, they got over coronavirus. Oliver explained that someone he knows ate a hotdog and didn't even get COVID, so it clearly is the miracle cure people have been waiting for.

One trick Oliver hasn't tried to get rid of the right-wing media is to blow on them like Kenneth Copeland did to banish the coronavirus. So, he gave it a shot. It's unclear if it will work.

Watch his takedown below: